When I heard that Don Rickles had passed away today, my first thought was "Oh now Mr. Potato Head from the Toy Story movies!"   But then I remembered that the Beatles had an encounter with him when they were in Miami Beach in February 1964. 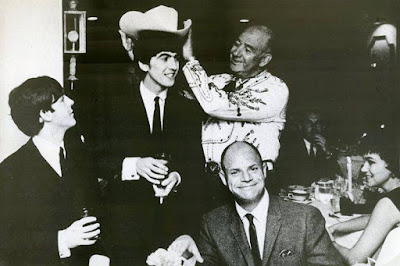 Story found in the book The Beatles are coming! by  Bruce Spizer page 198

After returning to the Deuville at approximately 11:00pm, the group headed to one of the hotel's night clubs to see comedian Don Rickles, whose routine consisted of launching insults at members of the audience.  Everyone was fair game, including little old ladies and, of course, the Beatles and Sgt. Dresner.  "Look at this.  A police sergeant guarding four Zulus when all over the city there's fighting and burglary going on."   Although the Beatles laughed along with the audience each time Rickles took aim at them, they were not amused.  The group was trying to keep a low profile and resented being publicly embarrassed by the comedian.  George thought it unfair that only Rickles had a microphone.  "If we'd had him on our own terms we could have made mincemeat out of him."