It is interesting to see how George's attitude and security measures changed after December 1980.  We have read stories where fans just walked right through the gates and up to George's front door, but everything changed after John's murder.   George's attitude towards the fans made a drastic change (and rightfully so) as you see in this story.    While George was short with the girls who had traveled to see Friar Park and hopefully him, he was still kind to them and didn't yell or anything. 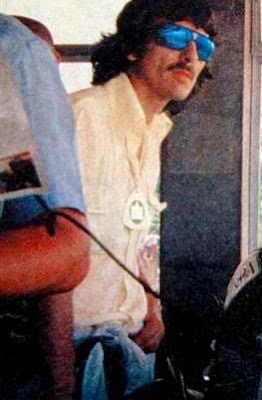 With a little Help from my Friends
July 1981

It was Sunday,  19 July 1981, in Henley.  I was there with a German Beatle friend who had never seen any of them before.

We went by where George buys his cars and took the obligatory photos through their window (there are photos of George on the wall).    The place was closed, being Sunday.  We went up to Friar Park, and saw George’s brother Harry’s son, Paul, come in on his motorbike.  We walked up along the side (Paradise road) to where you can see a bit of George’s house through the trees.  There were a Landover, a small brown or black car and another car that we could see.    We went back to the front, and saw a woman at the front house again.  After a little while , two cars pulled up together, one behind the other.  A woman got out of the front seat of the front car to ring the buzzer (the gates are now electronically operated – since December, perhaps?) so they could get in.  In the back seat of that front car was Olivia with Dhani on her lap.  Dhani has certainly grown up!  He really doesn’t have a baby face anymore.  His face has gotten thinner and longer (if you know what I mean), kind of like his dad!  Olivia didn’t seem overly friendly.  She told us “He won’t be out today.  I guarantee you won’t see him today,” and other such niceties.

The gates opened, and as they started to drive in, the gates closed on the car!  It took everything I had in me not to laugh.  The same woman got out and rang back and I thought I heard her say, “George.” The gates reopened and both cars went in.  In the first car in the front seat was a man driving, and the buzzer-woman, in the back seat, Olivia and Dhani.  In the second car, it looked like two adults and three kids maybe between 7-10 years old.  Who everyone was, I have no idea.

Well, despite Olivia’s guarantee, in ten minutes out came the Landover we’d seen, with two adults and one child in the front, and two adults and two children in the back.  The man in the back could almost have been George; he was in a white jacket and hair about as long as George’s at Ringo’s wedding.  We were debating whether or not we’d just seen George when the gates opened and out drove the small brown or black car we’d seen, license plate “YOU-33.”  I knew that was George’s car.   There were two people in the car.  George was not the driver.  The driver was Jackie Stewart.  The passenger had his head turned and was talking to the driving, so we only saw the back of his head.  The shape of his head looked like George’s, but the hair was very long—much longer than I’d expected it to have grown in three months since the wedding.  So we weren’t sure, once again, if we’d seen George or not.

Five minutes later, the same car comes back.  This time, no doubt, it was George!  We were on the driver’s side of the car, and George leaned over and asked if we “could please not hang around here.  It’s not a public place or something.”  Well, I could hardly do anything aside from standing there and grinning.  I mumbled something about not wanting to annoy him, just wanting to stop by and say hello.  It was all real fast.  I didn’t take a photo or anything.  George had a little remote control thingie to open the gates so he didn’t have to step out of the car.  The gates opened and they drove on in.
I was so happy to have seen him at all, but also sorry for having bothered him.  He’s always been somewhat sensitive at having fans there, and I had no idea of how he’d react now, after December.  But he looked absolutely fantastic, with the long hair and still the mustache, that I can’t help but remember that day with a smile!

On the train back to London, I was reading a newspaper and saw that the Silverstone Grand Prix had been the day before; maybe that was why he had all the company and was therefore less than thrilled to see fans.  Anything for a little reassurance.

Email ThisBlogThis!Share to TwitterShare to FacebookShare to Pinterest
Labels: 1981, fan memory, George Harrison, With a little help from my friends