4 Reasons why People in America were so upset by John Lennon’s “Jesus Statement”
By Sara Schmidt
August 2, 1966

50 years ago The Beatles’ music was banned and countess Beatles’ records were burned as a response to a statement John Lennon made to an English newspaper.   John’s “Jesus statement” controversy has been analyzed and written about numerous times over the years that there is no need to rehash the story; however, what I wanted to understand is WHY Americans got so upset over a remark made by a pop star in a teen magazine.  But before we discover why, let’s look at a little background information first. 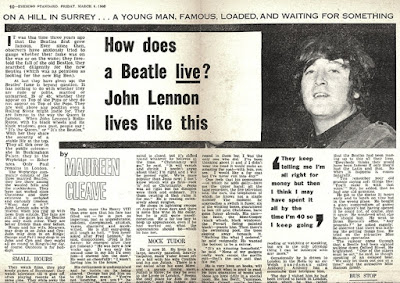 Maureen Cleeve was a journalist and friend of the Beatles.  During the spring of 1965, she interviewed all four Beatles and Brian Epstein separately at their homes for a series of articles that were published in the London Evening Standard in March of 1966.   Parts of John’s article, which included his quote about Jesus, was also published in the San Francisco Chronicle that same month.    Tony Barrow offered the four Beatles articles to Art Unger of Datebook magazine.  The Beatles particularly liked Datebook because it was much more progressive than the other teen magazines of the day.   It featured stories about race relations, teenage pregnancy and the effects of LSD among the latest news about music and film stars.    Unger purchased the rights to the articles and saved the stories on John and Paul for the September 1966 issue, which came out on July 31, 1966.   This issue was called the “shout-out” issue and it featured proactive quotes from seven people including John Lennon and Paul McCartney. 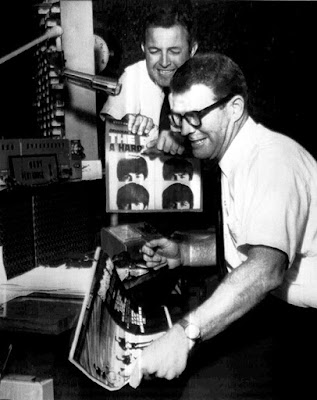 In Birmingham, Alabama WAQY radio DJ’s Tommy Charles and Doug Layton went on the air talking about what John Lennon had said in Datebook as part of their morning show.   They regularly read headlines from newspapers and magazines and discussed them.   They made a decision after receiving a few calls from listeners to ban all Beatles records on their radio station.  A reporter from UPI heard the broadcast and wrote about the Beatle banning in a story that was published in newspapers around the country.   As the story spread, more radio stations banned the Beatles’ music.  Teenagers started to express anger over what was said.   Beatle burnings were planned for former fans to get rid of their Beatles collections and the Ku Klux Klan were burning Beatles records that were nailed onto crosses and speaking out against the band. 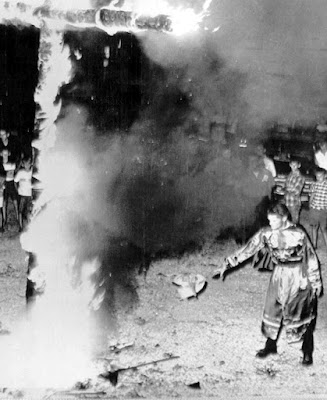 Why was there such a furor?   Why did so many Americans get so upset by a pop star saying that his band is more popular than Jesus.?

1.         Most people neither understood what John said nor what he meant
A lot of Americans, including Tommy Charles, never read the Maureen Cleeve article.  While Datebook printed the article in its entirety (except for the introduction), the people only heard the most shocking parts.  John said that the Beatles were “more popular than Jesus;” however, many believed he said that the Beatles were “bigger than Jesus,” which has a totally different meaning.  They did not understand that John was not talking about people in America, but was speaking about the Church of England, which had seen a drastic decline in numbers. 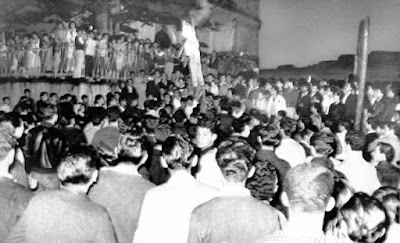 2.        They took John’s statement personally and they were hurt by it.
One girl who was interviewed by Richard Lindly for the ITV news story, “Reporting ‘66” really explained this when she said, “A lot of people are ‘good Baptists’ down here.  Everythign about religion they take very personally.”    In the same story, another girl tells Lindly, “It hurt people’s feelings. People used to think so much of them because they were for the teenager and everybody thought they were so good.  And then they came out with something like this.  It sounds like they are making fun of everything we like.”    One girl was asked by a reporter in St. Louis, Missouri about her thoughts on the matter and she said, “I liked the Beatles when they first came out, but when they said what they did about Christ, I was hurt and I don’t care for them anymore.”

The people who felt this way were fans that admired The Beatles, but also considered themselves Christians.  They felt that by saying that by saying that the Beatles were more popular than Jesus that John was bragging that the Beatles were better than Christ, an idea that insulted their core beliefs.   It hurt their feelings and angered them.  In some places teens were forced between The Beatles and Jesus, a choice that they blamed The Beatles for making them have to choose.

3.        It was Anti-American
At first glance, the thought of a group of British singers being called “Anti-American” is laughable.  However, those who felt this way were very serious.   From their point of view, the Beatles became popular and made all of their money because of their American fans.  John’s statement was an insult to Christian and therefore towards America, the place that made them famous.   In “Reporting ‘66” one girl adamantly proclaimed, “I’m a Christian!  So many people have built buildings in the name of Christ.  What have the Beatles done for us?  We’ve done more for them!  We don’t owe them a thing.  We shouldn’t just sit back and take it.”   One person wrote a letter to the Chattanooga Free Press stating, “Americans favor the bais of the religion that founded our country, not a group of young men suffering from a serious lack of responsibility, respect and Moravian conviction.”    And one woman named Patti told the Desert News, “It is disgusting how the Beatles think they are so cool that they can say anything they want about the religious beliefs of the majority of Americans then come over to our country and take in fabulous sums of money.  They seem to think that they can trample over us and in everything we believe in and still be put on a golden pedestal for us to admire and worship as idols.” 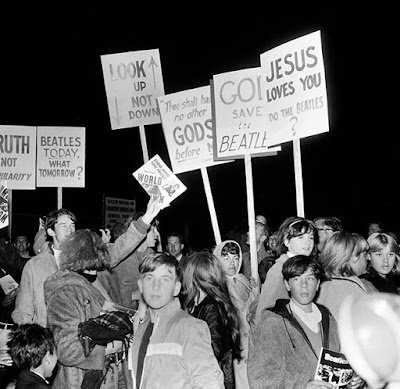 4.        The statement John Lennon made would turn teenagers into atheists and communists.
In 1966 America, 98% of the  adult citizens said they believed in God.   Times were changing and there was a fear that the next generation would turn their back on religion.  In April of that year Time magazine’s cover declared, “God is Dead,” which did not help this fear.   Closely linked to atheism was the fear of communism.   While the “red scare” of the 1950’s had mostly died down, there was still some lingering fear, especially in the Southern states that communism would one day take over the United States.   Knowing that pop stars held a strong influence on teenagers, many of the older generation feared for their children’s future after hearing about John’s remarks.  A man named Raymond told the Dessert News, “If what John Lennon said is what the Beatles believe, their belief is a high degree of atheism.   If this is so, then they should keep their beliefs to themselves while in the U.S.”   Robert Shelton, the grand wizard of the KKK told Lindly, “These individuals want to vilify Christ and come to America and still continue collecting sums of money.  I think this is a dangerous trend because I think they are concerned with the development of socialism which once you have socialism in action, it graduated into communism. 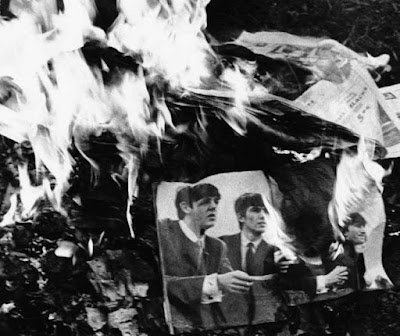 50 years later these ideas seem somewhat silly.  Many people got swept up in the drama of it all and followed the crowd.  There are some who anonymously today confess that they threw their Beatles albums in the fire during the excitement of the moment only to regret it and purchase them all over again in the following weeks.

There were also Americans that did not approve of the boycotts.  Loyal fans that agreed or didn’t care what John said and continued to purchase Beatles records and defend the Beatles in magazines and newspapers come out in droves to support the Fab 4. 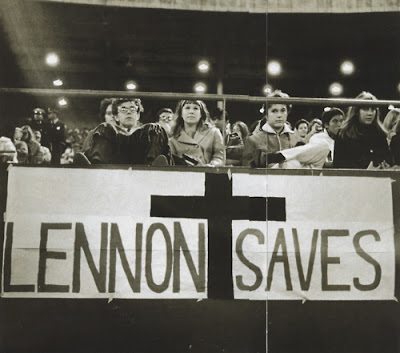 There also was a group of people that disliked what John said.  They thought he was an arrogant jerk for making such a bold statement, but they also believed that he had the right to state his opinion without being terrorized or boycotted.  As one girl in St. Louis said, “It’s his opinion and it’s wrong, but since it is his opinion they shouldn’t band their records and things.”  And another said, “I thought it was a rather vain thing for him to say, but I don’t think it should affect his performance any.”

50 years later John’s Jesus statement is still something that is discussed and written about.  In 2010 the Vatican made an announcement that the Church forgave John for saying  such a statement.

It is hard to believe that such a small statement could make such a controversy; however this phenomenon happens with people even more so today with the advent of the internet.
Posted by Sara S. at 5:32 PM