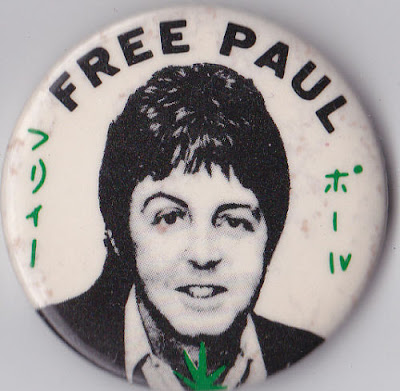 Marijuana became part of Paul McCartney’s life during the summer of 1964 and he didn’t turned away from it until after his fourth child, Beatrice was born in 2003.    During his entire marriage to Linda, marijuana was part of their life together and neither one of them seemed to think too much about it.    Their first run in with the law over pot occurred in Sweden in 1972.    They claimed that the drug was not theirs and was given to them in a letter from a fan.    They paid a fine and were free to go.     The following year, they were in trouble with the law because cannabis was growing on their farm.  Once again, they used the “fan gave it to us” excuse and said that a fan had sent them some seeds through the mail and they had no idea what type of seeds they were.    They were charged a light fee and were free to go once again.   In March of 1975 the McCartney family was traveling along in a car in Los Angeles when they ran a red light and was pulled over.     The police noticed the smell of marijuana in the car and Linda, thinking it would be easier for her as an American citizen, took the blame and was arrested.     She was let go after once again paying a fine.

In 1975, Wings was planning the “Wings over the World” tour and Japan was part of the plans for the tour.     Paul was unable to obtain a work visa in Japan because of the marijuana charges from 1972 and so the Japan part of the tour was canceled.    Fast forward to the end of 1979 and Paul has a new lineup for Wings.    A new tour is planned for the beginning of the new year and Japan is going to be the first stop on the tour.     I have read that Paul asked to sign a affidavit that he no longer  did drugs in order to be given the work visa---no idea if that is true.

We all know that whenever Paul and his family arrived in Japan on January 16, 1980, the officials at the airport opened up Paul’s suitcase and looked inside of the hood of Stella’s coat and discovered 200 grams of marijuana.     This much pot would make over 400 joints, which is an awful lot of smoking!   Paul spent 10 days as inmate #22 in a Japanese jail.    But the big question that was asked of him then and remains now is WHY.   Why would one of the biggest music stars of all time carry so much marijuana in his suitcase in a country that has strict pot laws?    Let’s look at some of the choices. 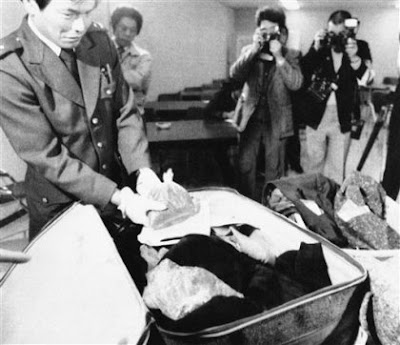 1.       1.     Paul didn’t realize that Japan had such strict laws.     This is the reason he gave once he was released.     He said  in an interview a few months later, “I didn’t try to hide it. I had just come from America and still had the American attitude that marijuana isn’t that bad. I didn’t realize just how strict the Japanese attitude is.”   I personally have a hard time accepting this statement.   Paul had to have known that Japan had strict laws.  He wasn’t allowed in Japan in 1975 because of their strict laws regarding marijuana.  His father-in-law is a lawyer and he had all sorts of people working for him.  Surely someone informed him before they left for Japan that they had strict laws.   How could he not have realized it? 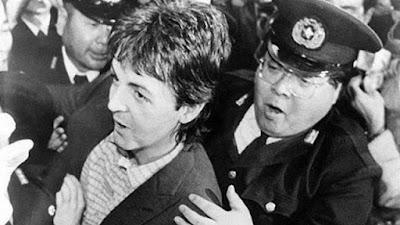 2.        2.   Paul thought he was a rock star that was above the law.     Paul said during the Wingspan time, “I was out in New York and I had all this really good grass,” he said. “We were about to fly to   Japan and I knew I wouldn’t be able to get anything to smoke over there. “This stuff was too good to flush down the toilet, so I thought I’d take it with me.”  By 1980 was Paul McCartney so famous that he believed that he couldn’t get arrested?   Those things just don’t happen to him.  That while the laws were strict, the officials would turn a blind eye to him because he was Paul McCartney who was doing a huge tour in their country and therefore would bring a lot of money? Paul talks about when the official found the pot (which wasn’t really hard to find since was laying right on top of his clothing).   “When the fellow pulled it out of the suitcase, he looked more embarrassed than me,” McCartney recalled. “I think he just wanted to put it back in and forget the whole thing, you know, but there it was. “Unfortunately, this is the theory that I think might be the closest to the truth.    Paul had gotten away with traveling with drugs more than he had been caught.    When you get away with doing the wrong thing long enough, you get sloppy with it and figure that nothing bad is going to happen to you.  Add that mindset to a famous person and you have a recipe for disaster. 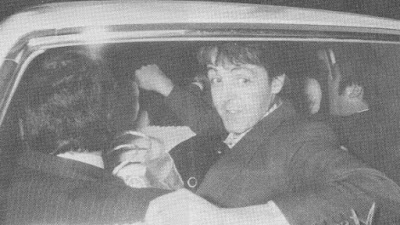 3.        3.   It wasn’t even Paul’s pot.  He was covering for Linda.      We know that Linda covered for Paul in 1975 in America, but did Paul cover for Linda in Japan?    I truly believe that the 200 grams of pot was for the entire tour---Paul, Linda and whoever else smoked it.     The stuff that was found in Stella’s hood (which was a terrible choice) was probably Linda’s, but the stuff in Paul’s luggage had to have been for everyone.    Why would Linda stash her stuff in Paul’s luggage?  Why would she have so much of it?    It was in Paul’s bag and therefore, Paul had to take the blame for all of it.     Linda sure didn’t keep quiet about how she felt about the ordeal,   “It's really very silly. People certainly are different over here. They take it so very seriously. Paul is now in some kind of detention place and I have not been allowed to see him. As soon as they get someone nice like Paul, they seem to make a field day of it!  I'll never come back to Japan again. It's my first trip and my last!”

4.      4.     Paul is just plain stupid.    Paul saying about himself in the Wingspan promo material, “I think I was just stupid and I paid the penalty.”   And his former bandmate, John Lennon seemed to have shared this thought with what he had to say about it when it happened   “If he really needs weed, surely there’s enough people who can carry it for him. You’re a Beatle, boy, a Beatle. Your face is in every damn corner of the planet. How could you have been so stupid?  The thing is that Paul McCartney is NOT a stupid man.   He had been dealing with pot and traveling for at least 15 years by this point. 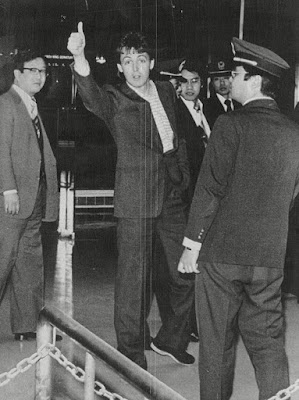 5.       5.    Yoko set him up.     This is the theory that I find to be funny.    This theory is that when Paul was in New York prior to the Japan trip, he came over to the Dakota and was talking about this great pot he had gotten ahold of.    He also talked about how he was staying at the Presidential Suite at John and Yoko’s favorite hotel in Tokyo.      Supposedly Yoko was so outraged that Paul and Linda were going to stay in HER suite that she contacted the authorities in Japan prior to the McCartney’s arrival and tipped them off about the pot in his bag.       I have also heard a variation of this story that says that Paul stopped by the Dakota and had his luggage with him and Yoko planted the pot in his luggage and then tipped off the authorities.       I find this theory to be completely foolish.    First, just because Yoko is Japanese, it doesn’t mean that she has any type of “pull” with the authorities at the airport in Tokyo.     Second, we know that Yoko can be eccentric and superstitious, but really why would Paul and Linda staying in the suite that her and John always use make her so mad?  It isn’t like they were going to be over there themselves and wanted to stay in it.   Surely, she would know and understand that the hotel allows other guests to use the room when she and John aren’t in Japan.    This seems like such a silly reason for someone to make someone go to jail, although the people that believe this happened also believe that Yoko was trying to keep John and Paul away from each other so that she would make an album with him and not Paul.   Give me a break! 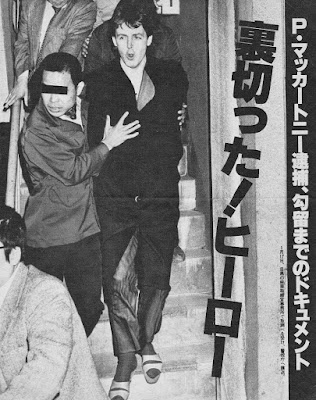 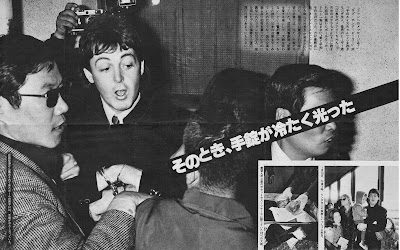 6.       6.    Paul subconsciously brought the pot into Japan to break up Wings.   Paul himself was asked the question if he had brought pot into Japan in order to get out of doing the tour and breaking up the band.   He thought it could be a possibility,     "I think that it might, psychologically, it might have been that. There might have been something to do with that, because I think I was ready to get out of Wings. I think also, more importantly, we hadn't really rehearsed much for that tour, and I felt very under-rehearsed. I cannot believe that I would have myself busted and put in jail nine days just to get out of a group. I mean, let's face it, there are easier ways to do it than that -- and also having to pay a million (British) pounds to the promoters in default. I think the only thing; it might have just been some deep, psychological thing. It's a weird period for me."  I think that ending the group was an after-thought.    While he was sitting in the jail cell, doing nothing for the majority of the time there, he had time to think.  And maybe what he thought about was how he needed to end Wings and focus on his family and work solo for a while.   Who knows? 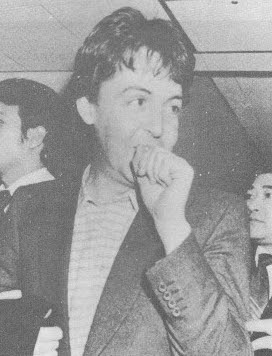 Regardless of the reason why, bringing marijuana into Japan was one of the dumbest things one of the Beatles ever did.  Paul himself doesn’t seem to understand why he did it, so I suppose we won’t ever really know either.
Posted by Sara S. at 7:35 PM