The tale of the Egg Men 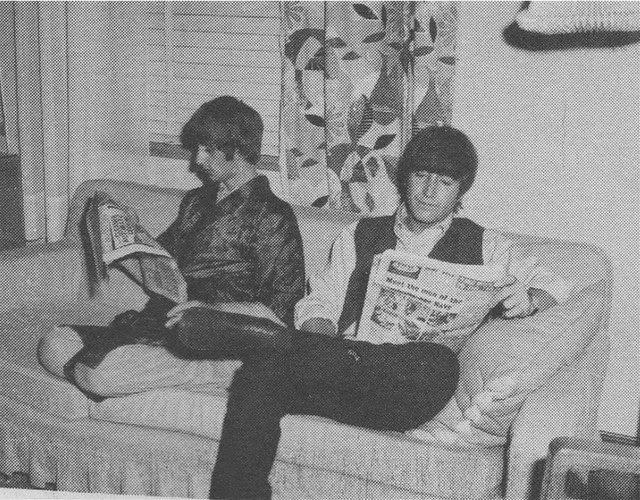 The 2nd day the Beatles were in Brisbane, someone named Peter Rossini called Derek Taylor and said that he was a local student and he represented the group of people who threw the eggs at the Beatles.  He told Derek that it was done as a protest against materialism.   So Derek invited them up to the Beatles hotel room and talk to them in person.   They sat down and were give Cokes to drink.  In an interview with Ian Townsend, one of those students named Susan gave an interview.

IAN TOWNSEND: The throwing of the eggs shocked The Beatles, who put an ad in the paper, and on the radio the next day, calling for the egg throwers to come forward. A Brisbane girl, Susan, and her two friends owned up, even though they weren’t the culprits.

SUSAN: We actually didn’t have any real interest in The Beatles, it was just that everyone was trying to get in to meet The Beatles and so we thought, well, we can do it. And we were ushered up to the room and in a short conversation, we said, well we’d better be going. And they said, oh no, don’t go – stay and talk to us because we’re bored. They just wanted people to talk to. Because they couldn’t go out because the hotel – Lennon’s hotel was just surrounded by screaming teenagers. But see while we were there, the real egg throwers arrived.

IAN TOWNSEND: The real culprits were a group of university students. Bob Katter, now a veteran stirrer and Independent MP for the Federal seat of Kennedy in North Queensland, has only now come forward with the full story.


So the first group that came forward were not the "egg men" after all, just curious students who wanted to meet the Beatles.  The true egg throwers came in the room and they did not have chairs to sit in nor were they given Cokes to drink.

Ten years ago, one of the culprits  came forward to tell his story:

And John Lennon just sat there saying, “everywhere we go now, we’re going to have eggs thrown at us. Everywhere we go.” And finally the sort of coup de grace of the whole thing, he kept you know, saying you know, “are you going to apologise” and I kept explaining someone’s got to do something against this Beatlemania, I mean the world’s going mad. We can’t have this sort of stupidity. And so we’re having this ridiculous argument. Of course, time’s slipping away, and they’ve got to have time for the concert, and Garry Williams, who’s a very funny character, but Garry said hey look – I’ve got a bit of a problem, because I’ve got tickets to your concert, you know, and I’ve got no chance of getting in for the start of the concert if there’s huge crowds, so would you mind if I get a lift in your car with you – with 17 police motorcades, and Paul McCartney was very embarrassed and he was trying to think of all sorts of reasons why Williams couldn’t go down in the top down limousine (laughs)

But anyway, our reputations were made from that point forward. We walked around like conquering heroes for the next two or three years, you know.


Paul McCartney was quoted as saying, "We had a bit of a chat with them--more or a debate really and we all ended up friends.  We asked them why they threw eggs and they said they were sick of hearing our songs on the radio  and sick of kids screaming at us.  So John asked them why they didn't throw the eggs into the crowd if it was Beatlemania they were against."

Derek Taylor said, "Paul told the leader, 'we'll give you a few years and you'll be wanting all the suits you can get your hands on.'"

Information found:
The Beatles Down Under (book) by Glenn Baker
Transcript of the World Today broadcast from June 30, 2004  found at http://www.abc.net.au/worldtoday/content/2004/s1143737.htm