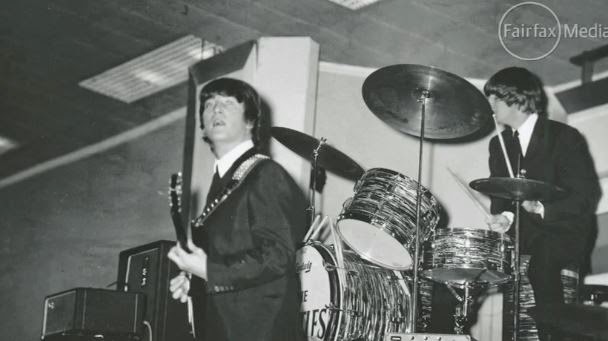 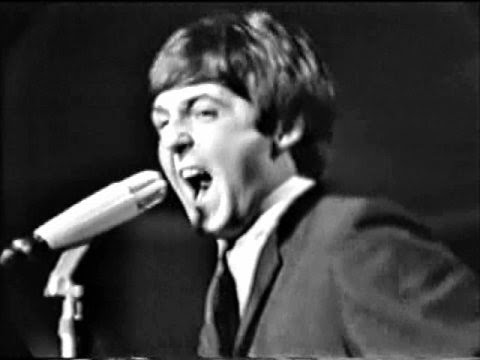 Here are some concert memories from a variety of sources


I watched John Lennon through binoculars as The Beatles sang Twist and Shout at their concert at Festival Hall in Melbourne. Couldn't hear a thing over the screaming fans. Slept outside the Atheneam Theatre to purchase tickets to 'A Hard Day's Night' - my bedroom ceiling was wallpapered Beatle pictures, I was a devoted fan!! I miss John's wit and commentary on the state of things political and loved 'The Bag' protests with Yoko.
--Kaye Separovic


"My main memory is of sitting there (eight rows back from the stage) and seeing the guys on stage," says Inge.
Can she remember the screaming?
Yes, but "I was so focused on getting in there and seeing them that the rest is a bit of a blur".
"My main focus was to see my heroes and experience them live."
Inge believes she was at The Beatles' first Melbourne concert, which the media went on to report was the only one where the music could be heard above the screaming.
A sound-level check by an acoustics expert at one of the Australian concerts revealed the screams were louder than a Boeing 707 in full flight.
This prompted one reporter to write:
"If you've never heard the screams of Beatles' fans, borrow a Boeing 707, put it in your living room and start it up. It won't be quite as loud as Beatles' fans, but you'll be getting closer."
While Inge's taste in music has changed over the years, she still doesn't mind a good Beatles' song, "particularly the early songs, before Yellow Submarine".
But she will never forget that memorable trip to Melbourne.
--Inge Schilling

“I was there! I was at Festival Hall. I still have my original 1964 program. I screamed like a girl from the moment they walked on stage to the moment they left. It was the highlight of my youth spent going to concerts. It changed everything for me. They seemed like aliens. The Beatles walked on stage with their boots and haircuts and their guitars and they looked like they had stepped out of a spaceship. I remember feeling sorry for our local music scene because it was still stuck in the `50s — all the bands that opened for them were still in that look. Everything changed dramatically after that. I didn’t follow them around Melbourne as a kid, I figured I’d meet them eventually and I did. Well, I met Paul and Ringo. Paul’s the one I followed as a kid. I’ve got one of the largest private collections of Beatles handwritten lyrics in the world. I’m the only person in the world to have handwritten lyrics by all four Beatles. Ringo only wrote one song in the Beatles, Octopus’s Garden, that there’s handwritten lyrics for and I’ve got the only copy. He wrote it on Magic Christian stationery, he wrote it when he went to Sardinia on Peter Sellers’ boat. I’ve been collecting for years. I don’t tell Paul McCartney, I’m worried he’ll go after me! But I’d never sell this stuff. It’s a great investment. I love so many of their songs, especially the old simple ones like There’s a Place, and we play We Can Work It Out on stage sometimes.”
--Rick Springfield (the singer of the 80's song Jessie's girl)

“I’ve never seen anything like Beatlemania, and I’ve seen most of the big bands. By the time they arrived in Australia, Beatlemania had gone around the world. The British explosion was on, it was different to the American scene with Elvis and Little Richard. It was our music. That’s how we thought of it. I’d been buying all the records, myself and Ronnie Burns. So we were wildly excited. To use the word in the biblical sense we camped out all night for tickets. It was the first big rock concert I’d seen. I’d go with my mum to Music for the People with the Melbourne Symphony Orchestra and Hector Crawford, there were big crowds, but I remember thinking that Festival Hall was the biggest venue around. Sounds Unlimited were one of the bands on before the Beatles. They had their drum kit on stage, when the time came, they peeled the label off the drum kit and it was the Beatles’ logo and the crowd went berserk. The myth is that the screaming was so loud you couldn’t hear the band. There was a lot of screaming but you could hear the band. I could certainly hear more of the band from outside when I’d been kicked out. The security at the event were boxers I think, or they worked at the boxing, and they threw me out because I was hysterical. And I got caught trying to see them at the Southern Cross. Little did I know I’d end up working for them. Years later I told Paul McCartney at Live8 about how I tried to get their autograph at the Southern Cross. He actually asked me for my autograph. I still hold the Beatles in awe. The Long and Winding Road is still my favourite song of all time. I told Paul that too, he said “Oh dear, you’re not going to die are you?’ After I had the accident with the ladder Paul said “You almost did it!’ Luckily I can never do things successfully.”
-          Ian “Molly” Meldrum

Molly's friend that went with him to the Beatles concert has a slightly different memory:

“I was 17 or 18 when we saw the Beatles. You’ll have to ask Ian what age he was because he lies! It was a very impressionable age. The Melbourne scene had been rock and roll and folk music. The Beatles were a combination of that, so we were very drawn into it. It was such a huge phenomenon. Ian and I camped outside Myer in Lonsdale Street for a couple of nights to get tickets, we were almost first in the queue. When we got to Festival Hall there was incredible excitement. The previous day there’d been the big scene outside the Southern Cross Hotel where Ian was pushed through a window into the florist. At the concert we’d actually booked a whole row for all our friends, so about 25 seats. Ian was OK, we were sitting there, we were excited. It wasn’t like they did a two hour show, they only did ten songs. When they came onstage everyone stood up, and Ian was screaming like a girl at the Beatles on stage. A St Johns Ambulance guy came to Ian and said he was so hysterical he should go outside. I pushed Ian back down in the seat, the guy walked away. When the Beatles went into the next song Ian got up again and he was more hysterical. The St Johns Ambulance guy came back again, he was quite disturbed by Ian’s reaction. I must have clenched my fist as if to say `If you don’t calm down I’m going to thump you’. And two security men in white dustcoats came, grabbed Ian and I, put our arms behind our backs and marched us to the front door. They literally threw us outside on the street outside Festival Hall. We’d only seen three songs. We can still hear the screaming and the band, they went into Long Tall Sally, and Ian was sobbing and scratching the door of Festival Hall with his fingernails. There’s probably his scratches still in the door. I couldn’t console him but I wasn’t happy he’d got me thrown out too. But we shared in the whole experience. It was the kind of phenomenon that probably won’t be repeated. It was genuine hysteria.”
--Ronnie Burns