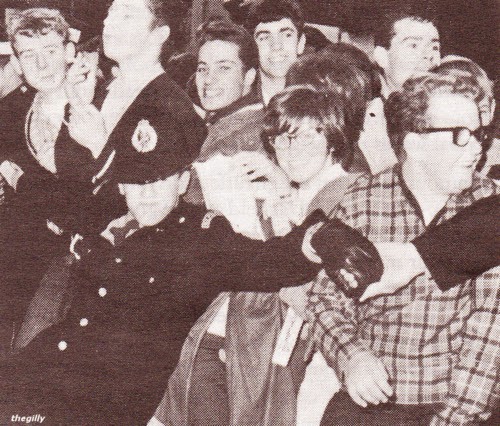 Unfortunately I could not find any photographs of the Beatles performing at Christchurch, New Zealand.   I would suspect that the concert venue was one that had a strict "no camera" policy, as many in England did in 1964, not even allowing press photos to be taken during the performance.  However, I did not want the fans memories of those performances to not be included.

Make sure to see older posts about Christchurch as well
http://www.meetthebeatlesforreal.com/2012/04/cunning-guile-and-pure-cheek.html


I was 16 and my father took me to the concert as he thought the Beatles had the most superb harmony and he couldn't wait to hear them live. No such luck - he couldn't hear a thing because of all the screaming. - Bridget, Christchurch

I went to the early show of the Beatles in Christchurch with a friend from work and his brother, all dressed in our Beatle Jackets, Beatle boots and new brushed forward hairstyles.
I remember the Police all filing in and lining the stage and walls just as the precious act (Sounds Incorporated?) were getting to the end of their time on stage.
The curtain went down, the screaming reached an entirely new level, and then, up it goes and they were there.  Even louder screaming, girls rushing the stage, even from upstairs, racing to the front .
We were seated in the middle of the front row upstairs, and from our position we could actually hear them above the noise, I am guessing we would have been among very few who could.
Later that night I met my new girlfriend who had been to the later show, and I remember she couldn't stop crying, with joy at actually seeing them live.
Next day we all joined the throng outside the Clarendon Hotel screaming for them to come out and were rewarded with a quick visit by them on to the balcony.
Then out to the Airport to see them go, the plane having to do a hurried departure as the security fence, being severely rocked by the crowd, threatened to come down and the plane being mobbed.
As I said at the beginning a wonderful time of life, 18 years old, and the whole world ahead.- Murray Butcher

My parents bought tickets for myself & twin sister Marion, which was very expensive for them.
I was disappointed because I could not hear over the screaming and felt it was a waste of money.
Looking back I still feel so fortunate to have been able to go!
When I was 13 I decided I would go to UK because of the Beatles. It took me 5 years to save up to go by ship in 1970. I stayed for 3 years, met my future husband who followed me to New Zealand.- Regards, Helen D