All four members of the Beatles have worn some pretty neat hats over the years.  I think John and Ringo especially were known for their hats.   They even made replica versions of them in the 1960's.   Recently when Ringo and his All Star Band played Baltimore, a fan named Dr. Bob (who wrote one of the single best books about the Yellow Submarine ever and if his last name wasn't so long, I would type it out) threw the hat he had on his head onto the stage.   Ringo picked it up and wore it!   You can see a video and Dr. Bob's little story about this here.

And that is pretty cool!   To think that the hat that was on your head was suddenly on Ringo's head is very neat.  If you watch the video clip, Ringo acknowledges Dr. Bob with a little bow.   Awesome!  I would have been thrilled out of my mind.  But it gets better.   On August 8, 2012, Ringo posts one of his video messages and what is he wearing?   Well yeah...a  Revolver t-shirt....but he is also wearing Dr. Bob's hat!    Alright if that was me, I would be totally freaking out!   Ringo must REALLY like that hat! 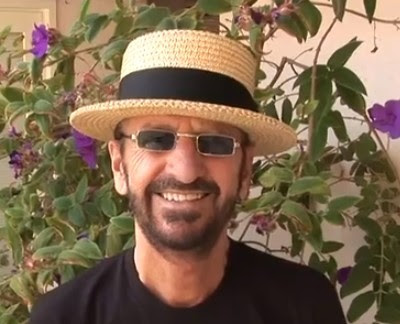 This wasn't the first time a fan threw a hat onto the stage and one of the Beatles picked it up and wore it.   A fan made this hat for Paul and tossed it onto the stage and Paul plopped it on his head.   Yet...I do not think Paul wore it after the show. 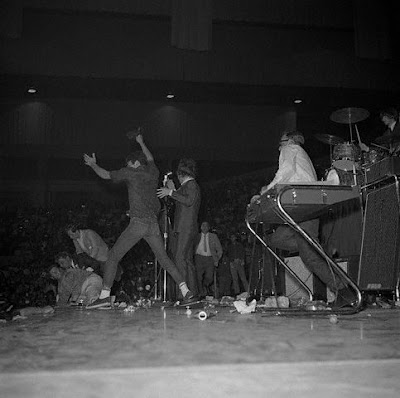 And then we can't forget that in 1965, the opposite happened to John Lennon and a fan jumped onto the stage and ripped the hat John was wearing right off his mop topped head.

So now in the past month I have written a blog post about Paul's socks and the Beatles hats.   My goodness...I need to get out more.
Posted by Sara S. at 12:03 AM