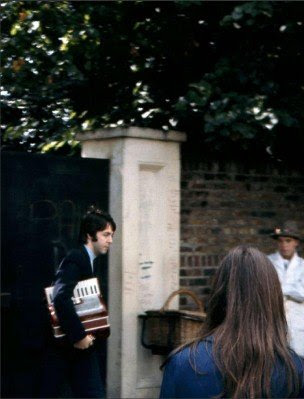 I located a "new" Paul McCartney fan photo online. The photo and the caption are from a Russian Beatles page. To my surprise, the person who posted it, posted this comment in English!

The fan photo was snapped on the 13th of August 1968 by a 18 year old Beatles fan Egil Gjerde, and speculation is that this might be the accordion from "Rocky Raccoon" on The Beatles (White Album). The song was recorded August 15th. The accordion player on Rocky Raccoon has never been documented, maybe this is the one!

It is a really neat photo because you don't always see Paul McCartney leaving Cavendish holding an accordion!
Posted by Sara S. at 6:36 PM