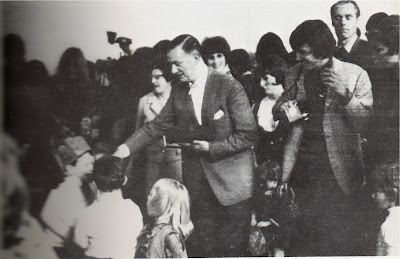 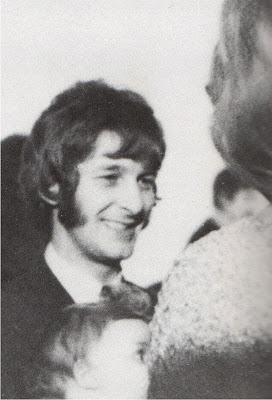 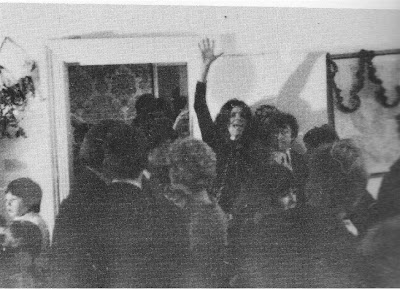 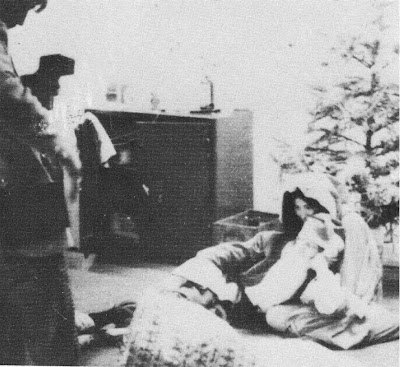 Since it is Christmas Eve, I thought I would post the story of the Apple Christmas Party as published in Beatle fan turned employee, Richard DiLello's book 'The Longest Cocktail Party'. The photos came from that book as well.

Not only was there going to be a conjurer, a Yuletide tree, acres of food and oceans of drink, but John and Yoko agreed to dress up as Father and Mother Christmas and hand out presents to all the children. The crowing glory of the elaborate, stand-up buffet dinner was a 43 pound turkey billed by the supplying butchers as the Largest Turkey in Great Britain.

December 23. Preparations had begun at nine that morning. The children's party was scheduled for 2:30 in Peter Brown's office. At six o'clock the adults' version of the children's party would being in Neil's office. By 11 o'clock the Press Office was filled to overload the Christmas-season glut of good time Charlies on their record company to record company marathon sprint for alcohol, inside talk and free LP's. Of all the record companies in London, Apple was number one on the list for abandoned cordiality and excessive generosity.

By 11:30 the Black Room was swollen to standing room only proportions with hashish smokers puffing their brains out while the front office catered to the scotch and Coke brigade. By noon all pretense had been dropped and the hash heads were indistinguishable from the juicers. The telephones that refused to quit were barely audible above the record player turned to three-quarter volume.
By three o'clock Peter Brown's office was a scene of unparalleled frenzy as more than a hundred children screamed and smashed their way through a mountain of ice cream, cake and sausage rolls, impatiently clamoring to be entertained by the ventriloquist and conjuror they had been promised.

At last Ernest Castro and April, entertainers to the Queen and Duke of Cornwall and the late Sir Winston Churchill, made their entrance. The roar of recognition form a hundred pint-sized Frankensteins just have been honeyed music to their ears. In the greatest tradition of English garden party entertainers, they lanced into their live wire routine of silvered voice projections, sleight of hand wonders and barnyard beast imitations. The eardrum-shattering squeals of delights from the youngsters did not decrease one decibel the entire length of their performance. They closed the show with a sizzling rendition of Lettuce Leaf Hop.

John and Yoko in full Christmas drag were waiting for them in the Press Office when the show let out. Mary Hopkin had joined them to lend an additional two paws to the distribution of gifts. Unrattled by the greedy stampede for toys, John Lennon stood calmly in the middle of the room, deadpan, muttering through the false beard on top of his own beard, "Ho, ho, ho."

From the reception lounge to the Press Office the party goers lined the walls and the landings, filling the building with roof-lifting talk, blue smoke and the rumble of several hundred churning, empty stomachs. The Largest Turkey in Great Britain was locked safely behind the kitchen door away from an increasingly restless crowd. The kitchen counter and sideboard were barely holding up under the weight of a thousand assorted hor oeuvres, platters of cold meat and jellied fish, salads, cakes, bowls of fruit and boiled sweets, biscuits and cheese lined the floor.

John and Yoko, freed from the burden of their costumes, sat on the Press Office floor surrounded by Emily's family (the family of homeless hippies that had taken residency at Apple). The Press Officer hovered nearby, glass in hand, cigarette in mouth, hoping that his employer would not be Beatled unmercifully on this day of all days. The noise level in the room was more suitable for lip reading than conversational audibility.

It took only three seconds for this atmosphere of intense gaiety to turn radically and almost irrevocably sour. Frisco Pete (one of the Hell's Angels George had "invited"), elbows pumping him energetically through the crowd, covered the length of the room in for enormous strides. HE poised menacingly over the slight figures of John and Yoko.

"What the f$%* is goin' on in this place?!?!" he screamed at them. The room dropped into a clammy, itchy silence. No one moved.

Mavis' husband, Alan, gallantly interrupted Frisco Pete with a request for a little consideration for the situation. His efforts were rewarded with a single closed-fish punch, carefully measured by a man who knew full well the power of his own strength. The room darkened. Frisco Pete returned his attention to John Lennon.

"You got more f$--in' fof$%!in broads upstairs tell me I've gotta wait until 7:00 just like everybody else! There's a forty-three pound turkey in that kitchen and I want some of it now!!!"

John Lennon, at this moment in his life a squeamish vegetarian, looked up at the frightening figure of Frisco Pete in total bewilderment. He knew nothing of the release schedule on the Largest Turkey in Great Britain. The Press Officer turned to the House Hippie and told him to fetch Peter Brown without any further delay. With relief he found him outside in the hall talking to Ron Kass. "Peter, you'd better come inside right away" and the House Hippie pulled him by the arm, fearing the loss of precious seconds.

"I don't know where those f#%!in' heads of yours are but where I come from when we got food we feed people, not starve them!" Peter Brown glimpsed in two blinks what was happening. The House Hippie gulped and closed his eyes as Peter walked calmly up to the San Francisco chapter of the Hell's Angels Motorcycle Club. Tapping him lightly on the shoulder, Peter Brown moved between John Lennon and Frisco Pete just as a fresh flow of verbal punches was about to begin. An audible intake of breaths circled the room.
"Now listen, Pete, we have every intention of feeding you and I apologize for the delay but I was hoping you could appreciate that the kitchen staff have been working since 9:00 and they've been under considerable pressure. We're waiting for the caterers to finish laying the tables and it shouldn't take more than another ten minutes and then we can all go downstairs and gorge ourselves to death but please, I beg you, be patient."

That did it! An up-front answer to an up-front question. Frisco Pete shook his head once, turned and left the room. In the course of 60 seconds Peter Brown had become the hero of the Battle for the Largest Turkey in Great Britain.

When the door to Neil's office was thrown open ten minutes later everyone could see it was going to be a sumptuous feast. The massive catering tables buckling to support food and drink ran the length of three walls Frisco Pete was the firs tot reach the main table where the Largest Turkey in Great Britain sat. Before the waiter had a chance to work up his best carving voice to say, "And would you like white or dark meat, sir?" Pete grabbed a firm hold on the poor dead bird's body and without any further ceremony ripped the turkey's left leg from its torso. IT easily weighed four pounds and more closely resembled a caveman's hunting club than a turkey leg. The hordes were right behind him in full force. By midnight there was nothing left but the washing up. It was a very fine party, just as the Press Officer said it would be.