George in London Summer of 1972 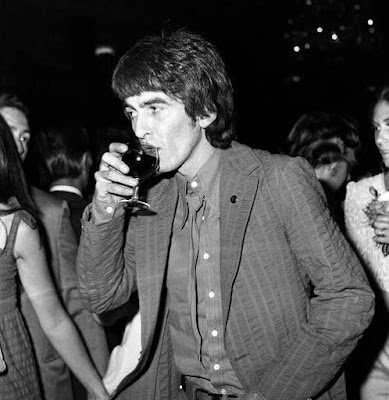 I am sure that you all have been wondering to yourself what exactly was George Harrison doing 50 years ago.  Well -- do I have a treat for you because I have found a diary written by a fan that was in London in late July/early August of 1972 and shared what was happening with George during that time.

July 25th - Saw Pattie today at the office, as well as Alf, Mal (He’s got new glasses!  Wire ones!), and Neil.  We saw Ringo come out again as well.  Joanne went over to Pattie when she came out and spoke with her for a while – her hair’s cut differently now and she’s got bangs.  She waved at all of us as she passed by in her red car!

July 26th – Today was the premiere of the Bangla Desh film – Angela (an Italian girl) gave me an extra ticket she had, so I got in.  Joanne (who got in thru Alf) and I sat downstairs for a while then decided to try to make it upstairs. That was for “reserved” seats and anybody who was anyone was up there.  We managed to get up there and sat right behind Nilsson (who was making out with some chick) and to our right was Bolin – a few seats away.  George never showed up.

July 29th – Today I went with Joanne to go to Chelsea and visit the antique market Pattie recommended to us (AntiQuarius).

August 1st – It’s raining at Apple – we chatted with Alf.  Saw Ringo go in.  Found out George just started recording – saw him go in at 7pm.  “I’m late – good evening!”  He came out at 1:05am (he always made late nights) – smiled – and just waited like he usually does! (Klaus and Nilsson left with him).  Paul Mosian (a man who works for Klein at the NY office) showed up and I directed him down to the studio.  Lindsay – the night guard at the studio, sent cups of coffee up for us – god it was cold!

August 3rd – Today my friend from California gave George a shirt that read “I Dig Love” – white lettering, blue background.  He smiled and said thank you.  Pattie went in at 10:20pm and came out about half hour later.  This was a long night and cold!  We had blankets and slept on the steps huddled against each other – singing sometimes to keep awake and normal.  A policeman greeted us midway through the night and chatted.  Anyhow there was always about six of us – no more – no less – and we sat huddled on the steps.  3 of the Scruffs and 3 of us.  When he came out it was light out (we must’ve looked a sight!) and he thanked the Scruffs for the present they’d given him.  Then my friend said “how’s it going?” to which George said, “now I know why Phil Spector is crazy.”  My friend, “why?”  George:  “Well you have to listen to the same thing over and over again and it makes you go crazy!”  Anyhow – you know how slow George is – talking about that took about six minutes (one must also include the one-minute state breaks he takes while talking).  As he drove past us, he waved – we waited for the trail and got home at 6am.

August 4th – There were a lot of people at the studio today.  George went in and smiled while saying “freak show!”  He came out and said “good morning” to the 5 of us at 4:40.  My friend said “is it getting any better?” to which George said, “It always sounds better early in the evening and then it sounds worse as the night goes on.”  He strapped himself into this blue BMW before starting the car – then he went past us, and waved goodbye as he usually did.  Our friend in the studio arranged for us to have a little tour of the Studio – as soon as the Scruffs left and all the musicians.  So at 5am we were playing “Here There and Everywhere” on the control room piano.  He showed us all over and explained everything – really interesting.  I noticed that all of George’s instruments still had the tags on the Park Lane Hotel and the Queen Elizabeth II.

August 5th – I think we slept till around noon today.  It was Saturday but George even worked on those!  When he came in today (6pm) we all sort of made a pathway for him – you could understand better if you could see what I’m talking about, but imagine 8-10 people in a cluster then they see George and immediately form a path and diverge on both sides – well that’s what we did and noticed and was trying to hold his laughter in while saying “hello!” as he went in.  One of the Scruffs gave a big whistle and everybody just about cracked up.  At 7pm he came out (which was unusual) and walked to Piccadilly to go to the movies with Phillip – a technician.  He came back at 8:45 and some Spanish girls were there.  As he came in, one went to go over to him but tripped on some wiring near the construction there, to which George noticed and said, “you’d better watch yourself!”  She got herself untangled and went over to him – stated her name and said she was from Spain.  Then she planted a kiss on his cheek to which George seemed quite delighted, and he said “oh – I’ve never met anybody from Spain!”  At 4:40am George came out, he gave us all long individual stares and said “goodnight.”  We had sent down some wine to them with a card that read “Here’s something to make it sound good all night long.”  Nilsson came out with the bottle, offered us some, and chatted.  He was really nice and thought it was great that we waited so patiently for George. He was a real nice down-to-earth human being.  I liked him a lot.

August 9th - George has stopped recording for a while.

August 11th – George expected for lunch at Apple but never showed up.

August 13th-- George is in the studio again.  My 2 friends unexpectedly walked by and saw him, Nilsson invited them in to listen to the tapes in the studio afterwards!  After that night he stopped using the studio again.  He suddenly left for Portugal alone.  Nobody at Apple knew anything.  Pattie remarked that she hadn’t heard from him – “Oh I hope he’s alright!”  He doesn’t speak a word of French or Portuguese!  By the way, he drove down to Portugal, and in Spain he met up with Gary Wright.