Wings in Australia.  I wish I had had more tickets, but I only had two for the two Melbourne concerts.   The other cities are hundreds of miles away and I wasn’t able to visit them.

Wings arrived at our airport Tullamarine.  I saw the cars and waited until the group arrived.  When they were there, I took pictures madly but none of Paul!  Five shielas were jumping up and down in Paul’s open window wanting autographs, so I only saw him for a split second.  Linda was laughing at my homemade T-shirt though and I knew she would remember me again if only the T-shirt.   Some of my friends were standing on the other side of the car and took pics of Paul.  Only 10 or 12 fans were there, but Paul said, “We have to go now” before I could do anything (smile, wave, press a shutter, etc.).  The car started to roll and I had to let go. 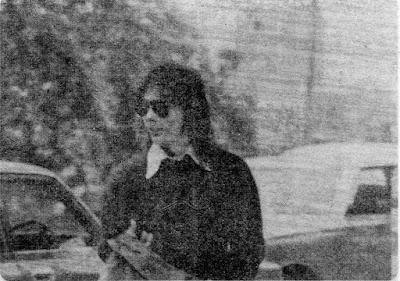 I was up early the next day to park myself in the queue outside the Sidney Myer Music Bowl.  Around the back, 3 T.V. trucks were setting up.  One guy was very friendly and let me see their equipment.  IT was very impressive, to say the least!  He told me Wings would arrive for the soundcheck at 1 o’clock.  I was used to waiting a whole day due to the day before at Tullamarine, so the wait was only a hardship due to the burning Australian sun beating mercilessly down on the gathered fans.  First ten fans but as the hours passed it reached 50-100 fans.

The brass-section arrived at one o’clock with Joe (English).  He walked right past me and I was the only person to recognize him it seemed!  I took a bad photo just for posterity.  Later he strolled back up the driveway and talked to my Armstrong Studios friend, on the other grass-island from me.  He walked back down.  We could hear one of the security guys' walkie-talkie and Paul would be one hour late and arrive at two.

At ten past two Jimmy arrived with a lady a d a 6-7-year-old girl.  I got one picture of Jimmy looking right at me and yet another one that’s decent.   Paul arrived at 3.10pm (2 hours and 10 minutes late).  Buy this time there were too many fans around the back of the bowl.  Paul was sitting on my side and Linda came out after him.  I shot out from behind the rope to give Paul a present (which had always been my dream).  Some girls were screaming and I had to repeat myself to be heard.  “A present,” I said simply.  Paul was surprised, “Thanks!” and walked toward a lady and talked to her.  “Linda, Linda, a present,” I called.  She looked ever so delighted and I am sure it must have been her first Aussie present by her expression.  I know British fans give them flowers so to be different I gave her some expensive nail polish.   I was knocked out by her delighted expression!  I could tell she remembered me in my grubby little Wings T-shirt and London badge (sent to me by an American).  It was as if her face said “So this is what that kid was buzzing around for at the airport.”  She said no words but had an expression that said it all.  They both talked to this lady and I took a good pic of them both looking back at me.  A girl in a light blue t-shirt is also in the photograph and with her mouth open in mid-question.  I was later to learn that the lady was from the television news and that it was filmed.  The film showed just how little time I had and the girl in the blue t-shirt was the one who shook Paul’s left hand.  She had to ask twice because he turned around to wave to everyone.  One of my photographs had the door’s window in the way which reflected one of the “heavies” instead of photographing the gorgeous Paul who looked so much better one foot away from me than on TV. I was so disappointed about that shot!

In the concert, the bowl had only a limited number of seats and I was so unfortunate as to have a ticket for the lawn section.  But I picked my way through people and ended on the very front of the lawn and in the centre to look at the stage.

The heavies ordered all fans with lawn tickets to get out of their queues and go to the centre-queue -- one hour before the gates opened.  What lunacy!  14,000 fans all running to the one queue!  Just so that seat ticket owners (a very small number, maybe 1,000 but no more than that) could enter in style.  It was just a struggle to breathe, so there was no reason to worry about originally having 20 people ahead of you changed to 2,000!  One girl not owning a ticket fell out of a tree and was put in an ambulance.  The bowl was crowded when I eventually got in, but I managed to squeeze myself to the choice lawn spot.  It wouldn’t have been possible if the concert hadn’t been filmed because a camera platform was my saviour. 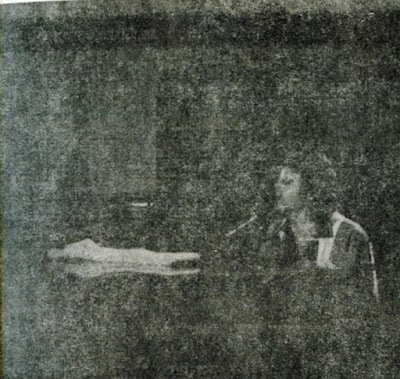 We weren’t allowed to stand up or dance and I was so upset by that.  I sneaked down the right-hand aisle and tried to shout up to Linda to tell the blue meanies (the security) to back off.  She couldn’t hear me as far as I could make out but she could see me.  I was almost crying as she smiled down at me especially as I was sheering woefully from between iron bars as if I was the Band on the Run.  Blue Meanies told me to go back to my section or they’d kick me out, so I crawled back to my camera spot.  My roll of film had run out and I didn’t take the camera to the front what a sin.  I left near the end of Band On the Run because I wanted to see them leave.  I could hear the two encores and I saw all but Paul from the drive-way as they walked between party and stage.  Paul was doing a TV interview.  But the Blue Meanies were being very offensive.  Each time they came up the drive, we would whisper “here come the Blue Meanies” and we would jump behind the rope and try not to get into a fight.

Because I’m only 14 and my father had been waiting 3 hours to take me home, I had to leave at midnight.

The next day, Friday, I was exhausted but still arrived at the bowl early in the morning – especially as I had to be quick before public transport went into their strike.  I wasn’t going to be stuck 10 miles out of town!

When I got to the bowl one guy was ahead of me in the second queue (three entrances) and I went and got two rolls of film developed at a special place while I waited 3 hours for the work to be completed.  Without transportation I had to wait in the shop for the whole time.  I walked back to the bowl and had no idea of the time.  I found the guy in front of me had disappeared so I was FIRST in the queue!!!  I went around the back and met a girl from interstate who was attending her 6th Aussie concert.  She said she saw me the day before.  I wish we had met before because she was very clued up and really had her wits about her.  She was wearing Paul’s guitar strings given by a roadies – Aussie bodyguard actually. 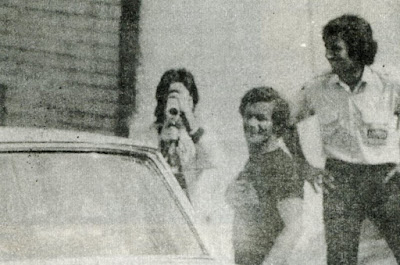 The cars drove right down to the bottom of the drive.  Paul got out of the other side this time and had his own movie camera.  I know both Paul and Linda waved to my friend who was a long way behind me (I had sneaked more than that halfway down the drive with a heavie in front of me).  Paul was cute with a camera, but I am not sure he filmed me because I was out of place and not on the two sides of the walls (The drive went into a hollow).  There were only about 20 fans this time which was good.  I shouted to Linda, “Good shot of you Linda!”

It was fun to spend the sunny afternoon listening to Wings doodle musically but we couldn’t see a thing because the bowl was fenced and covered with blankets – including blankets on the gates!  Occasionally the wind would blow a blanket and we could see Paul playing some very catchy rhythms on the drums but later let Joe bang on them.

Joe was great on those drums in concert, and Jimmy played one or two good guitar bits. I took some photos from near the front in an aisle but ran out of film again.  I couldn’t get their attention either.  We were able to dance a whole lot better the 2nd night and we all filled the aisles.  I squeezed myself up to the front. 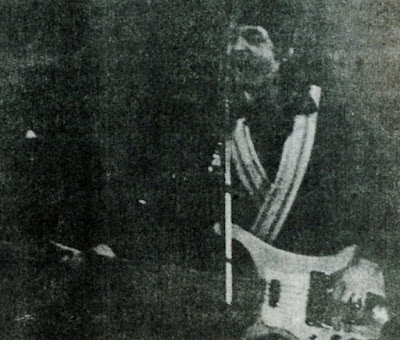 There was the stage then 10’ drop, a fence and then the seats.  Linda threw an apple during “Go Now” and the guy next to me caught it.  He had to put it down his pants to stop everyone from killing him.   I missed everything the group threw, but I got a red and yellow balloon, a red and yellow candle, a Wings packet of matches, a roadie thrown a cap of Paul’s from top of his piano, a flower and someone’s Polaroid throw-away part.   I wanted one of the three sweaty towels
but missed.  Joe threw three pairs of drum-sticks too.

Cards with pictures were thrown, but I missed.  I couldn’t afford any of the Paul scarves on sale.

I had bruises all over and could hardly walk afterwards but it was worth it.  I loved being in the front, legs stuck in the railing and all!