The Lost Weekend: A Love Story -- a movie review

This past weekend I watched the new documentary "The Lost Weekend:  A Love Story."   This film told the story of May Pang and her 18-month relationship with John Lennon in 1973 & 1974.

This documentary was extremely well made.   It frequently used line-drawing animation to get the story told and I found it to be extremely effective.   There were some very good interviews with not just May Pang herself but also with Julian, Chris O'Dell, and several others that were there.    The story was told not just through these modern-day interviews but with archive footage from the 70s and archive talk show footage of May from the 1980s.     The variety of interviews really helped keep the story moving. 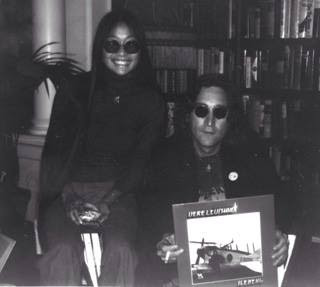 My absolute favorite part was all of the previously unseen photographs and home movie footage in the documentary.    Just when you think that the majority of "Lost Weekend" photos have been seen (espeically thanks to May's Instamatic Karma book) - this film is released and there are so many more!  There is some home movie footage that belonged to Julian that show John, May and Jules on a boat and swimming that is just precious.

If you have read May's book Loving John then you know everything that is told in this film.   There is nothing new or unknown that is told.    However, May's book was written in the 1980s and not very many modern John fans have read it, so the stories very well could be new for some.   I actually found it refreshing that May's story has not changed over the years.    Often when someone re-tells their story, things get embleshed or changed around, but this is not the case when it came to May.

Of course the film is May's story.   It is not John's and it is not Yoko's.  This is May's memories and her point of view.   Some might find it all to be a bit controversal because May's version of the story is not the same as Yoko's or even as John's.     May and the Lost Weekend often gets glossed over or removed when learning about John's life, so it is good for May to continue to tell what happened from her point of view because the official Lennon estate will not tell it.

My only complaint would be the the placement of some of the photos where not historically correct.  For example, in talking about John and Ringo in 1974, a photo of them at the Copa Cabana Club in 1976 was shown.   Little things that like happened from time to time, but that is just me being my usual nit-picky self about dates of photographs and isn't a reason to not watch the film or anything.

I do not believe that you are watch the movie anymore at the moment, but it should be available in the near future to purchase in some form.    Even if you have read the book, it is worth watch The Lost Weekend:  A Love Story because of the interviews and the rare photos.