The Beatles in Detroit 1966 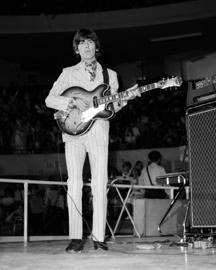 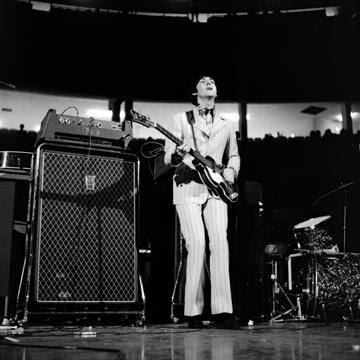 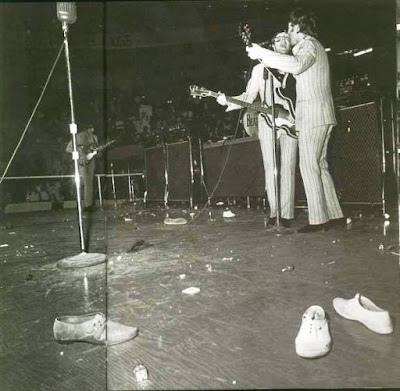 The Beatles in Detroit 1966

It’s been nine years since that fantastic day of August 13, 1966. My next door neighbor was Robin Seymour who was a disc jockey for CKLW radio station.  Now Robin had told me if there was any concert I wanted to see and anybody I wanted to meet, to ask him and he’d see what he could do.  I knew then that this was my chance.  After all, wasn’t it just two years ago that his daughter Jenny had gone backstage and had her picture taken on Paul’s lap?

I asked Robin if it would be possible if he could get me tickets to the concert.  The day Robin got the tickets he explained why he had gotten three (I had asked for two).  He planned on going with us.  I couldn’t believe it.  That would mean that Kim Stevens and I would be going backstage with Robin.  At the age of 13, I thought that I was going to die of a heart attack.  Then it happened two days before the concert.  Robin broke his leg at the Roostertail where he was MCing a show.  That dashed our hopes of going backstage and meeting the Fab Four.   Kim and I hadn’t seen the tickets and didn’t know where we’d be sitting.  And we also had an extra ticket.

August 13, 1966.  WE had decided to take my brother Mike along to the concert. Robin had given us the tickets that morning.  Kim’s dad took us to the Olympia stadium and we were on our way.  We got there early and we couldn’t believe the crowds.  It was fantastic!

As soon as we got out of the car a Police Wagon was coming up the street on McGraw with about a dozen girls chasing it.  Kim and I dashed off leaving my brother behind.  WE just knew the Beatles were in it.  Well, we were wrong.  They opened the doors and four cops were sitting there laughing at all of us.

Next Kim and I proceeded to buy our Beatle pins and banners.  I bought a pin that said “I love Paul” and Kim bought one for John.  We sat on the curb waiting for The Beatles to arrive.  And then suddenly, it happened.  A police escort was coming up McGraw and a black limo was right behind them and also a bus.

The crowd all moved to where they thought they could get a better look.  The noise was deafening.  Kim, Mike and I stayed right where we were.  After all, they had to pass right by us.  I was about to get my first look at a live Beatle.

The limo rolled by us and in it were Brian and George.  I stood there not believing my eyes.  He was so beautiful.  He smiled and waved to us and Kim and I got spastic.  Now, John, Paul, and Ringo were not in the limo so they had to be on the bus.  Kim and I stared at that bus trying to make out who the people were.  We were frantic.  AS the back of the bus went by, Kim and I at the same time spotted the other three.  I then pointed to the back of the bus and started screaming that they were there.  Ringo doubled his fist and me and Paul smiled and waved and John was looking off in the distance.

After all the excitement we then marched up to Olympia’s doors to be let in.  We glanced at the tickets and I saw that they said ground level, so we found the nearest usher and asked him to guide us to our seats.  (We had never been to a concert before and it was truly an experience).

The usher looked at our tickets and smiled.  He then took us to our seats.  My God, they were front row tickets!

We were positioned right in front of Paul’s microphone.  Kim and I climbed all over each other.  Mike was getting embarrassed.  He hadn’t wanted to come anyway.  The concert started.

We sat very still while the other acts were on.  We vowed that we would not scream and carry on when the guys came on.  We then had to wait during an intermission.  Everybody was getting tense.  You could feel it in the air.  Then the lights started to dim and the excitement increased.  Four figures ran up on the stage, grabbed guitars and the lights flashed on.

There they were!! A scout of screams filled the air.  Kim and I were on top of our chairs in an instant screaming our hearts out (so much for our vows).  Their suits were beautiful.  They had on grey bell-bottomed suits with pink pinstripes running through them and pink shirts to match.

Things were being thrown from everywhere:  rings, stuffed animals, everything.  I don’t remember much of the beginning.  I was trying to get my camera to work but after the first song, I gave up and threw the camera down.  Paul noticed and laughed.  Then with sympatric eyes said, “What’s wrong love?”  I died.  I simply died.  Paul had noticed me.  He actually talked to me.

Paul then announced that they were going to attempt a song.  I’ll use his own words.  He said, “The next song we’ll try to do is a song we usually have an orchestra to back us, but today we only have this cheap band, so bear with us.”  The song was “Yesterday.”  It had gotten a little quieter for this particular song, but not me!

In the middle of the song  I started jumping up and down on my chair and at the top of my voice screaming out “Paul!”  I also pointed to my “I love Paul” button as my voice screamed.  He looked down, saw what I was pointing to and smiled the biggest smile I’ve ever seen, and nodded his head.  John looked towards our group and shouted “shurrup!” only to get more screams.  Ringo was then featured singing “I wanna be your man”.  My brother in the meantime was throwing jelly beans at them.  He hit George on the arm with one and one stuck to his guitar.  George brushed them off and gave my little brother dirty looks.

The last song was “Long Tall Sally.”  By this time, I was crying, slumped in my chair exhausted.

They then put down their instruments and the chase began.  I had always dreamed of something like this- me chasing the Beatles.  The crowd was blocked by the police.  They had formed a line to let The Beatles pass through.  We must have been close to the dressing room.  I was pressed up against a policeman.  The Beatles were coming through.  I felt sorry for the cops for now I knew how they felt.  I remember as the Beatles came through one of them (I thought it was John but Mike said it was Paul) said, “Christ, let’s keep moving.”

Email ThisBlogThis!Share to TwitterShare to FacebookShare to Pinterest
Labels: 1966 tour, Beatles concert, concert memory, Detroit, fan memory, The Beatles, With a little help from my friends