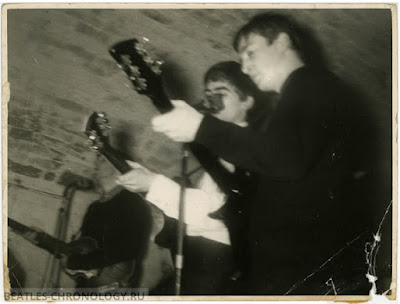 The longest-standing Beatles fans in the world are an elite of Liverpool girls who followed them on their first gigs around the local jive hall circuit.  They sent them letters (and got replies!) during their long stays in Hamburg and wept as success snatched “the boys” away forever.  Most of these original fans are now in their late twenties and early thirties, but they’ve remained loyal to the group who once chatted to them between sets, leaning against the Cavern coffee counter.  One such devotee is Pat Dawson, now a working mum but then schoolgirl Pat Hodgetts.  She recalls clearly the first time she saw The Beatles.

“A girl friend dragged me down to a lunchtime session at the Cavern to have a look at this funny group.  We went basically to have a laugh – and there they were, all black leather and greasy.  They still had their hair like Teds, that was before John and Paul went on holiday to Paris and had theirs cut flat.  George’s was still greasy for some time after that.”

As their local following on Merseyside mushroomed – a year or more before their first single – a sort of class structure emerged between the original fans like Pat who were on first-name terms with the group and the newcomers who swelled the ranks at gigs but tended to gawk rather than talk to The Beatles.

“They (The Beatles) would come into the Cavern, go down the bandroom, then come back to the coffee bar and chat to us all.  I think the main thing was there was a hierarchy of people who’d been watching them a lot time, and they were quite matey with us.  They used to pull birds from this group, but when the newer fans arrived they were already beginning to get “distanced”.  The older fans tended to like them for their music, and as fellas in the personal sense, whereas the newer ones liked them because they were Beatles.  This was long before they made records or anything, but they were already a big bult thing in Liverpool.  It wasn’t like seeing people who were stars, you still saw them as a bunch of lads you might get off with.”

Pat accumulated a vast collection of early Beatles’ memorabilia much of it consisting of family snaps “bootlegged” by the fans.   “There was a fantastic trade in snapshots – as opposed to publicity photos of the group – that the girls themselves gook, or make got off a friend of a friend of George’s cousin or something like that.  I’ve still got one of George sitting on the dustbin in his backyard.  I used to plague the life out of Mike McCartney for photos.

What a lot of us would do, if we couldn’t afford to travel to a gig AND pay admission, would be to go anyway just to watch them arriving and leaving, and listen through a window or stage door.  When they arrived we’d act as if we just happened to be there, nothing to do with The Beatles being on.”

The all-night queuing outside the Cavern, and the week-long queue for one of The Beatles’ welcome home from Hamburg gigs, have become legendary.

“There was a night when five or six of us huddled in the Cavern doorway to get a good seat for the show the next night.  IT was really dark in Mathew Street, and the police used to check every hour or so to make sure we were okay.   Anyway, this car was creeping up the street, we couldn’t see it wasn’t police, and when it got alongside a voice said “What the hell are you all doing here?”  It was Ringo and Paul!  We told them we were waiting to see them and with a “Y’must be bloody mad,” they were off into the night.  Half an hour later they were back with hot pies and tea for us all from the all-night stall at the Pierhead.”

Such was the premium on a seat in the front row – although gradually the “old” fans like Polythene Pat as she was then known (Polythene Pam?  Who knows?) had to compete with a growing following of new faces.

“The lads used to play the Death March when people fainted in the front row.  Mind you, that was when they got a bit famous and there were new people in the front row they didn’t recognize.   I remember before their final Hamburg trip there was a feeling at the lunchtime session that it was one of the last times we’d see them like this.  ‘Love me do’ had been a minor hit, and there was a certainty in the air that they were about to happen and John sang ‘To Know Him is to Love Him.’  And when he finished the group could feel sadness in the audience.  Instead of fooling around into the next number like usual, they were fumbling and looking at each other.  Everyone was just numbed.”

“The night Bob Wooler announced as they were going onstage that ‘Please Please Me’ had reached number one, it was awful because the reaction was the opposite to what they expected.  Everyone was stunned.  That was the end of it as far as we were concerned.