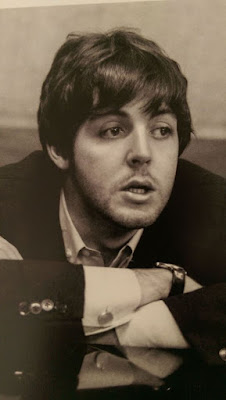 This interview was conduced with Paul McCartney and Photoplay magazine.   I am not convinced that it is a REAL interview.   Some of the answers just seem off to me.   The interview took place in Austria while filming Help! in 1965.   Paul was waiting at a phone booth to receive a phone call from Jane Asher in London.   As always -- I am presenting what I have found and you can determine for yourself if Paul really gave these answers or not.

Paul:  Do journalists swear?  Why shouldn’t Beatles swear?  Why should we be better than anybody else?  Not long ago a chap form a London paper wrote a whole page solely about our swearing I remember him coming and asking for an interview. Well, we had no time to give him an interview so he sat a few yards from our table and sulked, boiling with rage.  That article was the result.  Isn’t that ridiculous?  I could just as well listen to what that chap says to him newspaper friends and then do a “scandal report” on “Journalists Swear Like Madmen!”

PP: The Beatles are no angels, then?

Paul:  We never tried to give this impression.  Of course, we aren’t saints.  We curse when we are angry, play poker when we are on the long train journey and want to kill time, and we love to drink when we feel like it.  The fact that we are popular does not make us inhuman – or does it?  We don’t hide anything.

PP:  Some people say you are rude.

Paul:  I know that, too.  There are times when a girl comes to us and wants an autograph.  When we say “no” the girl begins to cry and reporters write “Beatles Offend Little Girls,” “Beatles Are Rude,” and things like that.  Well everyone knows that we are under constant danger of being mobbed.  When we are working, our director sometimes asks us not to give autographs.  It can be dangers – like lighting a match in a gasoline station.  You can give one autograph and then you are mobbed.  Your clothes are torn, you get beaten up and end up in a hospital.  We want to stay outside hospitals so we have to be careful.  Sometimes that is interpreted as rude.  We can’t help it.  It is a pity.

PP:  How do you react to the photographers and press people?

Paul:  They are chasers, too.  We hate to be photographed while we eat and drink or while we are trying to lead some kind of private life.  Of course, there are some who take pictures even against our wishes We fight them.  Isn’t that normal?

PP: Do you love your fans?

Paul:  Of course we love them.  But sometimes we want to be left alone.  Recently I spent a wonderful vacation in Tunisia.  Nobody recognized me.  Days went by while I enjoyed the sea and the company of my girlfriend.  Then a little boy, about nine years old, came up to me and said firmly, “You are a Beatle!”  I was startled but I replied in German, “No, me Deutsche student! No Beatle!”   He looked at me for a few seconds and then turned around and vanished.  After a while, he came back to me with a record under his arm.  It was one of our records with our photographs on the cover.  The boy, who was almost smaller than the record, said, “No ‘Deutsche student.’  Beatle are you!  You admit now?”   Of course, I then had to admit it and gave him an autograph.

PP:  When in London can you meet your friends without being mobbed?

Paul:  Sometimes, at a club called the Adlib, we can spend an evening without being disturbed by the press or fans.  It’s a great place.  You can get drunk there without having your picture turn up in the newspapers the following day.

PP:  Some people are saying that The Beatles are too busy now to enjoy life.

Paul: This is nonsense.  We used to play for a few pounds a day.  Now we get fat checks.  Before, we lived in small, uncomfortable rooms, hadn’t even enough dough to buy a cup of tea.  Now we live life and we enjoy it.  We have a great time.  It is great to have money.  Of course we are happy!  And not only because of the money. There are other advantages.

Paul:  Yes.  It happened at the beginning of our career.  We were replaying at the Keiserkeller, a little club in Hamburg, and we were paid lousy wages.  So we looked around to find another spot and decided to try a club called the Top Ten.  The owner of the Keiserkeller went to the police and said we tried to burn down the rotten place!  One morning, the police came with a van and collected us all.  I was very sleepy and slept on our way to jail.  When we were locked up I remember saying to the policeman, “Please get me cushions.  That is a damned hard bed you have here.”     Tony Sheridan, the only one of us who spoke German, told me to shut up.  Tony was our vocalists.   He asked the chief about the charges.  We had no idea.   We lived an exciting life in Hamburg in spite of the lousy room, dirty clothes, gloomy places.  We used to sing at nights and dance in the streets dressed up in strange clothes.  So we thought the charge would be that.

A few days before we had gone to a small restaurant, Manfred’s and broken a lamp.  A guy blocked the way out, saying, “Nobody leaves until you pay for the lamp.”  We knew that guy was series and we began to collect money.  It wasn’t nearly enough but Astrid Kirchner, a German girl friend, bailed us out!  But since we had paid for the lamp, we knew it had to be something else.  Maybe because we marked through the streets in German uniforms, or because John walked around with a toilet seat around his neck, or because somebody spat through windows…

It was not.  We were charged with setting fire to the club.  We were amazed.  We remembered sometimes stubbing out our cigarettes on the wall in the club but that all.  The charge was completely fabricated.

Luckily, the German police were understanding.  They investigated the matter and after a few hours we were told to go home to Liverpool.  George had no work permit and was too young to get one, so we had to leave Tony Sheridan behind us to clear things up with the authorities.  We were able to return after a while and work there again.  The Keiserkeller was closed down soon afterwards.  That was the truth about our jail episode.

PP:  It is alleged that you have illegitimate children.  Two girls have accused you of being the father of their children.  One is 18 year old Anita Cohran, who claims that your manager, Brian Epstein, gave her money to keep her mouth shut.  The other is a girl from Hamburg, Erika Wehlers, who has a 2 year old child, Bettina.  Erika has told her story to a news agency and they have sent he to London.  She claims she got a letter from you at Christmas asking about the child.  When I met her in Hamburg a few months ago, she said she could not prove her case because, “My boyfriend destroyed the letter in an outburst of jealousy.”

Paul:  Well, I have never met her nor have I any children.  Look, some of our fans sometimes have certain fantasies about us.  Let me give you an example.  While we were staying in the USA, a girl came into my room and said, “Hello, my name is Jill.”   I asked her, “Do we know each other?”  She replied, “Yes we do.  I love you and you love me.  We shall have to marry.”  I was certain I had never seen her before.  I asked, “Who introduced us and when?”

“It was God Himself who did it,” she replied and added, “If you don’t love me now, can’t you at least try to learn to love me?  I know you can if you try.”

PP:  Is it true you don’t want to get married?

Paul:  Wrong!  Why do you think I sit here and wait to talk to Jane in London?  I want to marry.  I really do.  It is just a matter of time.  At the moment I am busy working on the film but as soon as it is finished, I shall get married.

PP:  When will it be finished?

Paul:  In a few weeks’ time.  We have to do a few scenes in London.

PP:  Is making a movie fun for you?

Paul:  Sometimes it is fun, sometimes it is just hard work.  In the Bahamas it was fun at first but then we almost died of terror.  We were standing in the sea up to our necks in water. It mad a nice picture for the newspapers.  Later we heard that at the same time we were posing a shark had entered the bay.  Fortunately, he wasn’t interested in us and went away, but we have been shaking ever since.  The Beatles are no heroes.

PP:  What else happened there?

Paul:  Well the Governor gave a reception and we met his wife, Lady Gray.  She looked straight at me and said, “You are Ringo, aren’t you?”  Well, I could understand if the good lady had mistaken me for John or perhaps George, but how on earth she could have thought I was Ringo, with his rings, hair and big nose, beats me.

Paul:  We all dropped on the floor, as if we were dead  Then we got up and left the reception screaming.  But later on we came back and apologized.  I wonder if she would recognize me now.

PP:  What is this movie about?

Paul:  I can’t tell you.  We want to keep it a secret until the picture is finished.

At that moment the telephone call came through and Jane Asher was on the other end of the line.  Paul jumped up and vanished into the telephone booth.