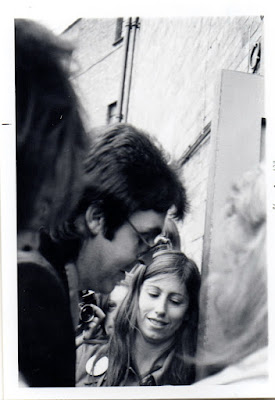 With a Little Help From My Friends

The house lights go down.  The opening strains of “Venus and Mars” come across the expectant audience – slightly off there, Linda, but it doesn’t matter, the curtain’s rising and we’ll be seeing Macca any second.  Suddenly there he is!  He looks really incredible dressed in black trousers kimono style jacket and red t-shirt.  I sit with eyes glued on his face – and from five rows from the back that’s no mean feat!  From “Venus and Mars” the band breaks into “Rock Show” followed by “Jet”- the audience is really rocking with them.   Someone calls out “What about John Lennon?” and one of the band (I couldn’t make out which one, unfortunately) replies “What about him?”  Paul introduces Denny as singing the next number and then realizes that it’s “Let Me Roll It” and Denny’s not singing lead until the next one, “Spirits of Ancient Egypt.”  Those two songs over in the right order and sung by the right people.  Paul switches to piano and plays the introduction to “Little Woman Love.”  Denny does something wrong and Paul stops playing and says, “No, no, I’m not having that” rather crossly.   My heart is in my mouth as I think they’re going to have a row – the tension mounts.  Paul plays the intro again and the bad patch passes as they swing into “Little Woman Love / C Moon” medley with no further hitches.  I’ve no idea what Denny did wrong but it must have been something drastic for Paul to react the way he did.  Then it’s that lovely song “Maybe I’m Amazed” which he sings beautifully followed by “Lady Madonna” – the applause gets really loud for this one.  Unfortunately, Linda spoils it by singing flat but who cares – it’s so great to see Paul performing a Beatle song.  As if to confirm that he’s proud of his past he then does “The Long and Winding Road” – swoon!  Jimmy is introduced as singing the next number “Medicine Jar” which he does really well proving what a good voice he’s got and how well he can play that guitar.  With Paul out of the spotlight, I noticed for the first time that Joe is a really good drummer.

Next, there’s a lot of moving around the stage as they line up the chairs for the acoustic session -
Picasso’s Last Words (Drink to Me)”, “Richard Cory” sung by Denny almost as well as the version by Simon and Garfunkel.  “Bluebird” where Paul asks if we know what a rhythm box is and says “Bine of you do!”  The fourth song is “I’ve Just Seen a Face” which Paul describes as being “skiffley.”   As if that song wasn’t enough, Paul is left alone on stage to sing “Blackbird” and “Yesterday.”  It’s too much.  You barely notice what a fantastic guitarist he is, he looks so lovely just sitting there singing.

The band comes back and Paul dedicates “You Gave Me the Answer” to Jack Buchanan as he sits and the piano ready to sing.  Linda yells “What about Fred?” referring to the previous concert where it was dedicated to Fred Astaire.  (Paul changed it because the audience in the concert before that hadn’t heard of Jack Buchanan).  This time he obviously expects us to know of Jack as he asks us if we’ve all heard of him and on receiving the reply “yes” breaks into the song.  Denny introduces “Magneto and Titanium Man” as friends of his and they sing the song against a back-projection showing the three characters which is very effective.  Denny then does that old standby, “Go Now” and the band performs “Live and Let Die” with flashing lights.  “Call Me Back Again” and “My Love” followed.  Somewhere in this sequence Paul gets mixed up with which instrument he’s meant to be playing.  There are so many instrument changes it’s a wonder they remember them at all – this time he straps on his guitar, takes it off, and heads for the piano.  Denny yells “I knew he’d do that.”  Another time Linda got up from the piano as Paul headed for it and they bumped into each other.  HE just moved her out of the way without appearing to say anything to her – in fact, he ignored her for most of the concert, the only other time they were together being when they provided the backing vocals for “Go Now.”  “Listen To What The Man Said” starts and we go down to the front to get a closer look.  Linda, who had been relatively unobtrusive until now (in fact she’s been so bored with the whole thing that she’s been forgetting to come in with the backing vocals several times), starts showing off.  She dances around and points at the audience (well, she only plays one-handed keyboards!) and generally looks ugh.  I turn my attention to Paul and stand transfixed as he announces the new song “Letting Go.”  He follows this with “Band on the Run” which is accompanied by a film showing the cover of the LP being photographed.  Then comes “Junior’s Farm” – my eyes never leave his face.  He looks so gorgeous that I’m now really taking in the music or the audience going wild around me.  I’m just standing there staring at him.  Suddenly my friend Kathy nudges me in the ribs and points at Denny and Linda who are over to the left of the stage right in front of us.  He pulls away from kissing her and runs his hands all up and down her back – ahem!  I’m shocked at how blatant they were – right in front of the audience where everyone can see and probably did, and there’s Paul singing his heart out on her right unaware of what’s going on.

The band leaves the stage and after minutes of applause and cheering, etc returns and do “Hi Hi Hi.”  Again they leave but the audience isn’t having it so back they come to do “Soilie” – how about releasing that one as a single, Paul?   The audience screams for more but that’s the end.  I’ve never known two hours to go so quickly.

I wish the same could be said for the next two hours.  We stood outside the stage door waiting and waiting and finally after two and a half hours he comes.  His sports car was parked right by the door and Kathy and I were standing on the nearside by the boot.  Paul came around to see Linda into the car when another car came past nearly knocking Kathy down.  Paul saw what was happening and raised his left arm shouting “Hold on a minute!”  The car safely passed, he saw Linda into the car and started to head for the boot to walk around to go to the driver’s seat.  Kathy grabbed him and kissed him on the neck and when she let go, I grabbed him and hugged him.  He didn’t seem to mind this treatment (fortunately!) and continued around the car.  I asked him for his autograph and he said, “Yes, love, come round to the other side.”  As I went to follow him, Kathy said, “Great show Paul!” and he turned and said “Thanks, love.”  A security guard tried to stop me from going round the other side of the car but I told him that Paul had said that I could and backed my words by shoving him out of the way!  By now I was right behind Paul and he had his back to me.  I got hold of his left shoulder and gently turn him round, holding out my autograph book.  I tried to put my pen into his right hand and when he finally held the pen in his left hand, he couldn’t get it to write.  There followed a ridiculous conversation about my pen Paul: “; this pen doesn’t work.  Does this pen work?”  Me: “you haven’t got it out,” repeated several times and I was talking about the pen nib!  He was a bit drunk; after the party but when he cottoned on to what I was saying he pressed the pen and I got his autograph at last!  He got into the car after I thanked him and he must have said something to Linda because she turned and smiled out the back window which of course I was peering in.  We ran down to the gates and waved as he drove off at high speed and then it was all over.  We were so high we left completely forgetting that Ringo was still at the party and if we’d waited, we might have met him too.  Still, I’d waited 12 years to meet Paul and I’d finally touched him, and all I could think of was that he couldn’t have been nicer.

Email ThisBlogThis!Share to TwitterShare to FacebookShare to Pinterest
Labels: 1975, concert memory, fan memory, Paul McCartney, With a little help from my friends