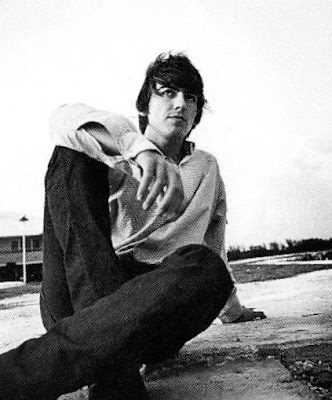 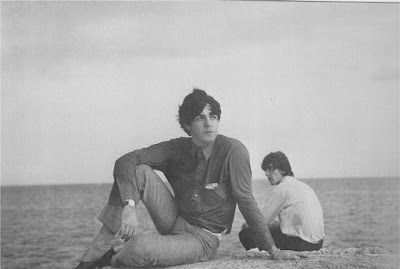 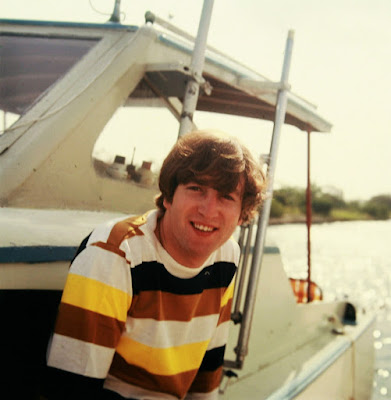 Key West Florida – So there I was at a poolside party with The Beatles early today.   It all started at about 1 a.m. here at the pool of the sleek Key Wester Motel, where I found myself the only American newspaperman touring with the famous four preliminary to their Cleveland visit next week.

The reason this poolside party started at 1 a.m. was that by then most all of the folks who worship at the Beatle shrine had gone home – with police encouragement.   So the Beatles emerged from whatever plush woodwork they had been hiding behind to have a swim.

George Harrison was first in the water.  He is the most avid swimmer of the quartet.  He jumped off the high board, executing a neat belly-whopper with a great splash.   His hair floated out behind him, for all the world like Dorothy Lamour.

Ringo Starr entered the pool next – cautiously, carefully, at the shallow end.  Music was coming from the public address system.  Ringo did the twist in the water.  But he swam not a stroke and for a good reason.  He can’t.

Paul McCartney was in and out of the pool, humming and singing in his famous falsetto that induces teenage squeals.

As for John Lennon, he swam not at all.  He came to the pool late, and sat alone at a table far from the rest of the party, his eyes hidden by dark glasses.  Then he wandered over to us.  He acknowledged his introduction to me with a firm handshake and the offer of an (American) cigarette.  I told him I was from Cleveland.

George meanwhile was talking with Jim Stagg, KYW radio disk jockey who has been on tour with the Beatles for several weeks.

Something in George’s voice caught John’s alert year.  “You sound as if you’ve got a cold, chum,” he said.  “Nope, nothing to worry about,” Beatle George declared.  “My nose is all bunged up from the swimming that’s all.”

Paul wandered by dressed after his swim in slacks and a blinding red sports shirt.  He had a real Beatle-size problem.  “I’ve forgotten my comb,” he announced.  No one had one, Paul used his fingers for a comb on his floppy mane.  It took some time.

Suddenly it started to rain.  We huddled under a patio umbrella.  Then we made a break for the bar, to carry on the party in there.  Unexpectedly, the bar patrons found themselves with an impromptu Beatle concert on their hands!   A rhythm combo was entertaining.  Three of them cheerfully gave up their instruments.  George and Paul grasped guitars.  Ringo slid in behind the drums.  Clarence (Frogman) Henry, a member of the Beatle entourage, did the singing.

The walls throbbed; the lemonade flowed.  The concert – mostly gutsy blues – went on until police suggested it was time for all good little Beatles to be in bed.  It was 4 a.m.

Last night about 750 youngsters assembled outside the Key Wester Motel after the Beatles had arrived here.  Police watched impassively and an alert ice cream vendor, his truck parked on the premises, made a small fortune, and still, the chant rolled on into the night.  “We want the Beatles; we want the Beatles.”

Ringo appeared briefly, waved to the ecstatic crowd, then went back into the Beatle suite.  That was it for the night.

Promptly at 9p.m. Larry Rodriguez of the Key West police force got on his bullhorn and told the youngster to go home.  They did.  “We have a 9p.m. curfew here for children under 16,” he said.  “We don’t usually enforce it this strictly.  But we figure it’s time the kids went home and got a good night’s sleep for school tomorrow. “

Cleveland Police Chief Richard Wagner will be interested in knowing that the Key West officer handled the situation – eight officers of the police force of this city of 35,000 plus three sheriff’s deputies from Monroe County.

“The youngsters have been pretty good about it,” he grinned.  “But my advice to the Cleveland policemen would be to stay alert.  You never know what these kids will do next. “

Early last evening for instance, while the fans waited for their British heroes to return from a brief sail on the ocean, a scratching, swinging, hair-pulling fight broke out among some girls.   It was Diane’s fault, one young indignant witness assured me.  “She said something nasty about Ringo, and Paula and Barbara would stand for THAT!”

The Beatles and their entourage flew into Key West from Canadian engagements, here to await the passage of Hurricane Dora and do get a breather from the hectic pace of their tour which is nearing an end.