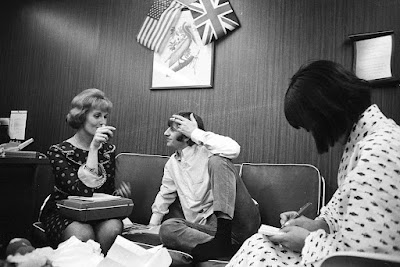 An Embarrassing Moment (no, make that four minutes) in the life of a Beatle (female) reporter

Scene I:  One upon a time in the land of Beatleism, we settled into our Chicago Hotel.  Since we had a little time to ourselves and my interviews were worked up for the next day, yours truly decided to take a little nap at 11:00PM.  When said reporter woke up, it was 3:00AM and since four hours of sleep were par for the course on Beatle tours, decided to take a nice soothing bath in the hopes of getting sleepy again. However, after the nice soothing bath, this “stupid” reporter reached into her purse for the key to unlock the suitcase that had all her underwear (like girdles – yes they wore them back then- and bras and sleeping gear) only to find no key.  Yep, you guessed it – she panicked and turned the purse upside down, scattering the contents left and right.   After a half-hour of searching for the key, hysteria set in.

Scene II:   Hold on – we still have not come to the final embarrassment and won’t in this scene either.  What to do?  Well, since road managers are usually the last to hit the sack, I crossed my fingers and called Malcolm Evans (who was definitely the nicest and most considerate road manager I’ve ever met).  Mal told me to hang on and would go down to the desk of the hotel to pick up their luggage skeleton keys (that was a new one on me too).  I got dressed just in time to answer the door.  Mal told me that the manager of the hotel had gone home and the personnel said that he had locked the keys up for the night.  It didn’t take Mal long to figure out another plan of action after reading my stricken face.  He told me to hang on and he would go and get his pocket knife and see if he couldn’t open the one case anyway.  Well, after about an hour, the lock snapped, and to my delight, I was able to open the case.   That was the good part.  As Mal was leaving, he informed me to get a rope to tie around the suitcase, as the lock probably wouldn’t hold.  That was the bad part.

Scene III:  Well, here is come:  the most embarrassing moment that I can remember.  Scene:  Next day – wake up call – first thing acquire a rope or facsimile – anything!  Call desk – no rope.  Go out of the hotel and try to find a store with rope, string, baling wire, cord…no luck.  Back just in time to catch the Beatle bus to American Airlines.  The only thought in the back of my mind was the carry said suitcase very, very carefully.  Well, as it were, when the time came, I had to carry my train case and purse along with the delicate suitcase, because of a time shortage.  I already had my big case loaded on the bus.  John Lennon was in front of me just going up the bus stairs.  Jim Stagg (WCFL Disc Jockey and a good friend) were just behind me and Mal behind him.   By now, I suppose you have already guessed it --- said suitcase came apart and all my unmentionables were all over the place.  Since Jim and Mal both snickered, John turned around and said, “Marilyn, what a place to drop your drawers!”  All three then proceeded to help me get my “drawers” back into the suitcase which took about four minutes.  About time, everybody was leaning out of the bus laughing and teasing.

Conclusion:  The next day and a new city – Brian Epstein delivered a spindle of rope, personally, with a big smile on his face.  My face --- color it red for quite some time!

Email ThisBlogThis!Share to TwitterShare to FacebookShare to Pinterest
Labels: 1966 tour, Chicago, marilyn doerflers, Ringo Starr, With a little help from my friends