I Saw Them Walking There 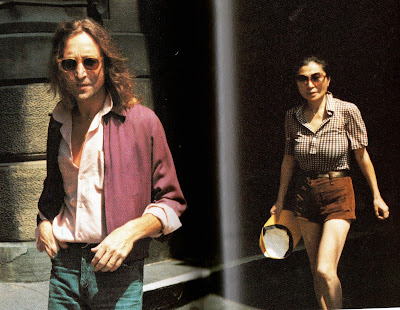 Tonight's story is a lovely story of a fan that met John and Yoko outside of the Dakota in 1980.    Photos were not taken, so I am including this photo of John and Yoko from August 9, 1980  (this story takes place on August 1).   I can't help but wonder, knowing what we know now if the fan in this story regrets auctioning off her autograph of John and Yoko on October 1, 1980.

I Saw Them Walking There

(Note from Editor-- On July 30, I was hanging around the Dakota hoping for John and/or Yoko to come out, with some friends.  With no warning, a cab pulled out, and who came out of the cab but John and Yoko.  They walked across our path and into the building.  I vowed to go back two days later, since I now knew they weren’t on vacation.)

Undaunted, I went back with Eileen, a McCartney friend.  As I’m a Lennon Lover, one would think that she might not be for me.  But we get along well together so I invited her to come along to spend the day with me hanging out at the Dakota.  We took the train from Larchmont and 45 minutes later we ended up at Grand Central Station.  Then we walked from Grand Central up to Fifth Avenue and then all the way to East 72nd Avenue.  Then we walked across Central Park.  If you are at all familiar with this route, you’ll know how tired we were.  By then it was 12:00.  We decided to just wait at the Dakota for a few minutes, and then go to lunch at the Dakota restaurant.   We were just standing on the south side, right next to the brass booth where the doorman stands.  It was August 1, and we were enjoying one of those humid, sweltering, red-hot August days.  I remember that we were looking at the windows and I noticed that the doorman was sweating.

We had only been standing outside for three minutes when I looked to my left.  No one.  Then my right.  John and Yoko were walking toward us.  Since Eileen is not a Lennon fan, I said, “That’s them” and decided to calm my shock and start trying to talk.  John was wearing his hair, that looked very blond, in a ponytail.  He was wearing a tannish terry-cloth shirt, shirt, white pans (the painter’s kind), his old pecs, and his white tennis shoes.  He really looked great and much younger than I expected.

Yoko looked great too.  She actually looked younger than I remembered in pictures, in fact, I thought she looked prettier than I remembered.   And since I always thought that she was attractive, I was really happy to see her looking so young.   She was really relaxed and subdued in an orange caftan shirt and pants.  They walked out, talking to each other, Yoko holding on to John’s arm loosely.  I don’t know how I did it, but I moved my mouth.  I looked at John and said, “excuse me, John, but would you please sign something for me?”  He said “sure” rather politely and seemed sort of amused.  I reached into my bag and pulled out my very favorite album, Imagine.    I handed him my indelible blue magic marker and the record.  He said “it’s goin’ to rub off, I think.  I’d sign it but it’d rub off.”  I shrugged because I sort of knew he would end up signing it.

I looked at Yoko, who was sort of quiet, and asked her, “would you please sign something for me, too Yoko?”  She smiled and I gave her the Wedding Album postcard.  She took the marker from John and signed it.  I had the card in a blue notebook because I didn’t want to get it bent since it’s a collector’s item.  John took it out of my hand and signed it without me even asking him!  Then he gave it to Yoko and she signed it.  She gave him the Wedding Album postcard and gave the book back to me.  My membership card from Here There and Everywhere fell out.  Yoko said, “Look, someone fell out” and reached down and picked it up.  When she stood up straight, she handed it to me!  I couldn’t believe it!  Then John looked at me and said, “Well, I might as well try the album cover, anyway,” really sweetly.  He signed it and handed it to Yoko.  Yoko started signing on his face.  “Singing on me nose, eh?” he said kidding around.  No matter how American he is, he sounds more British than anyone I know.

He asked me, “So where ya from?”  He started signing Eileen’s single, “Revolution.” He put the top on my pen and handed the marker to me.

“Upstate – Larchmont, Westchester County.”  I was still sort of nervous.  I really hadn’t expected that I would have to answer questions!  Eileen asked Yoko to sign the single, and she was really happy about it, I noticed.  John made a remark about the “bloody sticky weather.”  He said a few more things before he and Yoko seemed to be edging away.  They were so nice and pleasant.  I was really, really, pleased.

“Thank you so much, John and Yoko,” I said.  Maybe I sounded a little overzealous or silly but I didn’t care!  I have a feeling that they understood, they acted that way, anyway.

John shrugged and said, “Really nice to meet you.  Catch you later,” like he had known us for a hundred years.  He had a way of making you feel relaxed.  I mean, to contain myself when talking to my favorite person for five minutes, I must have been relaxed!  Then Yoko said, “Yes, it was very nice.”  Then they said “goodbye” and walked away.

After that, we stood outside of that Dakota for a while, watching them go.  We just looked at the autographs and everything.  A guy I met passed by in a cab and yelled out, “Hey, you finally got him, huh?”

The doorman, a nice, young guy wanted to know what happened.  I recounted my experience again and again and will probably do it forever.  That five minutes was the happiest moment of my life.  I met my two favorite people, and they were the two nicest people on earth!

Thanks, John and Yoko for living up to my experiences and then some and for being the two nicest people I ever met!

(I am willing to sell the autograph John and Yoko gave me in the little notebook.  It is a small piece of paper, a bit smaller than an index card.  IT is signed by both John and Yoko in dark blue marker ink.  John signed on top and it was signed on August 1, 1980.  The way I will conduct this sale is to have a silent auction.  I will accept all bids until October 1, 1980.  Bids received after that are void.  The highest bid will win.  If bids are ridiculous, I will consider all of them void.  Thanks!)