From time to time people ask me to post a story where Paul is not his usual happy self toward fans.   It is well known that Paul and Linda were pretty rude toward a lot of people in 1970-1971.    I do not post a lot of these stories, not because I am trying to protect Paul, but because a lot of the fans that are in the stories are visitors of this site and I do not want to make them uncomfortable or remind them of unhappy things.
Yes, Paul and Linda were both unkind toward fans and really could have handled some of their interactions with fans differently.   However -- knowing what we know now,  Paul and Linda's reactions are understandable.
This story isn't too terrible and the girl that Paul says rude things to isn't named, so I thought I would share this one for those of you who wanted to read this type of story. 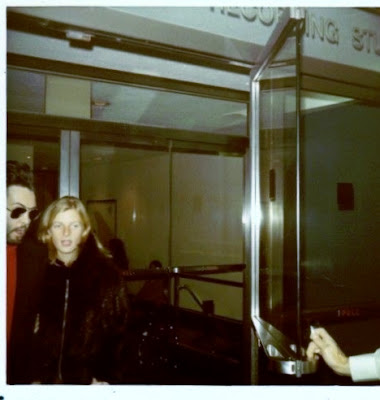 It all began on October 24, 1970, the day Sher and I returned from our 6-week stay in London’s Sloane Square.  On October 8th we see on the front page of a paper – a smiling crewcut shorn man with sunglasses, alias Paul “Martin” McCartney in all places by NEW YORK!  WE fell apart inside and decided that someone up there was against us --- what rotten timing was it for real???

So we stayed out in London until the planned day and went to New York to find no one had found him yet.  Of course, I just got back to Indiana when Sher found out where he was recording by making a lot of phone calls!

Believe me, you haven’t lived until you’ve gotten up at the crack of dawn, gone to the airport, jumped on a flight to NY, and suddenly found yourself at Columbia Recording Studios (via Sher’s apartment) in all of three hours – phew!  But Pamela and myself made it but only after scrapping her up off the sidewalk after seeing a very George looking soul leaning against a car.

Once we got there we were told we had just missed him – just what we didn’t need to hear, so we went across the street to attempt to eat but one finds it hard when you know he’s in that building over there.  At 2:30 Paul, Linda, Heather, and Mary being carried by Paul stepped out of the doors and posed for pics.  Most people bunched up around them and Heather got separated and looked petrified.  Paul wore his navy blue suit, Linda beige midi, and shawl, Linda stepped out to hail a cab as Paul turned around and said, “Please don’t’ follow us.”  Then they got in the cab and left I just stood in a happy daze after not having seen him since August 1969.  This one girl was screaming and went off to tell her mother.  Half an hour later from around the corner came Paul with Linda on his right, arms around each other.  Once they got closer, he pulled her nearer.  Two girls gave him gifts for May and Heather and he said “thank you” and then handed them to Linda.  As they got to the door, Paul let Linda go in first and as he went through, he took off his ever-present sunglasses.  Just then some girls yelled out “PAWL!” (and no I didn’t misspell it).  “Do you love me?”  Paul about killed himself laughing, though everyone outside seemed a bit embarrassed for her comment as this was 1970 and not 1964.

At 6:40 Paul stepped out of the elevator and talked to the doorman, occasionally looking out but then stepped back out of sight.  The cab finally arrived and everyone surged the door.  He stepped out then almost backed off, by they walked straight through as the flashcubes went off like bombs.  Some more gifts were given to him and he took them quickly as Linda was trying to open the cab door which was locked for some idiotic reason.  They banged on the window and still, the driver didn’t catch on as they were getting crushed outside.  Paul finally reached his hand through and opened it himself and they jumped into the cab and took look.  Linda looked relieved but they got caught in traffic not far off the block.  We left then and went back to Sher’s after eating what seemed like a 50lb pizza.

We trooped off for Columbia at 8am and had a great ride on NY subways.  I bought Paul flowers – the time was 9:20am.  Bessie came rushing over from across the street staying she was glad to not be the only one waiting.  The fingernails really took a beating that hour as we waited and talked about which way to look and on a one-way street that’s not too difficult.  His cab pulled up at 9:58, I saw him first and said “He’s in the cab.”  Sher said, “What?”  I repeated it and she said “Oh, I’m not going to look (jokingly).  He got out first as Linda paid the taxi.  He was wearing the same suit with a red shirt and cowboy boots (and looking quite gorgeous but with those sunglasses again!)  Sher went up to him and said, “These are for you,” and then handed him the flowers.  He said “Um, oh thank you.  Hey, do me a favor and don’t hang around in the morning.” And walked over to where Pamela, Bessie, and I were standing.  “Hey, look please don’t come around in the morning.  It’s a bit much.”  He gestured with his left hand for that.  It sounds odd but it killed us.  Bessie and I said “ok,” though I remember nothing – it’s that face y’know?

He and Linda went in the studio and we collapsed.  Pamela got a picture of Sher handing him the flowers but just as she took it Linda walked through and hides Sher.  The cab driver had been watching and came over and said “who is that?”  We all said in unison, “You didn’t know???  Paul McCartney!”  His comment was “Are you shitting me?”  He couldn’t believe it.  We asked where he picked them up etc and swapped Paul’s dollar for another from him and split it in hours.  HE said they had been talking nonsense stuff and he didn’t pay much attention to them.  It sounds odd but that dollar had such a clean smell to it – later we found out to be British Sterling Powder.

Later when the numbers had increased considerably, while we were waiting a few businessmen stopped and one said: “These girls stand here day after day their sexual frustration must be phenomenal.”    Paul and Linda came out about 2:00 and a Hells Angel reject (ha!) ran up and flashed a cube right in his eyes which he wasn’t happy about.  They got in the can and someone yelled “Turn around Paulie Baby” he glared and said “Don’t you call me that, you_______ (Sara's note - not comfortable putting the unkind word he said here) then the cab left.  The girl was upset and kept saying that he’d said “schmuck” but we all knew that wasn’t it.   Peter, a guy waiting there, said he liked the way Paul walked – like he was walking on air.

The cab returned at 4 and they sat there a minute before getting out.  Then Heather went in alone Paul was carrying Mary and then Linda got out.  The girl ran up and said, “I’m sorry.  I didn’t mean to offend you,” to which Paul said, “I don’t even know what you’re talking about.”   Then she said, “I don’t want you to hate me.”  Paul’s answer as he passed through the doors was under his breath but, “I don’t even know you.”   There is more that happened but space is limited so I’ll end here.  It was great seeing him though depressing too because you realize how distant you are from him even though space-wise you’re so close.