Meeting Paul and Linda in 1974 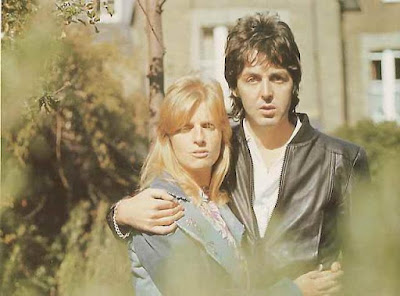 For the first 3 ½ weeks of our trip which started on September 1st, it seemed that we weren’t going to get to see Paul at all to speak of.  We’d seen him once very briefly as he went by in his car, but that was hardly enough to satisfy us.  However, we had vowed that we were not going to bother him at his house so we kept waiting for a better time and place to come along and hoping that in the end there would be something to the old adage that all things come to those who wait.

As it turned out our patience was to be rewarded, but the ironic thing about our first encounter with him was that it came completely unexpectedly.  That, by the way, is the key to success.  Never expect anything because when you do it usually never happens.

In my case, after much thought, we finally decided to go to the house on the 24th just to leave some things for Linda’s birthday.  We fully expected Rosey to come out and fetch the gifts, nothing more.  Who should come driving up just after Marie had rung the bell and Rosey had answered?  None other than Paul himself of course, and when we saw that call pulling up, I think we all wanted to turn and run the other way!  But, luckily, we didn’t and Paul immediately bopped over to us thinking the gifts were for him!  But after Maire had explained that they were for Linda’s birthday (Paul: “Oh, you’re waiting for Linda?!?!”) he then offered to go in and get her for us.  However, Marie told him that someone was already on the way out for the gifts and just then Rosey appeared to prove our point!  We had him so confused!

So anyway, he then asked Rosey if he could come in and told us that he’d see if Linda could come out “if we didn’t mind waiting” (sure Paul).  But as it turned out Linda was napping at the time so he asked us if it’d be alright if he took things to her.  Marie told him that “Yes, he’d do” so he took the flowers from her (asking if she’d come over from New York again!) and then he asked me if I wanted him to take the cake, I was holding onto her as well – at which point Marie told me to “go ahead and give it to him – that I could trust him!”  So, I did while saying something like that would be just fine with me.  Then just before he went in, he told us that we could come back the next day to see Linda and for photos of both of them if we like – first asking if 6:00 would be okay with us and then changing it to between 12 and 1 when he remembered that they were going to be mixing tapes later one.  So naturally, we did come back on the following day and in some respects, that day was even better!

I say that mostly because of the fact that they posed for photos with us – which was especially nice for me since somehow ended up standing by Paul, with him having his arm around me, while Marie ended up standing by Linda (with no offense to Linda!).  I’m still not quite sure how that happened or how I ever got so lucky for once in my life, but in any case, I certainly enjoyed it.  It was probably thanks to the fact that Linda loves Marie and monopolized her every time we saw them!  But, still, I think that Paul and Linda enjoyed being photographed as well – especially Paul when he noticed that Barbara had a movie camera – started doing this little dance for her that was just so cute!

The next two times we saw Paul were again from a distance –first from across the street at E.M.I. when he was mixing tapes there and then a few days later at a hotel.  We had big plans for that night - like already being in the hotel restaurant when he walked in, but too late we found out that we had to have reservations well in advance for that so we had to settle for watching him walk by from the lobby.

Then finally the 2nd week of October he started work on the new LP at E.M.I., so we got to see him several more times there and he stopped to talk with us at least briefly each time.  One night in particular Marie even had to help direct him out of his parking place – he almost hit the car next to him---twice!  But I guess the most memorable night at E.M.I. was the last time we saw him.  Marie told him that we’d come to say goodbye since we’d be leaving England in a couple days so he stopped and talked for a while. He asked us about our trip – what we’d done and if we’d enjoyed ourselves this time.  Linda told us that they’d gotten the card we sent them in Scotland.  Then Marie told Paul that Mimi had asked him when he saw her Paul said, “Oh?  How is Mimi?”   We told him just fine and about how nice she’d been to us.  And then Marie added that Mimi did miss John, though and Paul said, thoughtfully, that he imagined she would.  Then somewhere along the line, Paul noticed that there were two guys “with” us – one a pen friend of Marie (Hi Dave!) and the other a stranger to us.  So, he asked us if they were friends of ours, to which Marie very enthusiastically replied, “Yes!”  But that didn’t seem to satisfy Paul because then he had to add “How long have you known them?” Well, as you can imagine, we were quite enjoying the whole course this conversation had taken and would have let him think whatever he wanted – but then the one guy had to go and spoil things by saying he’d only met us a few minutes ago (darn).  However, not to be completely discredited Marie piped in that we had known Dave for a while.  It really was cute to see Paul’s reaction, though – his ego just couldn’t take the thought of us looking at anyone but him.  Then Dave asked him about his touring plans and the other guy asked him about his new LP.  So, we stood talking for a few minutes about that, and then Paul told us goodbye and to have a safe trip home.  That was a great way to end what had been a very special trip for us but on the other hand, it also made it even harder than it already was for us to leave.  He had been so nice to us and so natural, throughout our trip – but then we hadn’t made a nuisance of ourselves at his house like we could have very easily done.  The temptation to see him and talk with him every single day was great but, in the end, it was worth a lot more to have had just a few very special encounters with him than to have had many encounters with him but some of them having been unpleasant.  Paul really has a tremendous amount of patience and tolerance where fans are concerned – but he is human and can only take so much, so please, whenever anyone is planning to see him – remember that, consider his feelings and let’s not blow this special thing we have with him!