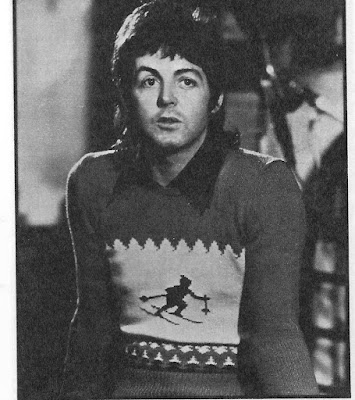 A Big Howdy from Europe!

By Patti from Texas

We arrived on Christmas Day (1973).  I was the instigator to find Paul as Sandy was after the chap who hides in Henley.  As it was Christmas Day we decided to definitely respect that and not go to St. John’s Wood.  So much for that!  We went with the idea of just seeing the colors of the house.  I took the presents along all the same.  After watching the colors.  I rang the bell.  It was about 4:30pm and getting dusk.

“Hello!?”  It was such a funny voice that answered that I thought it was Rosie.  As I was explaining that we were from Texas and had presents to leave I realized it was not Rosie.  “Wait just a minute!”  The door opened and feet stomped out at a run.  The gates opened and I was expecting to see one of his cousins or someone.  Wrong!  It was Paul standing in front of us, all smiles and huge eyes with an ‘ok, where’s my presents?’  I checked twice at his face because   I wasn’t sure it was him!  He smiled and said, “Where are you from?”  I said “Texas” again and said I was really sorry to bother him at Christmas.  Paul said, “You’re not bothering me.  Well, it’s Christmas Day!”  He then asked us how we got there.  I wasn’t sure which he meant – to England or to Cavendish Avenue.  “How’d you get here?  By car?”  He looked up the street.  I answered no and Sandy answered, “walked.”  That must have been jumbled as we said it together.  I handed him the presents and said “Now you’ve got to be sure to give them to the right people.”  I found myself saying this in a tone – sort of joking.  “Ok!” said Paul.  I was disappointed Linda didn’t come out.  I read in the English paper that her family from New York was there for Christmas so I assumed they were all inside.  I asked him if Linda was there inside and he said “Yes, we’re all home.”  I explained the Horseman’s Bible was for Heather and he began flipping through the pages.  I gave him Why Kill To Eat (a vegetarian cookbook) for Linda.  “Good, she’ll like that.”  That made me feel good.  I must say here that I thought then I didn’t see how he took it all really and remains so happy and sincere.  He was so warm.  It was calming.  I was quite nervous but wanted to show him the respect he deserved.  I gave him the Christmas stockings of candy for the babies.  I didn’t know if they could have candy.  “Sure they can!”  That was another very warm statement.  Then we handed him the black western hat with a few feathers in the band.  “Oh, a Stetson!”  Clever lad.  I said, “No, not quite,” as it was slightly less expensive.  He put it on to model.

I asked him if I could take a photo.  “Sure you can!”   I asked if he thought they would come out as it was getting darker.  “Yes of course!”  Quite confident.  I don’t know what I was expecting – like him to say “would you rather come inside and take them?”  I also said, “Do you know what we did today?”  Why I said that only shows nervousness.  I Was rather proud of our walking 4 miles to Buckingham Palace from our hotel at Kensington Gardens.  Paul said, “No, what?”  I noticed the dogs pouring out of the front door.  I said, “Oh! You’ve got more than Martha!”  Anything for conversation.  He said, “I’ve got four!” He was very proud.  He then introduced a few.  “This is Martha and this is her husband Lucky!”  I asked if I could photograph Martha and he said something about being careful.  I didn’t understand.  I asked him if she was afraid.  He said “No.”  I reached down to pet her and he began rubbing his arms with both hands.  He was cold.  He said, “Okay, one more now because it’s cold.”  So he posed again.  He still looks about 21.  By coincidence, he had on a silk western shirt that was really fantastic!  Huge flowers and black.

I told him to tell Linda hello.  He said he would.  “Ok then, it’s Howdy from Europe!”  The typical McCartney!  We laughed.  He told us “tarrah” and closed the gate and we heard him run back to the door.  He was marvelous.  I talked to Linda later on the intercome as Poppy (the Lab) followed us one day.  She was very nice and thanked us for returning her.  I talked to Heather on her birthday and gave her daffodils.  She said she remembered me from last year so that made me feel great.  That day Sandy and I were with two pals from San Diego.  We met by chance, Cindy and Maryann.  We were quite relieved to meet two friends and not two who were going to have to debate with.  Paul and Linda are loved and respected in England.  They seem to be everywhere!  And so on that note, it’s a big “Howdy from Europe!”