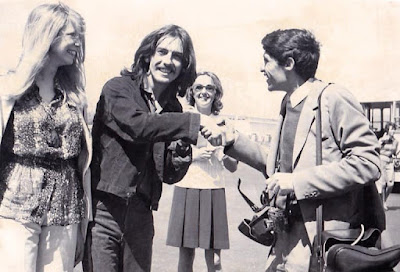 Remember in  "Get Back" the newpaper article John reads about George being involved in a lawsuit with a French photographer?    The photographer was taking pictures of Geroge, Pattie, Ringo and Maureen as they left a nightclub in the French Riverea in May of 1968.    George tripped the photographer, causing the man to fall and injury his knee -- needing 7 stitches.

Well that photographer was Charles Bebert who ended up dropping the charges against George.   Whenever George and Pattie came through Frane again in June of 1969,  these photos were taken of George and Charles shaking hands and making amends.

And so once again all is well in Pepperland.