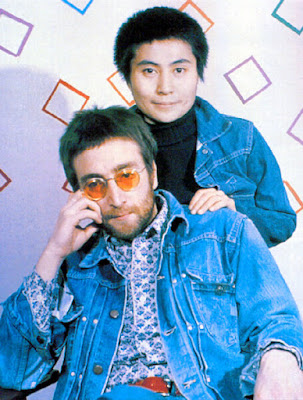 With six hours of sleep behind us, I dragged myself from bed after being awakened by the words “John and Yoko in L.A.”   Those words came from three friends on their way to L.A. for the search.   We picked up one more and moved onward.

We got to L.A. at 10:30 and went to the Beverly Hill Hotel where it was said that John and Yoko were staying.   We drove by a few times and up the ‘visitors only’ driveway.  Nothing.  We decided to drive by one more time and then go eat.  “I saw John.”  Among the screeching of brakes and voices, I asked where.  Kathi said she’d seen him on the second-floor balcony.  We pulled across the street and waited.  And waited with eyes glued on the balcony.  Three of us left and went into the ________ (leek, look, lock??) to ask if John and Yoko were there.  The man said no.  Cindi and I left to get some flowers.  The others stayed and kept watch.  We got carnations and took them to the desk clerk, but he said John and Yoko had checked out a week ago (Oh sure!  They didn’t even have a Visa a week ago!)  So, Cindi said, “thanks for nothing!”  We stomped out and went back to the others.  We decided to go to Phil Spector’s house and leave the flowers with him.  We left a note to John and Yoko saying we were sorry we couldn’t give them personally.  We left them on the doorstep.

We drove up to Blue Jay Way and saw the fog then drove home.  We were all disappointed.  Do Beatle fans give up this easily?  Well – one more time!

I called work and told them I had to go to L.A. for an important appointment and wouldn't be able to come in.  I went to pick up Barb, and we headed to beautiful L.A.

When we got there, we went to the Beverly Hills Hotel, but we didn’t see anything.  We went into the lobby, and Barb called a friend who lives in L.A. to see if she knew anything about John and Yoko.  She said they went to Stefenino’s Restaurant on Sunset Blvd. at about 6:00.  By the time she finished talking it was 4:30. We decided to make the rounds of all the houses The Beatles had ever stayed in.  Why I don’t know.  We tried Phil Spector’s house.  We drove up to it and by it.   It looked deserted.

We finally made our way back to Stefenino’s.  I parked the car four blocks away on some empty street with a two-hour parking limit.   We went to the restaurant, and Barb asked Randy (the doorman) if John and Yoko were coming tonight.  He said they’d come between 6 and 7.  It was almost 6:30 then.  We went up to the corner and sat on some steps.  About 10 minutes later, Randy said John and Yoko had just pulled in.  “Where, Where?”  He pointed to the building next to the restaurant.  We ran down there and saw John and Yoko go up in the elevator.  We waved, but the door had already shut.   We got so excited!  We thanked Randy and went and got the car.  We drove to a gas station and phoned Cindi.  She said she wasn’t coming up but for us to stick it out.  Which is just what we intended to do.  I found a place to park closer to the building.  Well, we were afraid to go into the building and wait.  First, because there were no chairs, and second because we didn’t want to feel like idiots.  We brought some food (well Coke and peanuts, real nourishing stuff) and sat across the street.   We finally decided to go inside and wait.  I guess we didn’t care what people thought.  Randy wandered through a few times with little remarks like “having fun?” “Still waiting?”  Stuff like that.  We looked at the registrar that had the names of the people that worked in the building.  There were all sorts from psychics to music publishers to accountants to movie agencies.  We wondered what they could be doing.  At 9:00, the security guard came in.  We both thought ‘this is it.’  But he didn’t ask us to leave.  He knew we were waiting for John and Yoko.  He said they come down from the 5th floor at 10:00.  Neither of us had a watch which was kinda good otherwise we would have both had heart failure at 19, and we’re only 19!

We watched the elevator thingy.  You know – one of those things that tell you where the elevator is.  It seemed like years.  Barb decided she was going to get their autographs.  Braveness!  It finally happened.  An elevator was coming down from the 5th floor.  I was on the other side of the room.  I can’t express in words the feeling I had.  The doors opened…and there they were.  Barb got their autographs just as they came out.  They both smiled.  I just looked.  We watched them walk down the steps to the garage.  I ran out and saw them pull out.  Barb came out, and we just looked at each other.  We went and got the car and drove up the driveway of the Beverly Hills Hotel.  We didn’t see a light green car anyway.  We left, satisfied.  And drove on homeward bound.

John looked so different than any picture.  He looked so small but maybe he just seemed that way to me.  He was thin, real thin.  His hair looks good short.  It seemed to have grown out a lot.  He had a beard.  He was wearing jeans and a jacket to match.  He reminded me of a little boy.  Yoko is so much shorter than he.  She must be about five foot.  She looks so much better in person as does John.  She was wearing dark pants and a white turtleneck sweater.

Barb and I still can’t believe we had that kind of luck.  We’ve never been lucky when it came to The Beatles.  We couldn’t believe it was real.  What a beautiful sight every time I close my eyes and remember.