Tonight I have a nice fan story written by Pamela Elijah.  It was originally published in the 1971 newsletter for members of the Beatles Fan Club in Indiana.

Those of you who write to me regularly know that I went to England this summer, and I have received several letters asking for details of my trip.  I thought it would be easiest to put it in this newsletter rather than trying to write all the details to everyone.  I was accompanied by Tempy Snow (Area Secretary for Vermont and Mass.).  We left Boston on June 7th and arrived in London on the 8th.  We both stayed with friends in Streatham, which is a section of Southern London.  Though we didn’t stay together, we were lucky enough to be within walking distance of each other.

On our first day there we learned that George was working at EMI studios on Abbey Road, producing a single for Badfinger.  So on June 9th, we decided to go down and try to see him.  We arrived there at 5:15, only to learn that he had gone in at 5:00.  We decided to wait until he came out, and during the time we waited, we saw him come out into the hall a few times to talk on the telephone.   As it turned out we didn’t wait for him.  We left at 10:00 because it was so cold that our bodies were beginning to go numb.  (I later found out, when watching the weather on TV, that it had been the coldest June in England in 20 years!)

We went back the next day, the weather was warmer but it was raining, so we decided that if we could see him go in we’d leave then. (We had both developed colds from the night before).  There were a few people there.  Tempy and I were with Carolyn Mitchell (from Utah) and Val Furbish (She was formerly the Area Secretary for Delaware, now lives in England).  There were a couple of girls from New York and one of the Apple Scruffs.  We were all waiting patiently when suddenly the rain stopped, and just as it stopped George’s car pulled in.  One of the New York girls went up and talked to him for a few minutes.  He walked past my friends and I went up the steps.  When he got to the top, Carolyn called out to him.  He leaned down and asked what she wanted.  She was going to ask him for the lyrics to “Ain’t That Cute,” which is a song he had written for Apple artist Doris Troy.  Being very nervous, she ollked {sic] at him and said “Could you get me the lyrics to ‘Ain’t She Sweet?’”  He looked rather confused.  Val jumped up and said, “Cute!”  George then asked if they mean “Ain’t That Cute” and said he would get her the lyrics.  (He never did.)  I can’t remember what else was said, only the way he looked standing at the top of the steps.  He was wearing blue jeans, a denim jacket and cap, and a yellow shirt with Sanskrit writing on it.  He had cut his hair shorter the week before.  As soon as he went in, the rain started again.  This was all I saw of George as he left that Saturday for the States.

June 13th I went with Val to see Ringo’s house.  It is in Hampstead, which is very lovely section of London.  It’s a big brick house on a quiet little street.  We played with Mr. Villoughby (Ringo’s Siamese cat) and then Martin Lickert (Ringo’s chauffeur) came out so we talked to him for a while.  We saw Zak and Jason playing in the garden.  Zak seemed very quiet, while Jason was just the opposite.  When he saw us he started to yell and scream, which caused the dogs – a poodle named Tiger and a collie named Sophie to start barking.  Jason started spitting at us, as Val said he is a “pretty normal little boy.”  Maureen must have heard all the commotion because it wasn’t long before she came out (dressed in a Superman t-shirt).  She looked very annoyed to see us, so we turned and quietly left.  IT was at this point I decided it was best not to bother them at their homes.

On June 15th  Tempy called to tell me she found out Paul was going to be at EMI the following day and we made plans to go down.  However, later that evening I began to feel sick and found out my cold had led to tonsillitis.  So while everyone else went to see Paul, I ended up in bed.    I heard he was very nice, and Vicky Bell (from Cleveland) gave him flowers for his birthday.  He thanked her saying it was “wonderful.”

June 19th Val, Carolyn, and I went to an all-night Beatle festival on Portobello Road.  They showed A Hard Day’s Night, Help!, Yellow Submarine, and Let it Be.  They began at 11:30 pm and ended at 6:00am.  The theater was packed and it was almost impossible to find seats.  By the time the movie started every seat was taken and there were people packed in sitting in the aisles.  No one can say the Beatles aren’t popular anymore.

Since George was out of the country, we decided on June 20 to go to Henley-on-Thames to see his house and take some pictures.  It’s a beautiful place.  He has two small houses plus the huge one which you have probably seen pictures of.  He is now living in one of the smaller ones while the large one is being fixed up.  His land seems to stretch on forever with all sorts of beautiful trees and flowers.  While we were there we saw Terry Doran (George’s assistant) and Greg French (George’s cousin from Florida who is living with him).

July 1st Tempy and I went to Apple to meet Pattie O’Neill and Mar Young.  When we got there they said Maureen was there, so we waited until she came out.  She seemed very shy.  Mar gave her a scarf and seemed very pleased with it. 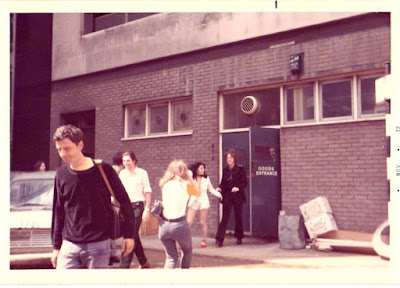 July 16, John and Yoko made an appearance at the Claude Gill Bookshop to sign copies of Yoko’s book “Grapefruit” which was just released in England.  When Vicky, Tempy, and I arrived, it stretched back for blocks.  We got in line with Patti and Mar.  When John and Yoko arrived, the whole crowd surged forward.  There was no more line, just a huge mass of wall-to-wall people.  I’ve never felt so closed in all my life, as I couldn’t move a muscle for at least 15 minutes.  I nearly fainted a few times and completely lost all my friends.  Luckily, John and Yoko were safe behind a table, signing books.  After about 25 minutes I somehow grabbed a book and got out.  I later found out Tempy had been pushed right up against the table and she got to stand there and talk to John.  As people got their books they began to clear out, so by the time they left there were only a few people around.  Vicky found out from a boy who worked there that they would leave by the back entrance.   We went out and waited for them there. Besides us, there were a few girls from Denmark.  John looked wonderful, wearing black trousers and shirt and a black jacket with little flowers on it.  Yoko was wearing a red and white hot pants suit.  They signed autographs for a while and then left in John’s white limousine.

July 18th – Sarah Nolte called to tell me that she had been able to get me a ticket to George’s August 1st concert at Madison Square Garden.  So I made plans to come back early in order to get to the concert.  As it turned out I missed the concert, but I was lucky enough to see George, John and Yoko, Maureen and the children in England.  There’s so much more I could go into …the days we went to Apple…seeing Neil Aspinall and Mal Evans, and so much more.  But if I mentioned all the little things, I’d go on forever.