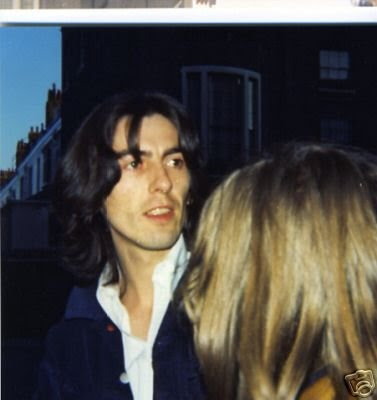 Around The Beatles Fan Club newsletter

I arrived in London early in the morning on Tuesday, May 21, 1968, determined to see Paul’s house and EMI.  Even if I never saw them (and I was pretty sure I wouldn’t), at least I had to see Paul’s house.  I love all the fellas, of course, but Mr. McCartney holds a special place in my heart.  A week and a half later found me footsore but happy.  I was in Beatleland.  But, as of yet, I had not made it to St. John’s wood and Paulie’s abode.  It was now Thursday, May 30, and the next day would be my last day in London.  It was act now or never.  So at about 2:30 or 3:00, I hopped on the #159 bus to St. John’s Wood.  I hadn’t a clue as to where I should get off the bus.  I asked several people where I might find Cavendish Avenue, and no one knew.  I began to feel as though I were getting the run-around.  Finally, one kind lady said she was sorry she didn’t know, but if I asked the porter in the apartment building she’d just come out of, he should be able to tell me.  I thanked her and off I went to find the porter.  He was very nice.  He pulled out his little map and directed me to Cavendish Avenue.  I got to Abbey Road to Circus Road, turn left, go two streets down on Circus and that should be it.  It was!  There’s no number in front of Paul’s house, but the writings on the gate clearly indicate where he lives.  There was no one around, and I felt rather conspicuous with that huge camera slung around me.  But I got a picture of the house and Pal’s dark blue Austin Mini.  Then I got a picture of the street sign.  A couple girls came by and asked if I was waiting for Paul to come out.  I membered an answer, and they told me he wasn’t home.  They’d spoken to the housekeeper a bit earlier and Paul and the other three were all at EMI recording.  So, I trotted off to EMI.  As I was standing there, Peter Asher came out and nearly bumped into me.  Then Mal pulled up in the Beatles van.  I got a photo of him too. Some man came out and asked us (a few other girls had begun to arrive) if we were waiting for The Beatles.  If we were, it would be a long wait.  They would not be out until midnight or after

The next day, Friday was my last day in London.  Saturday I’d be leaving for Liverpool.  I got up early and caught the bus to Baker Street and took the tour of Madame Tussauds.  I tried to find Apple, but couldn’t.  After arguing with myself for some time, I decided to go back to St. John’s Wood and see if I could see THEM today.  I parked myself in front of EMI about 1:45 and just waited.  I sat across the street so I could have a full view of the entrance. A little before 3:00 things began to happen.  Cliff Richards went in.   Then Mal came along again.  I saw this terrific-looking bod dressed in a cream-colored Indian outfit come walking along the street.  By the time I realized it was, indeed, John Lennon, he’d disappeared behind the gate of EMI.  I was stunned.  I couldn’t believe it!    Finally, I gathered what was left of my wit and went back across the street.  Pretty soon George Martin arrived in his white sports car.  Next to come was George Harrison in his gorgeous white Mercedes 600.  I hadn’t found my tongue yet, but I did get a picture.  Ringo came next.  He, too, had a Mercedes 600, only his is black and chauffeur driven.  He hopped out of the front seat and headed for the gate.  I finally found my voice and asked for his autograph.  He looked at me a second, then signed – resting his right hand on my left wristlet as he put down those dear letters.

By now it was almost 4:00.  I decided I’d wait for Paul (my love) until 4:30. Then I’d go back to the city and try again to find Apple.  Well, 4:30 came and went (Mal had gone too) and I head for the bus.  I took another look at his house, then as I looked over, I recognized the Beatles van, Mal Evans and Paul!  He was dressed in a dark shirt.  That’s all I really got a chance to see.  But he looked wonderful.  He was talking to Mal and kind of looking around.  Well, I could have kicked myself.  I might have spoken to him.  Even got a pic or an autograph.  But I was happy anyway.  I found Apple and went in.  It’s very small and is on 2 floors.  The main floor is trinkets and downstairs is all clothes.  I went downstairs to look around and suddenly heard a female voice say “Hi George.”  I looked and who should be standing next to me but George and Ringo!  After a bit, I decided I shouldn't just stand around and stare, so I went upstairs and out.  But George and Ringo decided to leave at the same time and were right behind me all the way to the sidewalk.  I went to England thinking that I’d never see even a glimpse of one Beatle.  But got so more than a glimpse and I saw all of them.  I never realized how four men could generate so much excitement.  But they do.  Just being in the same general area gives a person a feeling of elation.  I left London feeling so enriched by what I had seen.  Everything was so great.  But my last day was by far the best!