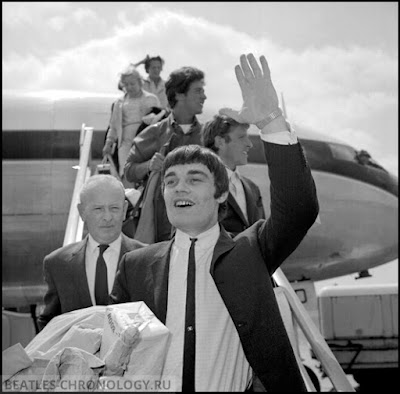 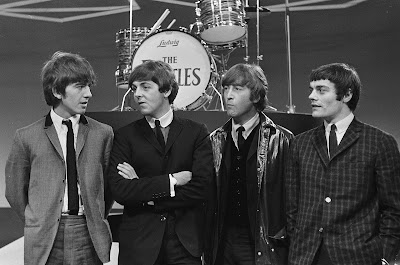 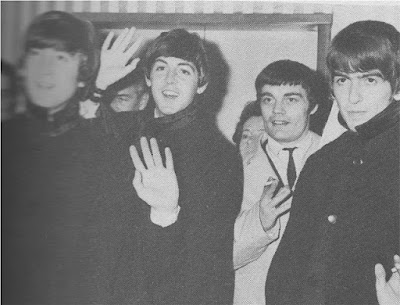 Jimmie Nichol has always been quite a mystery.  Jim Birkenstadt unraveled much of the Jimmie mystery in his book, The Beatle Who Vanished.    Jimmie was only heard from a handful of times since he departed from the Beatles in 1964.   One of those times was when he appeared at a Beatles convention in 1984.   I found an interview Jimmie did with Evert Vermeer (EV) for Beatles Unlimited and was published in April 1985.   I am going to just share the part of the interview that is Beatles-related.

EV:  It has been said that technically you were a better drummer than Ringo Starr.

JN:  Without being unkind, Ringo Starr isn't really a drummer.   On some of the recordings he played really well, he's got a good feel when they get together.  But the Beatles weren't  the greatest band.  In fact, as a group, they were pretty bad.

EV:  Well, some of the live appearances may have been appalling, but the atmosphere was there.

JN:  Well, they didn't really care about live concerts.  And the equipment didn't match the acoustics.  Nowadays you can hire a company to handle just the sound acoustics, but they didn't have that.

EV:  Are you doing anything at all in music now?

JN:  Oh yes, I'm composing and recording my own music now, but just as a hobby, because I'm mainly concentrating on my company.  I have to be able to create the right environment to make music.

EV:  Would you say those days with The Beatles helped you on in your career, or do you see them as  a disadvantage?

JN: No, nothing in life has been a disadvantage to me.  And if it has, I've always turned it into an adventure.

EV:  How did you feel you fitted into the act with the other three Beatles, who had been a close unit for eight years or so?

JN:  As I said at the convention, I'm not prepared to disclose that now.  But that will come out in the book, because I think that's very interesting.

EV:  But you must have had the feeling you were more or less the odd man out.

JN:  In retrospect, analyzing what actually happened, I get that impression as well.

EV:  It must have been a fascinating experience to be inside that circle for a while.

JN:  It was disappointing.  Not fascinating, because I had been used to it before.  When rock n roll first hit I was touring with screaming kids.  That was another reason why they chose me.  They knew how I would act as a person coming into a pre-made image.

EV:  But you had to be a bit of an actor playing a Beatle?

JN:  They didn't want to admit, even though it was written in black and white, that there was anybody else playing the drums except Ringo.  They wanted to present The Beatles as The Beatles, as a whole.  Obviously, they were extremely afraid of a failure on the tour, of an outsider coming in.

EV:  There is a photo of you leaving Australia after Ringo got back, on which you're waiting for your plane.  You look awfully lonely on that.

JN:  Oh yes, that's a beautiful picture.  Well, if you look at that photograph, that answers your question.

EV:  Did you feel you were being dropped at that point?  And afterward, did you ever hear from Epstein or any of The Beatles?

JN:  No, not at all.  Ringo came back one day and I left the following morning.  I will include my suppositions in the book.  Obviously, because I was part of the internal politics, I saw and heard many things, but I never commented on them.

EV:  Were you contracted for the whole tour?

JN:  No.  It was on a daily basis, actually.   I never knew from one day to another whether I would be going onto these different countries.  Probably, that put a lot of pressure on me, this situation makes you uneasy, and I wasn't as mature as I am now.

EV:  How were you received by the fans?  Did they accept you as a Beatle, or did they really make you feel like a stand-in?

JN: Basically, the fans had no choice. It was either The Beatles with me or no Beatles at all.  But of course, no one is indispensable.  If I hadn't been the right person in the right place at the right time and with the right background, obviously someone wise would have done the job.

EV:  Was there any audition?

JN:  Just one rehearsal in the studio with George Martin.

EV:  After you went back to England, did you ever meet anyone?

JN:  No.  Never. One time I was playing in a club in London, and George happened to come in one evening with a lady friend, and he sent the waiter with a drink.  But I declined the offer.

JN:  My dear sir, I have my self-respect.  I will not be bought by anyone, even if it's to my disadvantage.

EV:  Did you feel George wanted to make up for something?

JN:  Ooooh yes, of course.  We both knew what had happened.  It was one of those situations where no words have to be spoken.

EV:  Do you have any fixed ideas about your book yet?

JN:  No.  There's a lot of work to be done.  We want to be in complete control of everything.  The book does have potential and distribution possibilities worldwide but won't have a bad publisher.  It will not be a Beatles book, although commercially speaking, the Beatles will be the selling point.

EV:  Aren't you afraid that some fans will be offended by any negative remarks in the book like some of them were by things in Peter Brown's book that harmed their idea of The Beatles?

JN:  I think negativeness can be taken by rational people.  Of course, the dirty bits will be good for the sales, but it would be pretty sensationalism.  But my intention is not to do an expose-the-Beatles type of book.  That's all been done before.