George does not like punk or disco - visit to Brazil 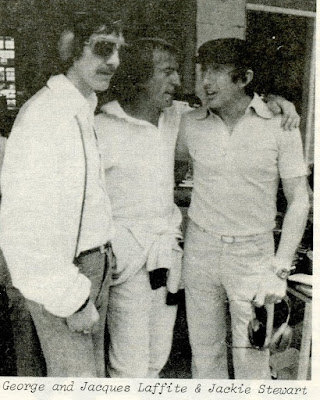 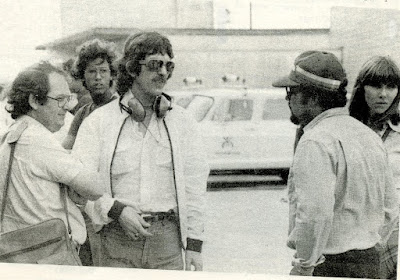 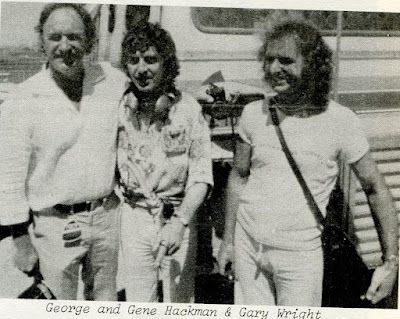 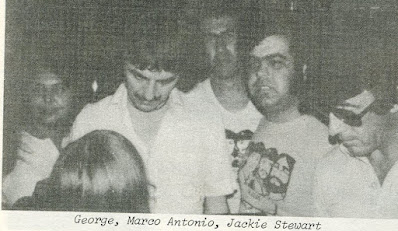 George was the first of the Beatles to come to Brazil.  The reason for his trip was the Formula One Race that took place at Interlagos, Sao Paulo.

The Arrival:  Since early in the morning of January 31, 1979, the Rio’s International Airport Galeao was taken by hundreds of people of all ages, who waited impatiently for the ex-Beatle George Harrison (rumored to arrive at 7:45a.m.), but the Concorde didn’t land in Rio until 4pm.  George, who arrived through the main gates of the airport, accompanied by his pal Jackie Stewart, got frightened by what he saw.  At first, he did not understand what it was all about.  The screaming girls crying his name and the constant blinding lights of the flashbulbs in his direction were enough for him to try and “escape.”  The police had to interfere in order to calm the place down so that George would be able to get into a waiting car.  “Never thought I was famous here,” declared George later to the press.  He stayed in Rio one day at an unknown place (said to be the house of the millionaire Jorge Guinle).  The next morning George set out for Sao Paulo where he stayed at the Hilton Hotel.  Soon people found this out and surrounded the entrance of the hotel equipped with their cameras in hope to catch a glimpse of George.

The Visit:  George’s intention was to remain unnoticed, going along with the arrangements at the Boxes of the cars in peace, but instead, he spent most part of the time running away from the fans (which he is very good at) and the photographers, who could not let him alone.  He said, “You should photograph the cars.  They are more important than I am.”  However, George did give his autograph to many who asked him.  Back in Rio, Harrison gave two collective interviews.  One to Globe Television and one to the Manchete magazine.  He also talked to many D.J’s including pressmen from Bandeirantes Radio Station and Cidade.  Always very polite, he answered all the questions and posed for photos.  He talked about many things:  Beatles, religion, sports, his previous records, music in general (he said he hated Punk), his involvement with Formula One, and the song “Faster” that he wrote, dedicated to Ronnie Petterson.  He said he liked Brazil very much and intends to come back in 1980.

The following answers George gave at several press conferences during his stay in Brazil.  The interviews were transcribed by Erik M. Bakker and edited by Evert Vermeer.

G:  Well they are past aren’t they?  What is left is in the history books and from what we’ve learned and if we learned anything from it, it means something.  If we haven’t, it is best to forget them.  There were quite happy times and turbulent times, a lot of wars, a lot of change.

Q:  Is anything left of these changes?

G:  Yes.  I think so.  For a start, it made some young people, and older people as well, more conscious of the fact that you don’t have to be particularly limited in your ideas.  It opened up ideas like everybody is asking me about Indian music or Indian philosophy.  15 years ago at the beginning of the 60s, people would think you were a freak if you did yoga exercises.  But now a huge percentage of the world does yoga exercises.  I think the 60s did help to broaden understanding.  You know, when someone liked long hair or didn’t wear a tie, people used to think they were broken.  One thing was a disappointment.  At the end of the 60s, beginning of the 70s, the idea of “All you need is love,”; which was a good idea disappeared and it all got back into disco music and music for idiots.  People started fighting again and all that.  So I hope maybe the 80s may bring back “start planting flowers” again and having a bit more love really.

Q:  Do you think there ever will be any group which will substitute the Beatles?

G:  Well, there may be groups that can sell as many records.  But the Beatles were unique because of the four personalities.  “The Beatles” was bigger than the four people separately.  There is always someone like Sinatra and Elvis and the Beatles, and maybe somewhere down the line there will be something bigger, but not now.   Not like the Bee Gees, they make good records but they don’t’ have whatever it was the Beatles had.

Q:  Are there any unreleased tracks by the Beatles?

G:  “Not Guilty” is on the new album, actually.  I wrote that song for the White Album in 1967 and I forgot all about it.  I remembered it last year and we re-recorded it and it’s really nice, it is good, sort of jazzy.

Q:  Which one of your songs do you like best?

G:  I don’t know, whichever you like best, is the best for me.  “Something” was good for me because it had about 150 cover versions.  It is nice if other people make recordings of your songs.  But there are some other songs that are better.  There is a song on the last album I  think was as good as “Something,”  “Learning How to Love You.”  And there is a song on the new album, “Your Love is Forever,” which is as good as “Something.”  But it might not be as popular because it was The Beatles who made “Something.”

Q:  We heard your latest record is dedicated to races?

G:  Only one song out of the ten songs.  One song is about my wife, one song is about the moon.  But all songs are about different things, and well, there is one song about races, because when I went to the races all the time, everybody kept asking me “are you going to write a song about it?”  and so, in the end, I thought I’d better write a song.  It took me 6 months thinking how do I start because I just didn’t want to write about engines and wheels and noises.  So I had to think of a way of approaching which had some meaning.  It’s called “Faster” and I think the words are good because it is abstract, it is not about one person.  It could be about anybody and not just about cars and engines.  It is about the circus around it you know, and the feelings people have and the jealousy, all that sort of things.  The song really was inspired by Jackie Stewart and Nikki Lauda, and I got the title from a book Jackie had written back in 1973.

Q:  What is your opinion of Brazilian music?

G:  You know, I like the more wild music.  I don’t mean noise or discotheque.  More original music.  If Warner Brothers have any good Brazilian music in their catalogue, I’ll take them home with me and study them.  You know, in Europe, for 150 or 100 years it was very popular to do the rumba, samba and that sort of thing, so in broad contents, everybody is aware of Brazilian music, conga drumming, that type of thing.  But I must say I’m very ignorant when it comes down to more specific things.

Q:  Do you think disco music as a relation to Brazilian music?

Q:  What about Punk music?

G:  Rubbish, total rubbish.  Listen to the early Beatles records.  They were simple too, but it still had much more depth and meaning.  It was innocent or trivial, but it still had more meaning than Punk music which is destructive, aggressive.

Q:  Did you have any more problems with “My Sweet Lord” lately?

G:  Well, in America it’s all become a complete joke because the man who wrote the song “He’s So Fine.”  They were suing me about, died years ago and the company was taken over by his accountants, who were suing me for all this money.  What happened was that we were going to court and the judge told them, there was no way that I copied that song, but because of the similarity, we must talk about a compensation.  Then the mother of the songwriter starting suing her own company who was suing me.  And then, Allen Klein, who used to be the Beatles’ manager that we got rid of (Klein had been suing us for years and then we made a settlement), and he was unhappy having no lawsuits again the Beatles.  So when that man died, he bought the case. So it’s Klein against me.  But Klein was the one who was promoting “My Sweet Lord” so it is a very funny position and the judge doesn't like it.  Ten years ago, Klein did interviews saying that MSL had nothing to do with this other song.  And now it’s the other way round just to get some money off me.  So, it is just a joke, but for a few years, it made me depressed.  Having to go to court and do these things, it’s terrible.  It’s a pain in the ass.