After seeing photos of The Beatles with the Maharshi in Wales in August 1967, I wondered about the fans that are in these photos.  Were they there to listen to the Maharishi too?  Were they local fans?   I was happy to discover this story written by an unknown fan that was there that day.  It was written right after seeing them during that time.  The printing on this article in the newsletter was hard to read (I sort of enjoy it because I feel like I am breathing new life into this story).  There is one word that I just couldn't make out, but it doesn't take away from the story at all.

As told by an anonymous girl in Wales

We left the house at about half-past six the same night, and we made our way to the college.  We came up to the main gates where a crowd of only 15 people were there.  We saw Marianne Faithful across the courtyard, but we weren’t satisfied at only being outside the college.  We walked along the road by the college.  We walked along the road by the college and found a small path going alongside the college.  This path led to an archway just about 50 feet from the building in which THEY were in.  We dared not go any farther as there was a policeman with an absolutely huge ______ guarding the door.  We waited there for about half an hour and decided to ask one of the men if the Beatles would be coming out soon.  He was very nice and said that the Beatles would be coming out before long to go to a lecture in a hall about 100 yards away.  We dashed along to the hall to find that we were the first there.  The crowd gathered before long, but it was only a small crowd of about 60.

I had a present for Paul.  It was a huge fluffy flower on a stick.  I had inscribed on the stick “TO PAUL FROM DILLYS”.  The followers of Maharishi began to come to the hall.  We had a talk from a lady, warning us that The Beatles were here not for singing but for meditating.  And that we shouldn’t’ scream or mob them.  I was beginning to get nervous by now and wishing that I wasn’t in the front row of the queue.  But suddenly there was a blaze of flashbulbs and I heard a cry from my sister, “Oh isn’t Ringo good looking!”  And there walking towards us were John and Ringo.  They both said “Hello” to us and they were so close that we could have rubbed shoulders.  They walked slowly by – they are so better looking than their photos.  John was clean-shaven, but Ringo had a mustache.  George followed them.  He also said “Hello” and flashed a quick smile which showed those gorgeous white teeth.  George had a mustache and his hair was almost reaching his shoulders.  And following George was Paul!  His tall slim figure was easily recognizable.  His pictures do not do him any justice at all.  He walked slowly up by me.  I clutched my present in a shaky hand and I told myself that it would be now or never.  I took a deep breath and I put my present in his hand.  He turned around and looked at me. He is so good-looking.   His hair is black and shiny, his eyes slant, and are gentle.  He said, “Oh, is this for me?”  I said, “Yes, it’s a present for you.”  He said in a sincere voice, “Are you sure you don’t’ want it back?”  I could just about manage to say, “No, you can keep it.  It’s a present.”  He clutched the stick to him, took one step forward, looked back again and smiled (and oh what a gorgeous smile), and said, “Thanks love” in that gorgeous Liverpudlian accent.  For the next five minutes, I could only say “He spoke to me.  He spoke to me.” 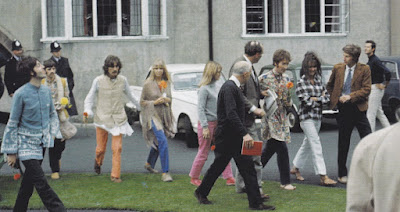 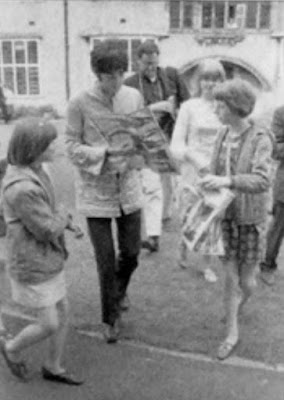 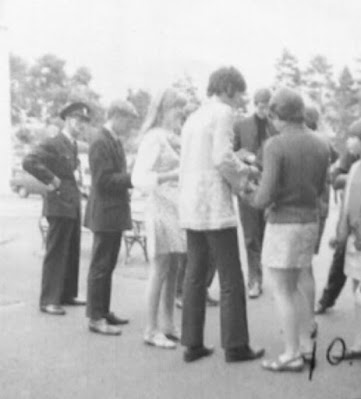 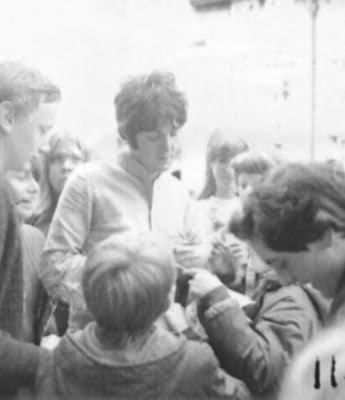 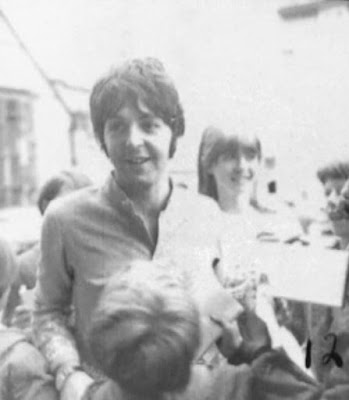 After the crowd had dispersed my sister and I went to the large windows of the hall.  We went to the nearest window by the stage and watched and listened to Maharishi talking to The Beatles and his followers.  Maharishi and the Beatles sat on the stage, and the followers sat on seats in front of the stage.  Paul wore an ice blue Chinese-style shirt, green trousers, and brown leather shoes.  He sat most of the time with his right leg crossed over the left and his hands clutched his right knee. George wore a multi-colored shirt and orange trousers and only sandals on his feet.  Ringo wore a multi-colored shirt, green corduroy trousers, and mustard-color suede boots.  John also wore a multi-colored shirt, white trousers, and only sandals on his feet.  Paul noticed us once and smiled.  But George was the worst.  He kept looking at us through the corner of his eyes every five minutes.  We arrived home at about eleven o’clock that night. 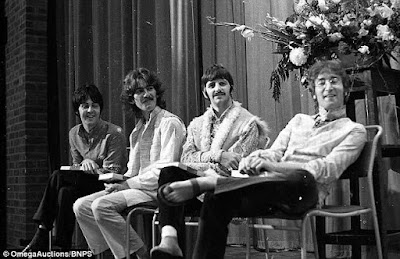 The next day we went to see them again on Sunday.  We were allowed to wait outside the door this time.  We had only been waiting for 10 minutes when John came running out before anyone could ask for an autograph.  Paul was the next to come out, his stepsister Ruth was holding his left hand, and in his right hand, he had a load of newspapers.  I was a bit nervous of asking him for an autograph as he had his hands full.  But I went up to him and asked, “Paul, please may I have your autograph?”  He smiled and said “Sure, love.”  As he signed my book on top of all his newspapers, I told him that my present looked like a large fluffy flower and not like a duster as some people had thought.  He laughed and said that he had thought that my present looked like a flower.  As soon as he had given my autograph book and pen back, he was surrounded by pressmen. 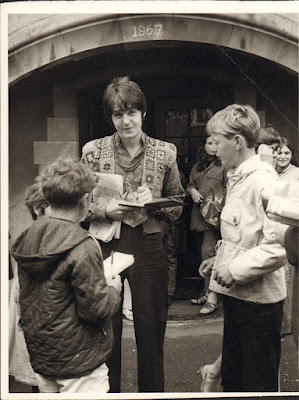 I couldn’t get to Ringo as he was also surrounded by pressmen.  George was only talking to one man, therefore I ran up to him to ask for his autograph.  But it was evident George was arguing with the man.  I stood by George’s elbow for five minutes listening to the argument.  When they had finished talking, George was in such a temper that he didn’t see me and walked away and opened a door and slammed it behind him!  I’m glad I didn’t follow as I might now have a broken nose!  I went home feeling very happy.

But that happiness did not last for long, as that night we heard of the tragic death of Brian Epstein.  I deiced to go up to the college and try to see The Beatles and say how sorry I was.  But on the road to the college, I saw a big, black car passing and sitting in the back was Paul.  He looked pale and his face expressionless. 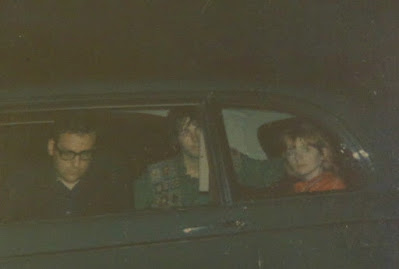