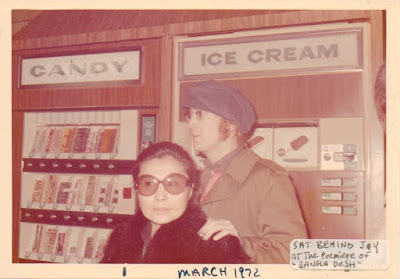 Well, tonight was the first showing of Bangla Desh.  My friends and I decided to go (of course).   I got out of work at 5:30, there were 2 shows, 6:30 and 8:30.  We were hanging out by the front of the theater.  People were in line, everyone had tickets (invite only).  We thought we were never going to get in.  It’s now 6:00, Phil Spector arrives, so that’s a start, then at 6:15 Allen Klein comes.  I said to my friends, “I’m going to talk to Klein.”  They looked at me like I’m crazy.  “You don’t just talk to Klein.”  Well, I got my nerve up, walked over, and said, “Excuse me, Mr. Klein, I have 2 tickets for the show, but I have an extra friend.”  He stopped me and said to the doorman, “let them in.”  I didn’t have the 2 tickets, I just thought I’d try it.  Well, it worked.  They didn’t ask for the tickets which was lucky.  We got in after Ravi finished.  Just in time for George.  The movie was great, the close-ups were too much.  The sound is great.  The audience in the movie was in four speakers in the back and the music and talking up front.  TOO MUCH!  The movie was fabulous.

Getting back to us, after the movie we went upstairs to look around.  We hid in the bathroom.  Meanwhile downstairs they were letting the people in for the 8:30 show.  So, we took a chance and went into the lobby and my friends were looking a different way when I saw a whole lot of flashes going off.  I said, “Someone is coming.”  It was John and Yoko.  We got some really great shots.  He was wearing a hat sideways, long army coat, his cowboy boots, and jeans.  Yoko was wearing a black short fur jacket and jeans, her hair tied back.  We followed them upstairs to the first balcony.  We sat (again) one row behind them.

I got really upset at these young girls (about 13 or 14 years old) who asked him if they can shake his hand, and they really took advantage of his good mood.  Yoko looked like she was in a bad mood.  Phil Spector started to push them (the girls) away after a while.  I don’t blame him. 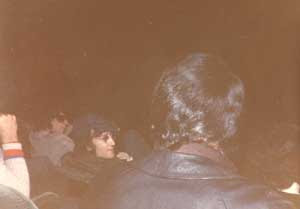 The movie took a while to begin.  John yelled out “Let’s see the movie!”  10 seconds later the movie started.  Oh, before that happened some really stupid girls asked him to say “hello.”   He said “hello.”  Then they asked him to say “George.”  He said “George.”  I really felt bad for him.  I know how The Beatles felt when all those cripples used to touch them.  He looked and sounded like a trained puppy.  It was really bad.  When the movie started, Yoko and him asked Jerry Rubin to buy some popcorn and candy, and soda for them.  So, he disappeared for a while.  John smiled when Rich did “It Don’t Come Easy” and when George sang “While My Guitar Gently Weeps.”  He was toe-tapping and bopping his head when Leon Russell did his songs.  John also pointed out Klaus for Yoko.  Why – I don’t know. She knows him.   They smoked ciggies like they were going out of style.  Then Jerry Rubin came back and gave something to John.  I couldn’t see what it was, but my friend turned to me and said really seriously, “Jerry just passed John and joint.”  I was so upset.  Plus why smoking pot in the movie?  It stunk the whole place up.  They looked so stupid and everyone knew exactly what they were doing.  They (John, Yoko, etc) thought they were being really cool about it, but they really weren’t.   After Dylan finished his songs (before George did Something and Bangladesh), John, Yoko and Jerry left.  Oh, Phil Ochs was with them also.  We beat them downstairs to their car, took some more pix, and went out to eat.

Note from Mar (editor of the newsletter):  Thanks for this, Marcy.   I know a lot of people have a lot of ideas about pot, but John doesn’t have to smoke it to be cool.  I for one don’t’ go into that thing, but I don’t’ condemn anyone who wants to do it.  People here always smoke it in the theaters.  As a matter of fact, the guy in front of us at the showing of Bangladesh was smoking it.   The girl next to him asked if he would put it out because if he was caught it would ruin it for the rest of us.  He was nice enough to do so.  The only real beef I have about it in the theater is it (the smell) gives me a big headache.  So, let’s not condemn, but accept.