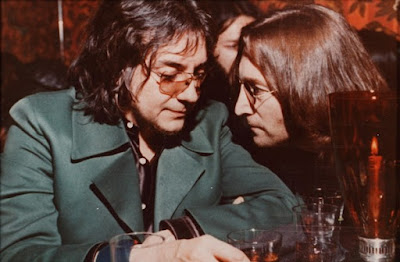 Be on the lookout for a lot of fan memory stories in the upcoming months!  I was just gifted 6 huge boxes full of Beatles fan newsletters and magazines.   They are full of amazing stories of people that met the Beatles!   I have dug into box 1 and am going to start sharing some of the discoveries.   The first one is a quick story of a brief meeting with John outside of the Plaza Hotel in 1974.   The photo above was taken just a few hours before this encounter happened.

On Saturday December 21st, much to my surprise, I found myself standing in front of Lennon’s 5 o’clock shadow face.  Oh no!

Sue Link and I were standing outside the Plaza Hotel waiting for none other than Hari.  Of course, he never did come out, though Sue did speak to him on the phone, by accident.  Anyway, as we were standing outside the hotel (Sue on one side, Laura and 2 others on another side, and me in the corner), I saw Laura and the others crowd around a man.  Now, John was the furthest thing from my mind, and I just kept looking and squinting wondering if that was him.  As I started to walk up to them I realized it was John!!  I walked (or should I say RAN) up and just stood in complete awe in front of him.

He was signing an autograph and I looked straight at him and said, “John?”  He seemed to be in quite a hurry and now I know why.  (Quite unfortunately one of the girls was standing back there saying “I love you, John, I love you, John.”)  He looked up at me and I smiled.  I said, “Thank you, John.”  He pushed the pen back in Laura’s hand and said, “Oh, that’s all right,” turned and walked away.  It was one of the strangest feelings I’ve ever experienced.  My head was screaming “OHDEARGODTHANKYOUFORTHISEXPERIENCEOHSHITJOHNIFYOUONLYKNEWHOWMUCHILOVEYOU”

Unfortunately, I missed seeing Julian and May Pang.  They were standing there in back of John waiting for the limo.  God, I could kill myself for missing Julian.

I just wonder if John had any idea of what I mean by “Thank you.”  I wanted to say “Thank you for all the happiness you’ve given me” but it just came out “Thank you.”  Jesus, it was so good to be standing right next to him.  It made me think of all the dreams I ever had that seemed unreachable.  This dream came true and it was one of the greatest experiences of my life.