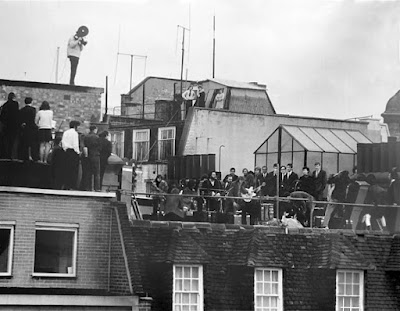 For many years I have been discovering who was present on January 30, 1969, to witness The Beatles rooftop performance.    I hit a dead-end until the recent release of the Get Back documentary where more and more witnesses are being discovered.   One such person that has come forward is Jenny Spruill, who watched some of the performance after a co-worker told her to go out to the fire escape and see what was going on.    I discovered this article on Starline News Online.
Article written by John Stanton
Published December 3, 2021

People around the world have been watching The Beatles' final days as a group in "Get Back," Peter Jackson's sprawling, nearly-eight-hour documentary, which debuted Nov. 25 on the Disney Plus streaming service.

At least one local woman, however, witnessed the documentary's climactic scene first-hand.

In 1969, Jennifer "Jenny" Spruill, a native of England who has lived in Hampstead, north of Wilmington, for more than 20 years with her husband, Jack, a North Carolina native, was working at an office in central London.

During "a pretty dark and dreary" day on Jan. 30 of that year, Spruill said, a man she worked with asked, "'Why don't you go out on the fire escape? Something's happening.'"

Her office was on the fifth floor, so Spruill and two co-workers climbed to the sixth-story fire escape and stepped outside.

"And there were The Beatles," Spruill said — John Lennon, Paul McCartney, George Harrison and Ringo Starr, along with the organist Billy Preston — playing what would prove to be their final live "show" as a band.

The funny part, she said, is that she wasn't exactly a Beatles fan.

"You probably couldn't have paid me to go to a Beatles concert," Spruill said, although these days she's changed her tune. "Of course, I am (a fan) now. I think they're amazing."

And while she stayed watching the band play for longer than some she worked with, Spruill said, eventually she began thinking, "Gosh, this is noisy," and went back inside before police put an end to the impromptu concert, which lasted for less than an hour.

It's a wonderful story, and one Spruill has told to family and friends many times over the years. But if you're skeptical, well, the proof is right there on the screen.

And while she's always believed her mom's account, "We had never been able to find her in any footage," Fiona Spruill wrote on her Twitter page Dec. 1. "Until tonight."

Watching for her mother in the documentary, Fiona Spruill finally spotted her between 1:42 and 1:44 of the third episode of "Get Back," "Standing on the roof of a white building about three stories up behind Ringo's head."

"They worked really hard to find me" in the documentary, Jenny Spruill said with a laugh.

Fiona Spruill's tweet — "'Get Back' is a wonderful documentary but did you find your mom in it? BECAUSE I DID" — had nearly 6,000 likes as of Friday.

Having a place in pop music history as one of the only people to witness the final Beatles performance isn't Jenny Spruill's only claim to fame.

As Jennifer M. "Jenny" Trewby, she grew up playing tennis and competed in London's famous Wimbledon tournament between 1958 and 1964, amassing a 1-6 record in singles, 0-1 in mixed doubles and 2-5 in women's doubles, reaching the tournament quarterfinals in 1963.

In fact, her tennis connections led to her working in central London's fashion district, where The Beatles' Apple Corps headquarters, the site of their rooftop show, was located at 3 Savile Row. Spruill was working in the promotions department of Fred Perry sportswear, named for and started by the British Wimbledon champion.

Jenny Spruill said she and her husband just got back to Hampstead this week after spending four months in London. She hasn't watched the "Get Back" documentary yet, she said, but she plans to.

Email ThisBlogThis!Share to TwitterShare to FacebookShare to Pinterest
Labels: 1969, Get Back, Get Back Observations, rooftop concert, Watching the Roof