The Real Story Behind "She Came in Through the Bathroom Window" 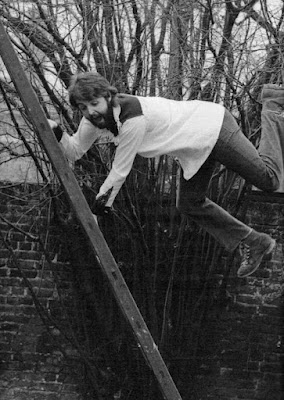 The Real Story Behind “She Came in Through the Bathroom Window”

The story behind The Beatles song, “She Came in Through the Bathroom Window” is well known by fans.  Paul repeats the story often and it is even in his book Lyrics.    The story goes like this:  There were a group of girls that always hung around outside of Paul’s house on Cavendish Avenue.  They were called The Apple Scruffs.   One day, when Paul and Linda were out of town, the girls noticed that the window on the top floor of Paul’s house was left open.   They were able to open the gate and went onto his property and saw there was a ladder leaning up near the open window.   The girls climbed up the ladder,  went through the window, and landed inside of Paul’s bathroom.   While they were inside of his house, they took Paul’s trousers and other dirty clothes as well as many carousels of photo slides taken by Linda.   These slides included photos of Paul and Linda’s wedding, Paul and his family on holiday, and photos of the Beatles during the Get Back sessions.    Once Paul learned about all of this, he wrote the song and recorded it for the “Abbey Road” album.

While that might be the story that has been told, it is not the true story behind the song.  If you have watched the “Get Back” documentary, then you will have heard The Beatles rehearsing the song in January 1969.   Therefore, the song had to have been written prior to that date.   Already the facts do not add up with the “official story.”   If the fans stole photos from the Get Back Sessions and Paul and Linda’s wedding then how can Paul write a song about something that hadn’t happened yet?

The story behind the song is a story that was told by The Moody’s Blues member, Mike Pender.   Mike said that an incident happened to fellow band member, Ray Thomas where a girl had climbed through the bathroom window of his home and got into bed with Ray and spent the night.   The day after this happened, the Moody Blue’s members were telling Paul McCartney this crazy story.  Paul had a guitar in his hand and he started to strum and sing “She came in through the bathroom window….”

In September 1969, John Lennon was interviewed about the songs on the Abbey Road album and he had this to say about the song, “"It was when Paul and I went to America to publicize Apple about two years ago, and we were just in the flat we were staying in and he just came out with that line, 'she came in through the bathroom window.' So, he had it for years, and he eventually finished it."   John remembers Paul working on the song when he and Paul were in New York City in May 1968.    John was asked about the song again when he was interviewed by Playboy for the 1980 interview.   He said, That was written by Paul when we were in New York forming Apple, and he first met Linda. Maybe she's the one who came in the window. She must have. I don't know. Somebody came in the window."

This does not mean that no one ever broke into Paul’s house.   Last year I read a book that had a chapter about how a young girl and her friends broke into Paul’s house in 1970 and took photos of themselves in the various rooms of the home.    Fans going into Paul McCartney’s home without his permission seemed to be an ongoing issue in the late 1960s and early 1970s.  One group of fans must have gotten into his house while he took Linda and Heather on holiday to Portugal in December of 1968.   This would explain why he says something about how this recently happened to him before starting to practice “She Came in Through the Bathroom Window” during rehearsals in Twickenham in early January.

The next part of this story that is untrue is the statement that The Apple Scruffs went into Paul’s home through the bathroom window.   The group of tight-nit fans that named themselves “The Apple Scruffs” started using the name in the Autumn of 1969 AFTER the Abbey Road album had been released.   That small group of fans were not the type that would break into Paul’s home and take his personal property.  They loved the Beatles and made sure not to cause them harm.    It is an insult to those particular girls that Paul and others flippantly say that they were thieves.

The event that is often believed to be the inspiration for the song happened in June of 1969 while Paul and Linda were gone (I personally believe the date most likely was June 15 – Father’s Day due to the weather and day of the week that had been told during the various tellings of the story, but that is just an educated guess).    There were several groups of fans that spent their time outside of Cavendish Avenue at that time.   They were not all friends with one another and there was some of the typical “girl drama” that tends to go on along with groups of young women.   One of those groups of girls really disliked Linda and went out of their way to do cruel things toward her.   It is believed that it is this group that took the items from the home.   Most stories say that a girl named “Diane” or “Little Di” is the person that physically climbed the ladder and landed in the bathroom sink on the upper floor of the McCartney family house.   However, I have seen other names of girls that went up the ladder.    Whoever she was, she went inside and then supposedly let the other girls into the home.   While there the small group of three girls went through the house and went through Paul’s clothing.   Diane gave an interview in the 1990s for a French Beatles fans magazine and said this, “I didn’t take anything that has value, nothing but memories. I searched his basket of dirty laundry and took some shirts that had tea stains.  We took one each.  We looked in the closet and saw all the costumes:  Sgt. Pepper and shoes with the pointed tips he wore in the beginning. We did not touch.”

More than just dirty shirts were taken from the home.   Slides of photographs taken by Linda were also stolen and also a photo of Linda and Paul in a nice frame (Paul and Carol Bedford claim it was a photo of his father) was taken.   Paul was not too bothered by the missing clothes, but he really wanted to get Linda’s photographs back.   He spoke directly to a few of the girls that would eventually be in the Apple Scruffs and asked them to help him.  They were eventually returned to Paul, but not before copies of the photos were made.   These photos, which we still see to this day, were sold outside of EMI studios on Abbey Road while hundreds of fans stood outside to catch a glimpse of John, Paul, George, or Ringo before or after a recording session.

It is very possible that this big break-in, which happened just prior to the recording of “She Came in Through the Bathroom Window” as it appears on the Abbey Road Album reminded Paul of the song that he had begun working on the previous year.  It very could be why he brought it back to The Beatles and it was included on the album.   However, it is a crazy coincidence that Diane (or whoever) climbed a ladder and went through the bathroom window, just as the girl did with the Moody Blue’s member years before.   Simply put, the event in the early summer of 1969 was not the original inspiration for the song, but perhaps the inspiration to bring the song back and record.

I am sure that Paul gets his stories confused easily because that is how our minds work when it comes to memories.   As humans, we frequently combine events that happen at the same place during the same time period.  Paul is not trying to be a Beatles historian, but just remembering things that happened in his life.   I do not believe he is purposely trying to give the girls in the Apple Scruffs a bad name, but sadly that is what has happened.   I asked one of them if I could write something to attempt to right this wrong.   She said she would be happy if I did.   Today the truth is on the new Apple Scruffs webpage and hopefully, upcoming books, such as Mark Lewisohn’s biography (volume 3) will contain the correct information.