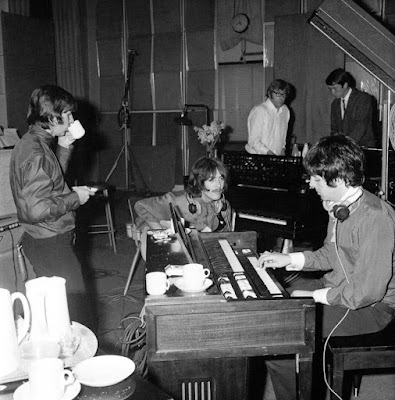 The Beatles Book Monthly is a gift that just keeps on giving.   After sharing what Mal had to say about the Get Back Sessions, I wondered what else, he, had to say about other sessions.   I found this Q&A with Mal from the February 1969 issue where he answers fans' questions about the newest Beatles album at that time, The Beatles.

Last month I told you I'd been ploughing through a huge mountain of mail from Beatles Monthly readers on the subject of the recent two-record album set.  Of course, many of you asked the same questions so I've been able to choose just 40 favourite queries from your letters for the WHO-WHAT-HOW piece which follows.

1.  Where was the photograph taken which shows Ringo (bearded) dancing with Elizabeth Taylor?

Answer:  During a party at London's Dorchester Hotel

2. Which Beatle put his lip prints on the album picture poster?

3.  Is the cat behind a cushion in one of the colour photographs Paul's Thisby?

4.  On the poster with the album there's a big picture of someone lying back in a bath.  Is it John or Paul?

Answer:  Fellow with soap suds all around his head is Paul.

5.  There's one very old snapshot showing two boys in black leather gear  It looks as though it might be a picture of two Beatles taken in Hamburg days but the heads are cut off.

Answer:  It is indeed an early Beatle pic but not taken in Hamburg.  That's Paul with John in Paris.

Answer:  John and George together.

7.  Who plays the main guitar accompaniment behind John's voice on "Dear Prudence" and what sort of guitar was used?

Answer:  John played his own backing here and used his Epiphone guitar.

8.  How was the violin-like effect achieved at the end of "Glass Onion?"

Answer:  Would you believe -- with violins!

11.  Who sings the line "Not when he looked so fierce" in a sort of childlike voice on "The Continuing Story of Bungalow Bill?"

Answer:  Wasn't one of the fellows at all, it was Yoko.

12.  Who plays guitar (the introduction and accompaniment) behind George's singing on "While my Guitar Gently Weeps?"

Answer: Eddie Clayton -- but not the Liverpool Eddie Clayton (remember Ringo was once with the Eddie Clayton Skiffle Group on Merseyside around the first half of 1960 before he began drumming for Rory Storm's Hurricanes).

13. Does Paul play his own piano accompaniment for "Martha my Dear?"

Answer:  Yes he does.

14.  Which album track has Mal Evans playing a bit of trumpet?

15.  Who plays acoustic guitar behind Paul on "Blackbird?"

Answer:  Paul himself.  He recorded the accompaniment first and then did the vocal.

16.  How does George get that funny nasal effect on his voice midway through "Piggies"

Answer:  I don't want to get too technical about this so let me just say that his voice had to be filtered through special studio equipment to create that effect.

17.  How plays guitar accompaniment behind Paul on "Rocky Raccoon?"

Answer:  Again it's Paul himself and again the singing and playing were recorded at separate times.

19.  Who plays that honky-tonk piano bit at the end of "Rocky Raccoon?"

Answer:  Nobody plays an organ but the sound you mean comes from a specially prepared piano played by Ringo.

21.  What instruments are behind Paul on "I Will?"

23.  Did Paul write "Mother Nature's Son" while he was on his farm up in Scotland?  It sounds as though he was inspired by his surroundings.

Answer:  I know what you mean about the atmosphere of the words but John and Paul wrote this while they were in India about this time last year.

24.  Details please of the backing on John's rocker "Everybody's Got Something to Hide Except for Me and My Monkey."

25.  Whose idea was the extra ending for "Helter Skelter" and who sounds at the very end of it "I've got blisters on my fingers."

Answer:  THe extra ending was a joint idea really and none of the fellows can remember who suggested it.  The blistery voice belongs to Ringo.

26.  Is Ringo's drumming speeded up in some technical way at the end of "Long Long Long" or did he play as fast as that?

Answer:  He really played as fast as that!

28.  How did Paul make his voice sound like an old gramophone record for the words "Now she's hit the big time" in "Honey Pie?"

29.  What brass instruments are there on "Savoy Truffle?"

30.  Whose voice says "Number Nine" at the opening of "Revolution No. 9?"  It sounds like John or Mal.  Is it the same voice later on?

Answer:  Yes, the same voice all through but it doesn't belong to me or John.  It was taken from an educational record from library stock.

31.  Before "Revolution No. 9" you hear a bit of conversation with someone saying to George, "I'd have brought some claret for you, George, but I forgot.  I'm sorry.  Will you forgive me?"  The voice didn't sound like Neil's or Mal's.

Answer:  That's because it wasn't Neil's or mine!  It was Alistair Taylor's voice.  Alistair is office manager of Apple.

32.  Did Geroge Martin do that beautifully warm orchestral arrangement for Ringo's "Goodnight?"

Answer:  Yes he did.

33.  Did Paul make a mistake when he was recording the vocal of "Ob-la-di Ob-la-da?" towards the end Desmond stays home to do his pretty face instead of his wife, Molly, the band singer?

Answer:  No mistake.  Just a twist around of the verse which comes earlier on.

Answer:  Nobody.  It's a harmonium played by George Martin.

35.  Who plays the harpsichord (or is it a doctored piano) on "Piggies?"

Answer:  It is a harpsichord and the player is George Martin's assistant whose name is Chris Thomas.

36.  What are the extra instruments heard on "Dear Prudence?"

Answer:  Apart from the normal line-up of guitars and drums, you hear Paul on the piano and playing flugelhorn, John and I on tambourines, and a whole crowd of us including Jackie Lomax and Paul's cousin John lending pairs of hands for the clapping.

37.  Why did you release the album set in stereo first and not in mono until later?

Answer:  We didn't!  The fact is that for the first week or two at the end of November the factories just could not keep pace with the public's demand for copies of the album.  So in some places, you'd find a record shop had only stereo copies available because fewer people choose stereo and the really big demand is still for mono records.

Answer:  Other than the usual instrumentation we had George playing acoustic guitar and Paul on Hammond Organ.

39.  Is the chorus on "Goodnight" just the Beatles singing? It sounds like far more than four voices in the background.

Answer:  It is far more.  Eight in fact.  Four boys and four girls who were brought in to add the backing voices.

40.  Who was the first to make another recording of a song from "The Beatles" to put out as a single?

Answer:  We heard of several all at once.  Including the Marmalade doing "Ob la di, Ob la da", Cliff Bennett singing "Back in the U.S.S.R." and the Vic Lewis orchestra singings doing versions of "Goodnight" and "Julia."