Mal's version of George's walk out

So much has been talked about the amazing Get Back documentary lately.  There has also been a renewed appreciation for Mal Evans since watching him in the film.   Everyone here knows how much MTBFR loves Mal Evans.  I spoke up for him and called him the 6th Beatle during a panel at the Fest several years ago.   Mal had a special bond with the Beatles fans and he has a very special place here where his fan gather.

Anyhow -- this got me all thinking about how Mal used to write for the Beatles Book Monthly.  So I dug into my archives and found the March 1969 (issue 68) and typed up this information Mal wrote about George leaving The Beatles recording session.   I always figured that the things Mal wrote for BBM wasn't the 100% story, but the PR friendly version of events.   BBM was the Beatles magazine and they never would want to put the boys in a negative light.   However -- having seen the film, when I went back and read what Mal wrote, I realize that it really wasn't too far from the truth.    I will be sharing the rest of what he wrote for the magazine in issue 68 this week.    I find it fascinating after watching the new documentary. 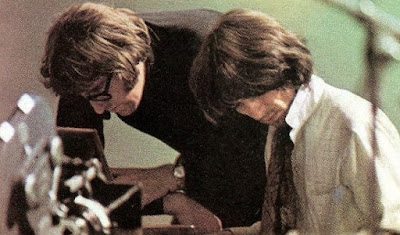 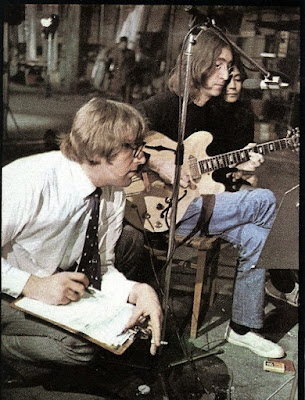 Mind you, when rehearsals started on January 2 the basic idea of the whole project was different.  You might think it was surprising that the fellows should want to plunge straight into making another LP right after Christmas when 30 new tracks had only just gone out on the November double-disc album.  Well, the thinking behind it was this.  They wanted to put something quite new before the public.  The film clip they’d done for “Hey Jude” was such a success that The Beatles wanted to expand the same format of performing “live” in front of an audience, letting the fans join in and get a bit of a party mood going, into a full-length TV show.  An hour of Beatles numbers, one after another, no guests stars and very little filming done outside where the concert performance was to happen.

So the January work began in the film studios down at Twickenham with January 18 or thereabouts agreed upon for two or three “audience shows” at which all the filming would be done.

At the same time everyone agreed it would be great to film all the rehearsal work too.  Make a sort of “Beatles at Work” documentary production on the side and quite apart form the TV special, a film which could be saved and shown later, perhaps even 10 years later, to let people see what goes on, what’s to be seen and heard, when The Beatles start off to build up a new set of songs.

We went out looking at different places to hold to the actual show.  The Roundhouse in North London, for instance.  By the New Year we hadn’t found a suitable venue so Twickenham Film Studios were made the home-base as it were for preparatory work.  We looked at an old flour mill on the Thames quite close to town.  We considered a dozen other alternatives in London and in the provinces.  The ideal place was impossible to find – somewhere good visually and good from the sound point of view, both equally important factors for the show we had in mind.

Michael Lindsay  Hogg who had been brought in as show direction suggested Africa.  Certainly we wanted sunshine and if we had to do the filming outdoors the British winter weather couldn’t be relied upon.  Michael and producer Denis O’Dell knew an old Roman theatre on a shore in Tripoli which sounded just the thing.  But that one had to be blown out too.  On Monday, January 13, I was due to fly over to Africa to look at the Roman theatre.  On Sunday, January 12, the fellows finally gave up all ideas of doing the TV show.  Here is what happened.

If you read certain national newspapers at the time, you may well have believed a load of rubbish about George having a punch-up with the others.  It wasn’t like that at all.  There WASN’T a fight, physical or verbal.  There WEREN’T any tempers or shouting.  I just couldn’t believe it when I saw the press afterwards.  So, to set the record straight, here’s the truth behind George’s “walk out” and the canceling of the TV special.

Of the four Paul was the most enthusiastic all along about doing the “live” show.  John would have gladly taken the whole production unit to Africa or America to find the right location.  John and Ringo had mixed feelings about the plan, agreeing with Paul on a lot of the ideas but feeling this might not be the best way of making a 1969 Beatles TV film.  George wasn’t keen at all.  Ever since the last Beatles tour of America in the summer of 1966 he had considered “one night stands” to be a thing of the past, a backward step for a group he believes should concentrate on perfecting recordings rather than churning out the same programme of too-familiar songs on stages here and abroad.

So on Friday at Twickenham George stated his case.  Singing and playing together would always be fine with him and the last thing he was suggesting was any break up of The Beatles.  So that day, January 10, George didn’t want to stay at Twickenham rehearsing for show he couldn’t believe in.

We were all having lunch when George came over and said very quietly that he was going home. With that he went off, climbed into his car and headed for Esher.   Later he told a bunch of press people, “Look, we’re old enough and wise enough to be past all this punching-up rubbish.  We’ve been through everything together for so long we don’t need that sort of a row.  We discuss things and we finish up agreeing or disagreeing and that’s the finish of it.”

So George’s departure made it impossible to continue with the original project.  If there HAD been a real row the others might have gone ahead.  But Beatles don’t work like that.  If all four are not united on anything it’s dropped in favour of an alternative that everyone likes and wants to be enthusiastic about.

In this case the alternative that George was as happy as the rest about was to continue rehearsing the new stuff, finish writing all the new material which had been intended for the TV performance, but use it for an LP album instead. And to go on with filming all the work both at Twickenham and, later in the month at the Apple recording studies [sic] when the album itself was being put on tape.  One difference was that more than a dozen new songs would be needed instead of the initial eight planned for the TV show.