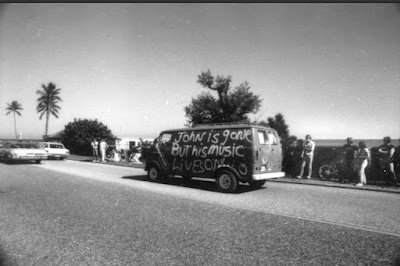 This year has been harder than others.   John was just alive on my television screen.  Seeing him in the Get Back documentary was amazing.   He was so funny and handsome.   I felt frustration toward him at times and I felt amazed to be watching him sing and play the guitar.   He was alive.

December 8th takes me back to the realization that John is not with us in person anymore.   He was murdered.   I will NEVER get over that fact.

I like the message on this van because it is so true.   John is gone but yes -- his music sure does live on!

Email ThisBlogThis!Share to TwitterShare to FacebookShare to Pinterest
Labels: December 8