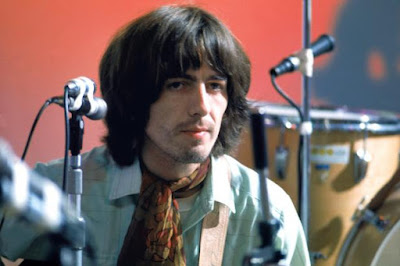 The world lost George Harrison 20 years ago today.   I say that "the world" lost him because his music was appreciated all around the world.    George was a special person.   He was an amazing musician and songwriter.   He had a very funny, dry sense of humor.   His parents taught him to be kind to strangers, and he extended that kindness to his fans.  He was grumpy -- but that just added to who he was.

Having spent the past few days "with the Beatles" with the Get Back documentary, I feel like I have gotten to know George on a deeper level.   I think he held a lot of his feelings inside because it was so hard to bring your new ideas to John Lennon and Paul McCartney.   But he also was a great friend.

I cried when I got the phone call early on November 30, 2001 that said that George had lost his battle with cancer.   I cried again today when I realized that it has really been 20 years without him.

Let's all remember George's last words:  Love one Another.