The Beatles Get Back - A Book Review 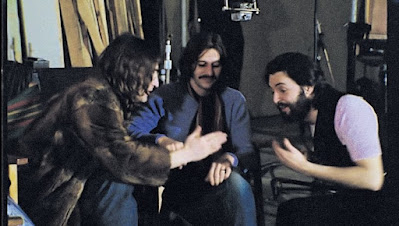 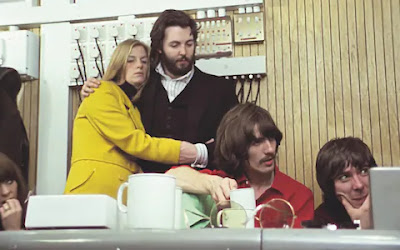 Like many of you, I bought the Get Back book this past week.   I got the Target version of the book, which came with four exclusive Lobby cards (one of each Beatle).  However, I did not open the envelope that is attacked to the back of the book that holds the cards because I didn't want to break the Apple sticker that holds them into the envelope.
After reading the Get Back book, I came to the conclusion that this is one of the most important books about the Beatles that fans should own.   This book, Hunter Davies book and the Beatles Anthology book are the only authorized accounts of the band that have been published.
The book is full of beautiful photographs taken during the sessions for what would become the Let it Be and Get Back films in January 1969.   All photographs were taken by Ethan Russell, Linda Eastman, or Terence Spencer.  The other photos are frames from the original footage shot for the film.   The dates of these photos are given, which is something that makes me very happy and will help me a lot in sorting my Beatles photos.
The text itself is the word-by-word transcription of the Nagra reels.  If you have heard the bootlegs of the Get Back sessions, then you will be very familiar with the discussions  found in this book.   Seeing the words in print, cleared up some areas of the tapes that I didn't understand or misheard.   For words that were used that would have been known for those in the conversation at that time, there is a small explanation in parentheses.   This has helped clear up so many things for me.
A few things that I noticed:  Paul would not drop the conversation about performing in front of an audience.  This topic comes up over and over and over.   Paul and Ringo were annoyed with Yoko being around all the time, but it wasn't a huge deal to them.   They didn't want to upset John and decided to not bring it up and just accept that she was always going to be with John.   I loved the comment Paul said (paraphrase), "I don't want people in 50 years saying that The Beatles broke up because Yoko sat on an amp."   And that is exactly what people today say!
The Beatles made a lot of jokes and laughed a lot.  Some of their jokes were Beatles jokes that fans today still make.   They also liked to read about themselves in the newspapers every day and laughed about how wrong the news seemed to always be.   They also argued quite a bit, but the arguments never were ugly.  There was never any name calling or cheap shots.    Something happened between George and Paul during the recording session for Hey Jude that Paul did not want to happen again.
If you weren't sure if you should buy the Get Back book -- let me tell me that you do!  This book is really going to be amazing once the film is out next month.    We have heard the words spoken and have now read them -- but to see the expressions on their faces while they are saying it is going to bring the entire story together.   You are going to want to have this book before you watch the new film because I am sure you will want to go back and refer back to it to check some of the conversations that aren't clear.
Posted by Sara S. at 9:00 PM