For Immediate Release: Get Back 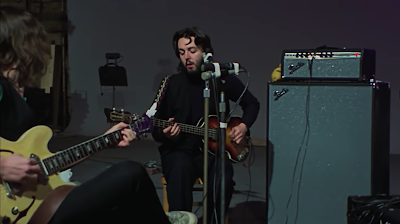 The biggest news in the world of Beatles is about the Get Back book and film that are coming up.  So I found this in my files and thought it was a fun article to share.

Buffalo, N.Y -  Buffalo may not be the hippest city in the U.S. but Beatle freaks all over the Western New York area and Canada got a chance to hear the December scheduled release of the jam album "Get Back" on WKBW-AM Radio, September 20th, 1969.

The chain of events leading to this remarkable occurrence started a week earlier when "KB" got an advance tape of the Beatle's October release album "Abbey Road."  Twice an hour a cut was played from the "Abbey" album with the word that the upcoming weekend (19-21) would be a "KBeatle" weekend with sixty copies of "Abbey Road" to be given away to listeners for identifying earlier Beatle works on the air.

Suddenly, early Saturday evening DJ, Sandy Beach, announced that a happening would take place that would make history.  How right he was.

Through highly sophisticated means of promotion between the station and Apple the entire "Get Back" album was played between 6:30 and 7:30 with only a break at seven for the news.   All commercials were given prior and after the playing.

The album is exactly as reported in the September 20th issue of Rolling Stone.  The only major gripe with the airing had to do with "KB."  Several times during each cut a taped announcement saying that this is "A KB Exclusive" was first added sounded over the album.  This, of course was done to stop pirates from taping the album for illegal sales similar to the Dylan situation.

It is also regretful that listeners are the Pavlovian Dogs to "KB" and Apple since they are given juicy cuts to hear and not yet own.  Local listeners will have to wait from two weeks to two months or more before these albums are available at their favorite record outlets.

Also worth nothing is the fact that "KB" is holding a contest for an original manuscript of "Cold Turkey," a song written by John Lennon while he was in Toronto for the Rock & Roll Revival.  On the other side of the paper, written by Yoko Ono, is the order of the set they performed in Toronto.  A fine piece of memorabilia for the true Beatlemaniac.    DICK PORTERFIELD

Email ThisBlogThis!Share to TwitterShare to FacebookShare to Pinterest
Labels: 1969, article, Get Back, Paul McCartney