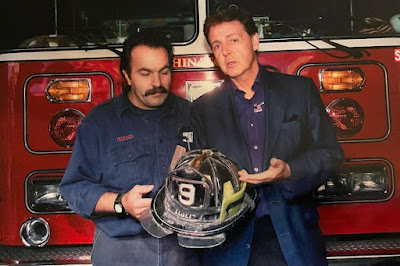 20 years ago today was one of the scariest days of my life.   Everything changed on September 11, 2001, and while I do not live anywhere near New York City,  I was deeply affected by the terrorist attacks on my country that day.     I am certain that I am not the only person that feels that way.    Sadly, it seems that too many people have forgotten or downplay just how terrible of a day it was.   So many people that woke up that morning and went to work never made it home.    So many brave first responders ran into the towers and never came back out.   So many boarded airplanes and never returned.   It is staggering.   I was 24 years old and in a job that I really did not want teaching at a daycare.  I know I have told the story before, but 9-11 was the event that caused me to quit my job and go back to college to become a reading specialist.   I am now in my 19th school year as a reading specialist.

9-11 was the event that caused Paul McCartney to tour again for the first time since 1993.   He organized the amazing Concert for New York, visited first responders, and wrote the song "Freedom."   I saw Paul in concert in October 2002 in St. Louis.   It was my first Paul concert actually.   I remember everyone had to go through metal detectors, had any purse or bag thoroughly gone through, and have a wand go over you before you could go into the arena.   This took a really long time and it caused the concert to start well over an hour than it was supposed to start.   Everyone was willing to do whatever was asked because we knew it was done to keep us all safe.  Paul performed the song "Freedom" and the place went wild.  There was a feeling of pride and unity singing "Freedom -- talking about Feeeeeeeedom.." with Paul.      For a few years, I felt like the world was a place where everyone worked together and got along.   But today, I feel like no one is united anymore.    Does it have to take a major tragedy to unite people?

Today I want to honor the memory of all of those that died in the attacks on the World Trade Center, Pentagon, and in the airplane that crashed in Pennsylvania.   I also want to honor the memory of those that worked at Ground Zero in the weeks and months (years?) that followed and have died due to cancer and other issues caused by breathing in the toxic air.    I think of the survivors and family members of the deceased that are still dealing with the trauma of that day.

Thank you to all that helped that day.  Thank you to the firefighters, military, police, and medical professionals as well as the citizens that did their best to help everyone on that day.   Your acts of bravery have not been forgotten.