My Ticket To Ride - A Book Review 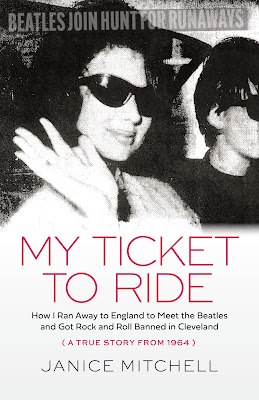 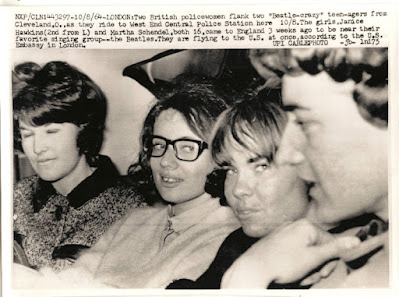 I just finished a really great book called My Ticket to Ride  by Janice Mitchell.   This is the true story of a girl named Janice and her adventures in London in the autumn of 1964.

Janice had a pretty rough childhood in Cleveland, Ohio.  Her parents left her and she lived with an difficult aunt.   Things in Janice's life got better in December 1963 when she first heard The Beatles on the radio.   Like so many other girls, the Beatles and their music made a huge impact on her and she automatically became a fan.   Beatles became her life -- she listened to their music, read the magazines and of course watched them on the Ed Sullivan Show.

Janice talks her best Beatle buddy, Marti into leaving their troublesome lives in Cleveland and traveling to London to start a new life.   A life where they could meet The Beatles, go to the clubs in Soho and work for Brian Epstein.     So the day after they went to the Beatles concert in Cleveland, the two 16 year olds left with their new passports and Marti's college fund money and flew to London without telling their guardians.

The story of two Beatle crazed American teenagers in 1964 London was so interesting!   Janice Mitchell is a very good writer and by reading about her adventure, you are transferred to a much more innocent time in what was the beginning days of "Swinging London."    The girls go to all of the top clubs in Soho including the Marquee, the 2i's, the Flamingo and others that you have heard about.  They hitchhike to Liverpool and meet some very kind boys along the way that helped their adventures.

I really loved this story.   Janice and Marti actually did something that every teenage girl wanted to do in the 1960s.   Sadly they did not get to meet the Beatles, but they sure had a fun time trying!  I was stuck at what an innocent time it was.   Janice had such little life experience and yet no one took advantage of her naiveté and the boys were such gentlemen.

Beatle fans of all generations will enjoy this coming of age story.  It is one that was an easy read and was a lot of fun.  I highly recommend it!