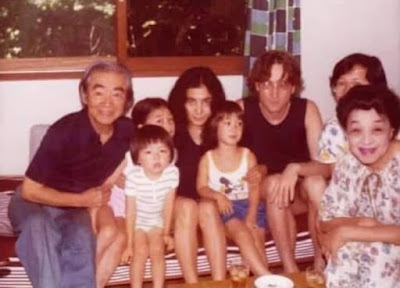 Emi Sugiyama is a cook who is starting to add a vegan day to his restaurant.  He shared this photo of himself with the Lennons and has these memories:

Actually, I started to be conscious of" vegan "when I was young. I happened to have a relationship and was blessed with the opportunity to eat with John Lennon's family and my family in Karuizawa. However, they didn't touch the meat dishes among the various dishes on the table. I was wondering about that, and when I asked my mother later, they said, "They are vegan. They are people who only eat vegan food. ”So, I was surprised by the child's heart that there was such a way of eating, and I remembered it strongly later. When I think about it now, they eat ice cream. I was eating, so I wasn't vegan at the time, but a vegetarian (laughs).