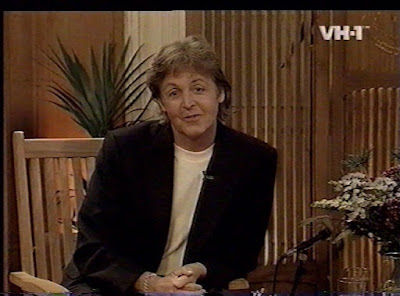 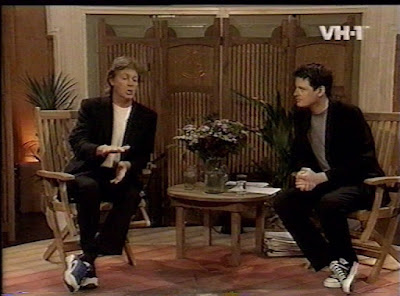 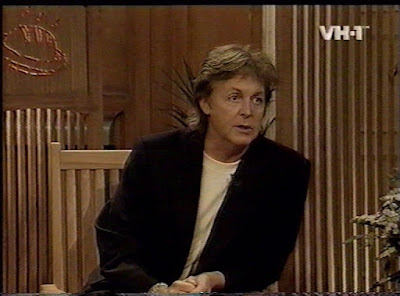 Back in 1997, while Paul was promoting the Flaming Pie album, he participated in his first-ever interview that took place online.   Well -- sort of.   It was part online and part on TV through VH-1.  A lot of people (including yours truly) tried to log onto the site for the chat but got kicked out due to the crappy dial-up we all had back then.     I was actually trying to get onto the chat through my college Internet at the computer lab.  Oh, the olden days!

I found a newspaper article about the chat.  Here is what it is said:

By Clare Longreigg (The Guardian)

His favorite guitarist of all time is Jimi Hendrix, he listens to his children's records, and John Lennon lives in his headphones.

Sir Paul McCartney took to the Internet for the first time last weekend to provide these and many more insights into his life and times in answer to some of an astonishing three million questions fired at him from the world's home computers.

The 90-minute question and answer session was set up by cable music channel VH1, which broadcast the mass interview live last Saturday night.

The response far exceeded the organizers' expectations.  A spokesman for the former Beatle said, "We did not imagine there would be so many questions; we thought there would be only around 300,000.

"No one has been questioned on this scale before.  Sir Paul will be the most questioned man in history."

Although he answered as many as he could of the 3 million questions from fans all over the world, one of the crew calculated that if he had answered them all it would have taken him six years.

While the McCartney camp congratulated themselves on the number of calls, the quality of questioning fell somewhat short of expectations.  One woman asked him what sort of underwear he preferred.  He declined to answer, saying only, "You would not believe the answer, so I will stay enigmatic about that."

Asked what he thought of Oasis, he said he liked them, adding, "If they are going to be derivative, they might as well be something I am connected with."

Many questioners wanted to know about his knighthood (he keeps his gong on the bedroom wall, it has made a lady of Linda at last).  But he considers his greatest achievement to be his children.  "It's not easy to bring up kids when you are in show business.  Me and Linda consider we have good kids."

Another questioner wanted to know whether the Beatles Anthology albums would have inspired them to regroup had John Lennon still been alive. "It's highly likely before the anthologies," he replied.  "We have had lots of offers, but without John, there is no Beatles.  Recording Free As a Bird was as if John was there.  He was in my headphones."

The broadcast went out live to the UK, the United States, and Germany from Bishopsgate Hall in the City of London, and later Sir Paul typed some of his replies in himself.  He declared himself a fan of the Internet.