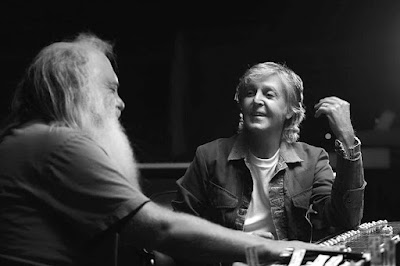 Due to going on vacation, getting Covid and the start of the school year, I am a little late to the game to watch McCartney 3,2,1 on Hulu (If you are in the U.K, it is on Disney+).   However -- I did (finally) get to watch it and thought I'd let you all know what I thought.

In case you haven't heard about it, McCartney 3, 2, 1 is a 6 part series of interviews with Paul and Rick Ruben.   Paul and Rick talk about songs that Paul has written and/or recorded over the years, with the main focus on Beatles songs (some Wings songs are also talked about).   Paul and Rick also isolate certain parts of the songs and listen to the bass line or vocal line in a variety of Beatles songs.

This will be known as one of Paul's best interviews.  He only talks about the music and goes into details like he has never done before.   Paul comes across as very relaxed and really seems to enjoy the opportunity to talk about his music.  Some of the information is old-hat for those of us that have been McCartney fans for a long time.   We know that Ringo came up with the name "Tomorrow Never Knows." We know that Paul came up with the song "Yesterday" during a dream (shockingly he does NOT mention scrambled eggs in this interview!).    There are some nuggets of unheard stories.  I especially like how there were segments that specifically about John, George, Ringo and George Martin. 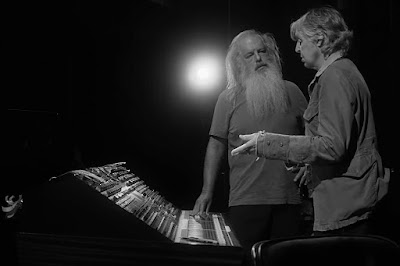 It was also great to hear Paul's bass isolated in many songs.   Paul is a great bass player and it is often overlooked how innovative he could be on the bass.

My biggest dislike about the docuseries is that it used a LOT of colored photographs.   The interview itself was in black and white, which I thought worked well.   But the colorization of Beatles photographs made the whole thing look bad to me.   I also got a little annoyed with Rick Rubin telling Paul how great his music is all the time.   Although I really can't blame him because I might have been the same way.   I also think he "played dumb" a little bit to boost Paul to talk more.   Do we really believe that this producer did not know what a Moog synthesizer is?

As of right now, this interview is only available through streaming and there isn't a release on DVD or Blueray announced.  I hope we are able to save this interview for the archives and take it off streaming because it is one you will need to watch several times to catch all of the information.  This is one Beatles historians will be referring back to for years to come.