How Can You Get to Know a Girl With 50 Big Cops in Your Room? 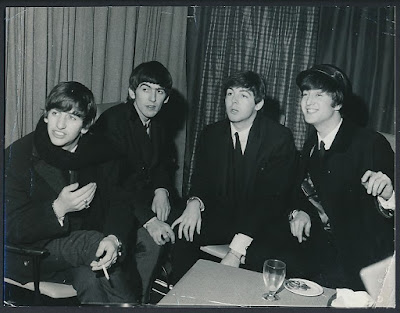 This is a newspaper article that I found in a scrapbook.  I writer of this article is not known and I also do not know what newspaper it came from.

How Can You Get To Know a Girl With 50 Big Cops In Your Room?

"If we went down and sang 'I Want to Hold Your Hand,' to that mob of girls down there, we'd probably get our hands torn off."

"Ring you are, mate." said Ringo Starr, the drummer, who looks somewhat like a Buddist idol and wears a worried frown more often than he wears a smile.

"But it might be nice to shake off our guards and get out and meet them all.  One by one of course.

"I try not to think about the girls," said Ringo.

"I take my mind off them by reading lots of science fiction.  It's my great kick.

"Sometimes I think we've created a more frightening monster than anything I about in my books.

"We're captives of our own creation -- The Beatles, but we can take it -- we're young.

I asked them what kind of girl they'd like to date if they had the opportunity.

Lead guitarist, George Harrison answered, "We like girls with longer hair than ours -- so we can tell the difference."

"Seriously, though," said Harrison, "we're just like anyone else.  We like parties and a bit of fun.  Trouble is, we can't have fun like normal people."

"We tried to get into the Peppermint Lounge.  Lots of twisting down there, but we couldn't do anything.  Everybody surrounded us in one large circle.  So the only thing left for us to do is sit around a big fire at home with our slippers on and watch television.   Once in a while, we even have a pillow fight.  What a life!"

"Don't get us wrong.  We like the screaming fans."

"We'd be dead worried if the girls weren't around.  But sometimes we wish we could get back to the kind of thing we were doing a year ago -- just playing some of the small places around our homes, and having a quiet, date after the show."

"It's only a passing mood, though.  Most of the time we've been living on top of the world.  We love our fans and we'll always have time for them.  They've all been marvelous to us.

"If it was possible, we'd meet them all."

John Lennon -- the married Beatle interrupted:  "Look, if the four of us ever regretted our personal lives being so restricted, we'd pack the job in -- that means quit!"

Ringo reminded Lennon that he had a wife, therefore no girl problems.

"Yes, but it's terrible when I'm away from her, though," Lennon said.

"She's here with me now, but usually we're apart and we have to talk by telephone.

"But the voices don't sound the same.  It's too distant.  I don't like to talk about my private life.  I'd like to keep it separate from this business.

"I want my wife to lead a normal life and not be pestered day and night just because she's married to one of the Beatles.  She never gets jealous about the fans.

"She loves them, in fact.  She's received lots of presents from our fans for herself and for our son.

"She knew what it would be like when she married me.  My wife is very understanding about it."

Ringo looked up from his cup of tea.  He looked sad.  "I'm not really miserable," he said.  "It's just my face.  I really feel amazed about the whole business, the success and all.  Don't ask me to explain it because I can't.

"Everybody wants to investigate us, get inside us, try to understand what makes a Beatle tick.  We've even been questioned by psychiatrists. I couldn't answer them because I never was able to understand the questions.  Long word, y'know."

Ringo -- so named because he wears as many as six rings on his fingers -- p[osed as a strong man, flexing his muscles and gritting his teeth.

"Everyone would get a bit of Ringo for a souvenir."

They all laughed.  "Tell him about the haircuts," Ringo said to George Harrison.

"The haircuts were a complete accident," said Harrison with a smile.  "I was in a swimming pool in Hamburg, West Germany, a year or so ago.  I didn't have a brush or comb and by the time it dried, my hair looked just like it does now.  We decided we'd all wear our hair the same way.  It caught on -- a real fluke."

"We'll fizzle out one day.  It's inevitable.  But it will have been a lot of fun."

"We hope to make enough money before that happens to be able to buy New York and England.  Then we'll tow them both behind a big boat down to the equator.  It's nice and warm down there, and very far away.

"I'm sure even the people who don't like us now would love us then."

"And" chorused the other three, "we'd be able to date the native girls."

Email ThisBlogThis!Share to TwitterShare to FacebookShare to Pinterest
Labels: 1964, newspaper article, The Beatles