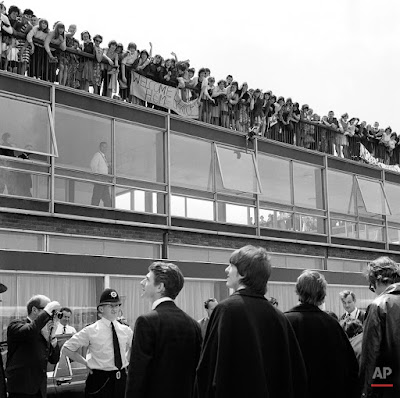 It is International Women's Day!   I was thinking about who the most important women in the story of the Beatles are and really there are a lot of them.    First the Beatles' mothers:  Julia, Mary, Louise, and Elsie are important for not only giving birth to our four guys but for the encouragement they each gave them when it came to music.

Of course, there was John's Aunt Mimi and all of the Beatles' relationships up until 1968:  Cynthia, Maureen, Pattie, and Jane.    Then of course Yoko and Linda were HUGE influences.

But as far as I am concerned the most important females in the Beatles' story would be the fans!  The girls that bought the Beatles records, listened to them on their transistor radios, saw them in concert, joined the fan clubs, waited for them at the airport or hotels, made their own newsletters, scrapbooks, etc etc.   If it wasn't for the fans, who were 90% female in 1963-1964, The Beatles would not have gotten popular.   No matter how great of a band they were, if they didn't have fan buying their records and going to their concert, they would not have gotten popular.

Because of the fans, we have some of the best first-hand historical information.   They kept amazing diaries and wrote letters that documented not only the correct dates of events but also what each Beatle was wearing.   While that might have looked "childish" at the time, it has been invaluable to Beatle historians today.

So I want to wish all of the 1st generation female Beatles fans a wonderful International Women's Day and say a big thank you for all you did for The Beatles and ultimately the fans of today!