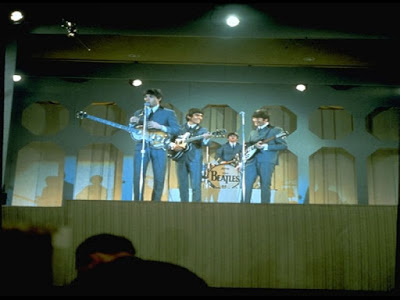 Britain's bushy Beatles, red-faced from days in the sun and nights in the local twist emporiums, ripped through five songs on the Ed Sullivan Show last night with thousands of girls swooning at their booted feet.

The mop-topped minstrels from Liverpool rested after two earlier rehearsals packed with screaming "Beatlemaniacs", brought a dozen rows of teenagers to their feet with "All My Love." [sic]

The audience for the live show at the posh, 5000 seat Deauville Hotel Napoleon room was packed.  Half were teenagers, there to see the Beatles and half were adults, waiting for Mitzi Gaynor.

Mitzi was sweet, honey-voiced and charming.

The Beatles were hot.

After their five songs, the teen idols were prespring, freely -- except for Ringo Starr who played it cool, patted his drums, grinned broadly and shook his shaggy head.

At 10:30am and again at 2:30pm the teen idols slipped from their elegant Deauville Hotel Suit down to the 5000 seat Napoleon Room to practice for their appearance on Sullivan's Show.

The 5000 seats were filled, mostly with teenaged girls for the rehearsals.   As the Beatles left one rehearsal a group of screaming girls surged against police lines.  About 50 guards from a private agency and some 25 police from Miami Beach held the girls back.

Mitzi Gaynor also practiced her numbers and got a big hand from several hundred grownups who somehow found the temerity to fight the teenagers for seats.  Most of the grownups got up and left when she finished her numbers.

When the four singers hopped onto the stage from a private passageway and stepped into the lights, it was bedlam.  Girls shrieked, moaned, cried, gasped, clapped, stood on seats, fell into them, squirmed and jumped as the Beatles went through their numbers including the two-million seller, "I Want To Hold Your Hand."

The teen's shrieking was so loud nobody could hear The Beatles but nobody seemed to care that much.  It was the feeling, man!

Teenagers started arriving at the Deauville hours before the rehearsals.   At one point they were lined four and five abreast for three long city blocks, chatting excitedly about the Beatles.  When the group of girls surged against police lines, a plucky young brunette grabbed Ringo's arm.  She yelled something that nobody could understand and was on the verge of hysteria when a guard pulled her back.

All in all it was a typical Beatle outing. 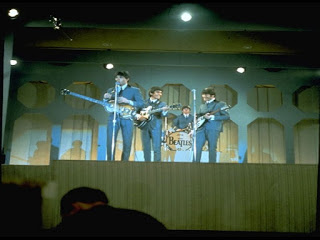