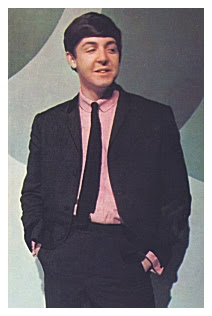 This is the third installment of the 1964 newspaper article series called "Beatles by the Beatles."  The spotlight is on Paul this time.   I think it is so funny to think that the Beatles actually wrote these articles because they are so strange --- but I am sure thousands of girls were fooled in 1964.

One thing I've noticed since we started getting a lot of publicity is that the rumors start flying thick and fast.  People have been saying, for instance, that we all wear wigs.  It's true of course, that John sometimes wears a bald wig. That's only because he discovered the other day that the top of his head was completely covered with hair.

Then there are rumors that I'm engaged or married.  Of course, I have girl friends, but I haven't yet found one I'd like to marry.  And if I do find one, then I'll marry her.

People say it might affect my career.  I don't care. I think it's stupid to put your popularity before your personal happiness.   The important thing is to be a completely happy person, and if you can achieve this through marriage then you'd be daft not to go ahead with it.

But I wish they'd stop marrying me off to girls I've only met once.  I realize that all this publicity is the price you pay for success, but there are times -- only occasionally-- when it can be a bit of a drag.   For instance, if you've traveled five hundred miles and are hungry and short of sleep, you tend to get a bit out of sorts.

"Is it true you've been married five times?"   It's a funny thing, but we're constantly being asked all sorts of profound questions.  But we're not very profound people.  People say what do you think of the H-bomb, of religion, or fan worship?   They want our views on sex and whether we think we're getting too much publicity too soon.

But we didn't really start thinking deeply about these things until people asked us.  And even then, we don't get much time to consider them.  What do I think of the H-bomb?  Well, here's an answer with the full weight of five O levels and one A level behind it.  I don't like the  H-bomb because it could blow me up, and millions of other people as well.

And I don't like the idea that if one man makes a mistake he could blow the world to pieces.  Is that profound?  I don't know, but it's what I think.   Another favorite question is: "Supposing your fantastic success ending tomorrow?  Look what happened to Bill Haley -- aren't you afraid the same thing will happen to the Beatles?"  Well, if it ends tomorrow, it ends.  But we've had setbacks before.  when we first started, Brian, our manager, took some of our tapes to a record company.  They refused them.  They didn't want to know about The Beatles.

But we didn't moan:  "This is the end of the line.  We're finished.  We simply decided to try again with another company.  And as for comparing us with Bill Haley -- well, it's ridiculous.  It's like saying, "Our granny has a wooden leg and so has our kitchen table.  Doesn't the kitchen table look like granny?"

Anyway, I don't think ahead very much.  I just enjoy life while it's good -- as it certainly is at the moment.  And if it goes sour, well, I'll have to think of something else.  I think most of all I'd like to be a really successful songwriter.

But I just don't worry, I suppose I have a got a sort of vague fear about death.  The worst thing about dying seems to me to be leaving everybody behind having a great time.  Is there a life after death?  I just don't know -- so I can't believe it.  Put me down as agnostic.

But let's get on to similar things.  Like John Lennon who I help write most of our songs.  John and I see eye to eye musically most of the time at least when he got his glasses on.  We're always being asked how we write our songs.  Well, I'll let you into a secret.  There are two things we always do when we're going to sit down and write a song.   First of all, we sit down.  Then we think about writing a song.  Sometimes we slog away for hours before we get anything.  Other times an idea comes pretty quickly.  Maybe we'll read something which we'll make a good musical sequence accidentally.

Somehow the songs get written, I suppose we've produced about a hundred altogether though not all of them have been published.  It's funny, but while music is the thing I'm most interested in.  I'm not really mad on playing the guitar and singing.

Sometimes I feel I'd like to learn the piano -- then I get tired of that and think about taking up the trumpet!  Yet I suppose if I were to stop playing guitar and singing for a couple of weeks I'd miss them like mad. Basically, we haven't changed much since we started -- except George Harrison who went all big time for a while and actually started cleaning his shoes.

There is one thing I've noticed about myself which disturbs me a bit.  I seem to get impatient a little more easily.  If there is a breakdown in the organization it sometimes seems to get me down more than it should.

This annoys me.  Because I see myself acting this way and can imagine people saying of me:  "He's a spoilt little..." But I suppose this annoyance is an outlet of some kind.  Of course, if you can be like Harry Secombe -- laughing all the time -- it must be fabulous.  I'd love to be like that.

People have exaggerated the effect that this fan business has on us.  Somebody wrote that we were frightened, lonely and bored.  Well, we are none of these things.

It could get a bit dreary if it went on and on but believe me, we can take a lot more of it.  I suppose for ten percent of the time you miss the privacy of going unrecognized.   Then it can be a bind -- when you want to go out for a quiet walk or something.  But that's a small price to pay for the wonderful time we're having.

What I like most about our music is the fact that there are no musical rules.  It's unpredictable.  You never know if John and George are going to remember the chords.  But mind you, it's more difficult for them because they play their guitars the wrong way round.