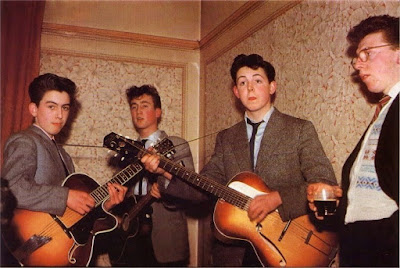 Mike McCartney has announced that he has a new book of photos coming out in April 2021 called Early Liverpool.    It will be full of photographs of his hometown as well as his family and friends from the 1950s-1960s.    Sounds like a great book, however, it is being published by Genesis.    That means that it will be a beautiful quality book, but will be limited in numbers and expensive.   Unless a cheap version is also published, most fans won't be able to own it.

In releasing this news, Mike has released this new photograph of Paul, John and George from March 8, 1958.    He had published the posed photo of JPG  (and Dennis Littler) in his other photo books in the 1980s.   He never ever mentioned that there was an "outtake" photo from the same roll of film!    What other photos did Mike take with this color film?

Those guys look so young and adorable!